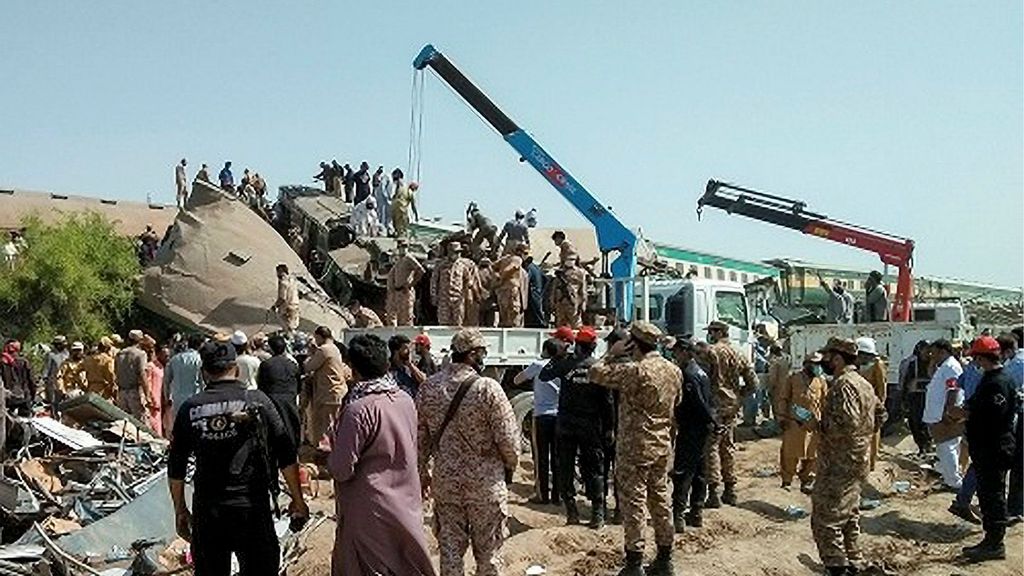 Paramilitary personnel and rescue workers gather at the site following a collision between two trains in Ghotki, Pakistan, June 7, 2021. (Reuters/ANI)

ISLAMABAD — Investigation into a brutal train crash in Pakistan’s Sindh in June has held more than 20 officials, including the Divisional Superintendent of the Sukkur division, responsible for negligence regarding “improper maintenance of the track.”

The authorities concluded that neglect of rail joints resulted in two passenger trains colliding, killing 67 people and injuring over 100.

“I had informed the headquarters well in time about the issues that might lead to the occurrence of any major accident within the operational jurisdiction of the Sukkar division,” said Tariq Latif, Divisional Superintendent, one of the 20 suspects— after being found guilty of the incident.

The accident occurred after coaches of high-speed passenger Millat Express—headed from Karachi to Sargodha—got derailed and strewn across a parallel line, on which Syed Express rammed it and overturned on impact.

The incident reignited debate about the depressed state of Pakistan’s rail network that is believed to be the least funded among other modes of public transport.

Earlier, Pakistan’s train drivers’ association had warned the country’s Railways administration of holding nationwide protests if drivers of the Millat Express and Sir Syed Express were “scapegoated” for the deadly accident that claimed the lives of over 60 people in the Sindh province.

“We will not allow anyone to hold the poor drivers responsible for the tragedy, as there was no fault on the part of the crew of either train,” said Shams Pervaiz, chairman of the Pakistan train drivers’ association.

He also dismissed speculations of over-speeding by Syed Express. He said the drivers had repeatedly informed the authorities about the track’s dilapidated condition “but, unfortunately, no action was ever taken.”

An initial report after the accident had identified poor welding of the rail joint that came apart under the train as the leading cause of eight coaches of Millat Express skidding off track.

However, there was near-unanimous disagreement with what the report put down as the primary reason. Upon inspection, the authorities found that a broken joint had “freshly” broken after being once before and with a cavity of three inches.

In a press briefing soon after, Latif said that the tracks had nearly 6,000 joints, and the welded piece was where the accident transpired. It had been fused with a machine that itself failed to meet quality standards.

The families of the deceased and injured passengers will be compensated by Postal Life Insurance. These include Zobia Qureshi, Tahira Khatun, Shehzad Ahmed, Zafar Iqbal, and Hazrat Tanveer, whose families will be given PKR 1.5 million ($9,126.74), and Azra Bibi, the injured, who will receive PKR 50,000 ($304.22).