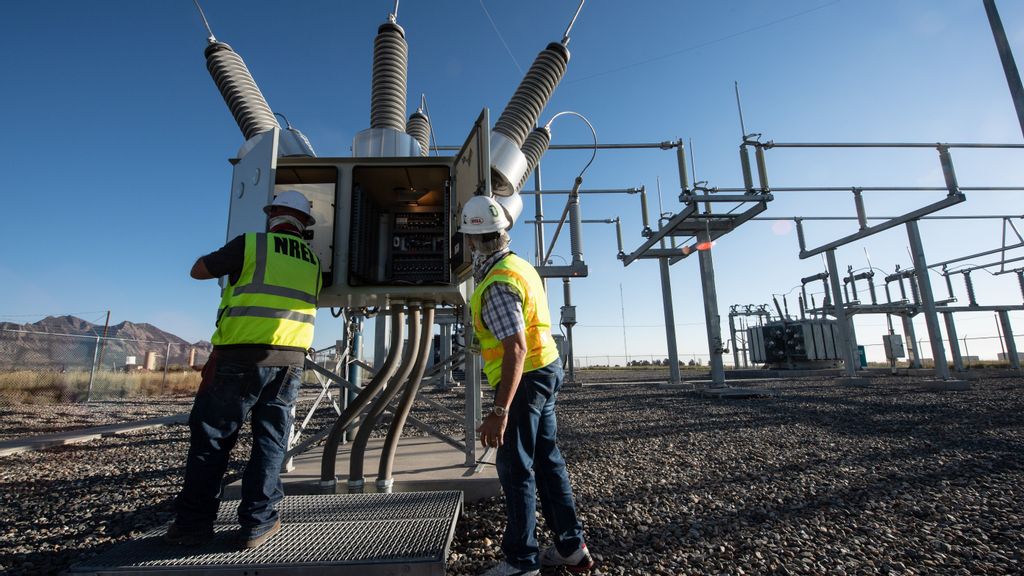 At the U.S. National Renewable Energy Laboratory’s Flatirons Campus in Arvada, Colo., researchers work to develop a state-of-the-art electrical transmission grid. The U.S. Senate approved $73 billion for upgrades to the nation’s electrical grid as part of the $1.2 trillion infrastructure package it approved on Tuesday, Aug. 10. (U.S. Department of Energy photo.)

WASHINGTON — Congress is set to power up renewable energy after the Senate made a big investment into the nation’s electric grid as part of a comprehensive bipartisan infrastructure bill passed on Tuesday.

From hydrogen pipelines and electric vehicle charging stations to green school buses, the sprawling $1.2 trillion infrastructure package approved in a 69-30 vote features a list of energy projects of all types. But it’s the upgrades to the grid that drew the biggest cheers from renewable energy advocates, who have said lack of capacity is slowing down deployment of wind, solar, high-capacity batteries and other green energy staples.

“This important legislation will provide immediate benefits to our nation’s energy infrastructure,” said Heather Zichal, CEO of the American Clean Power Association. “The bipartisan nature of this deal is a once-in-a-generation opportunity to invest in the future of our country and a clean energy revolution.”

With $550 billion in new spending outlays, the bill aims to make a $73 billion investment to modernize the electrical transmission infrastructure, enabling more power generation to plug into the grid, a White House fact sheet said.

The upgrade is something that the renewable energy industry has been eyeing since the outset of the administration of President Joseph R. Biden, Jr.

The  American Clean Power Association, which represents wind, energy storage and several other elements of the U.S. renewable energy sector, in January released a comprehensive plan on how renewable energy can power more than 50 percent of the U.S. electrical grid by 2030. A primary conclusion: upgrades to the nation’s electrical grid are crucial.

The Energy Department-funded Lawrence Berkeley National Laboratory found that 775 gigawatts of electrical generation capacity — 680 gigawatts from zero-carbon sources — is ready, but unable, to be interconnected to the grid. There is also 200 gigawatts of utility-scale battery power ready for interconnection. For perspective, renewable energy accounted for nearly 800 gigawatts of U.S. production in 2020, according to the U.S. Energy Information Administration.

Biden’s administration pointed to the costs associated with a substandard electrical grid. In a fact sheet outlining the bipartisan infrastructure agreement, the administration cited a Department of Energy study that found power outages cost the U.S. economy up to $70 billion annually.

One Republican advocate, Senator Bill Cassidy, M.D., of Louisiana, touted the carbon capture and storage technology that the bill funds. A technology designed to remove carbon emissions from coal and gas power generation and store it underground, it holds promise for extending the life of coal in the fuel system.

Republican Senators from coal-rich West Virginia and North Dakota also crossed the aisle to vote for the bill., while Cassidy touted how Louisiana will likely be the site of several of these projects.

Likewise, the American Petroleum Institute said it was “encouraged” by the Senate’s inclusion of carbon capture and storage, as well as hydrogen technology, into the bill.

However, not all Republicans were on board, with some raising concerns about both the spending in the bill and additional powers granted to the federal government.

The top Republican on the Senate Committee on Energy and Natural Resources warned that the bill “paves the way for the Biden administration to take over America’s electric system.” During a hearing on the energy portions of the infrastructure bill, Sen. John Barrasso of Wyoming said that bill empowers the federal government to override state decisions on permitting high-voltage electric transmission lines.

“We need to remove the barriers to transmission siting and make sure that permitting timelines are kept and that resources are in place,” said Amy Ferrell, senior vice president of government and public affairs at the American Clean Power Association, in a February interview with Zenger News. “The government has to keep the process moving.”

Beyond renewables, the bill offers funding for a series of projects that could help boost up-and-coming energy projects.

There’s $7.5 billion to build out electric vehicle charging stations. There’s $3.2 billion for an advanced nuclear reactor demonstration project. Carbon capture and storage technology gets $5.1 billion to advance its development, along with another $8 billion for hydrogen hubs.

It offers some flexibility by providing funding for both zero-emissions and low emissions fuels. For example, the bill sets aside $5 billion for “clean” energy school buses, with half for zero-emissions buses and the other half for buses that are able to operate off lower-emission alternative fuels like hydrogen or biofuels, the White House said.

Several of the bill’s provisions set up projects designed to test and develop the up-and-coming energy technology. There are several “demonstration projects” in the bill, which Sen. Cassidy said would focus on “key energy technologies including advanced nuclear reactors, carbon capture, critical minerals, energy storage, and industrial emissions infrastructure.”

“Technology demonstrations reduce the time to market for more efficient, cleaner technologies, which can give US companies a competitive advantage in the global marketplace,” the group said in a 2020 report.

Along with the demonstration projects, the bill also calls for a “hub” system for several projects, which the Energy Futures Initiative described in its Building to Net-Zero report as using geographic clustering of infrastructure and resources to boost economies of scale. The group, a coalition between the energy industry and labor unions that supports carbon capture development, said in its report that the hub model had already been successfully used in other countries to encourage private sector engagement in carbon capture projects.

With passage of a Senate package, attention now turns to the House of Representatives, which is expected to consider the bill when it returns in September. Some renewable energy advocates said they will be pressing House leadership to add more friendly provisions to the infrastructure package.

Mere minutes after the vote was cast in the Senate, Oregon Democratic Rep. Earl Blumenauer, and more than 180 of his House Democratic colleagues, sent a letter to House leadership encouraging the addition of tax credits to the legislation that would benefit the solar industry.

“The clean energy champions on this letter understand the stakes, and we echo their call to support policies that have a track record of driving clean energy deployment,” said Erin Duncan, Solar Energy Industries Association vice president of congressional affairs, in a statement.