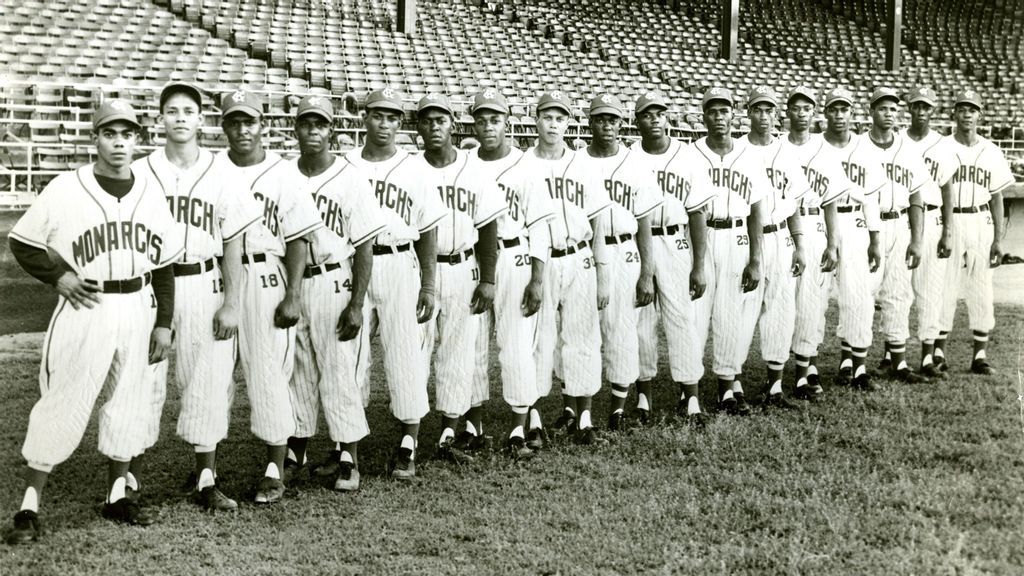 The 1954 Kansas City Monarchs. The team was one of the Negro Leagues' most famous and successful clubs. (Courtesy Negro Leagues Baseball Museum Inc.)

Bob Kendrick sees the Negro Leagues Baseball Museum as a haven of social justice. Kendrick, the museum’s president, doesn’t want the accomplishments of baseball’s segregated pastime to be remembered just for the struggles that period entailed.

Instead, he hopes that it becomes a temple to overcoming the adversity of the times and not a place that merely chronicles the era of racism during which black baseball players were denied access to equal opportunities to compete on the same playing field.

“At its crux [NLBM] is a civil rights and social justice museum; it’s just seen through the lens of baseball,” said Kendrick. “It’s a story of triumph over adversity, and it’s important for people to see more than just the downtrodden part of our journey in this country.”

Major League Baseball and the NLBM have launched the Negro Leagues 101 initiative, which is an interactive, social media platform that is designed to create greater awareness of black baseball through 101 trinkets of knowledge for baseball and fans of black history. Since June 25 and through Oct. 3 — which is the final day of Major League Baseball’s regular season — a past or current player or member of the baseball community pays homage to the Negro Leagues through special digital programming designed to enlighten, educate and elicit interest in a legacy that is more than what transpired on the diamond.

The initiative also consists of a series of programs, lectures and events, including virtual learning experiences that feature an online tour of the museum itself. The MLB Network continues to air vignettes from a new conversation between Kendrick and former major-league player-turned baseball analyst Harold Reynolds, which was shot at the Negro Leagues Baseball Museum.

Their conversation featured a discussion about Jackie Robinson’s time with the Kansas City Monarchs before he integrated the Brooklyn Dodgers. Kendrick and Reynolds also talk about Negro Leagues legends Satchel Paige and Oscar Charleston.

“There’s nothing sad or somber about the history of the Negro Leagues,” Kendrick said.  “The circumstances that dictated the need for Negro Leagues were unfortunate but not the story of the leagues themselves. It is one of the most compelling and inspirational stories in the annals of American history.”

The 100th anniversary celebration of Negro League Baseball was scheduled for 2020, but it had to be postponed due to the COVID-19 pandemic. However, the museum was anything but dormant. NLBM officials saw a spike in social justice awareness during the climate of civil unrest around the country, with interest in the history of black baseball peaking as well.

They now hope to capitalize on that momentum as a driving force to create a thirst for more knowledge among a younger base to preserve memories that had been traditionally passed down through an older generation of baseball fans.

“Hopefully it will spark interest,” said NLBM curator Raymond Doswell. “You’re not going to get biographies and full documentaries through social media, but the idea is that you’re introducing name dates and facts for people and get them interested and look for more information on their own.”

In a major boost to the legacy of Negro League Baseball, records of several leagues have been officially added to the history of the game’s statistics, which vindicated many great players who were denied the opportunity to play in the major leagues against white legends of the game.

Baseballreference.com — the statistical authority on the game’s records — has expanded its database with the Negro Leagues’ black major-league players from 1920-1948. Those statistics are now officially listed with all of Major League Baseball’s records. That means the records of players such as Paige and Josh Gibson can now be legitimately compared to those of their white counterparts such as Babe Ruth and Walter Johnson.

The process of adding Negro League statistics is ongoing, and the 28 years of statistics that have been incorporated into the database are not complete. However, these additions give credibility to those who are looking to have Gibson’s name added to either the National or American League Most Valuable Player Award that will be rechristened to remove the name of one-time commissioner Kenesaw Mountain Landis, who historically separated the game’s records by refusing to integrate the game.

“The Negro Leagues are not less than the National and American Leagues,” reads a statement on the Baseball Reference website. “They are different, and we recognize that our work must acknowledge those differences.”

This group of Negro League clubs doesn’t include the barnstorming teams that were ambassadors during their travels to play against Caribbean counterparts. They also don’t include other independent teams many historians consider to be as good as the teams that have been classified as major-league Negro teams on baseball-reference.com. The complete register of baseball history contains a significant record of Independent and non-major Negro Leagues, including a page for the 1917 Chicago American Giants.

“It is a major step forward bringing Negro League players into the more broad conversation about their talents and abilities and what they had to overcome in comparison to their white contemporaries who played in Major League Baseball,” said Doswell. “You had to go through so much outside the game just to play the game. If this is your introduction to the African-American struggle in America through baseball, then welcome to the conversation.”

The research is ongoing, and there is no timetable for when it will be complete. Record keeping was fractured because of what Baseball Reference acknowledges was systemic racism and the lack of media accounts and record keeping.

«Previous Post
You Made History Without Blueprint: Olympics Committee President Thanks Organizers»Next Post
International Cricket Council To Push For Cricket’s Inclusion In Olympics