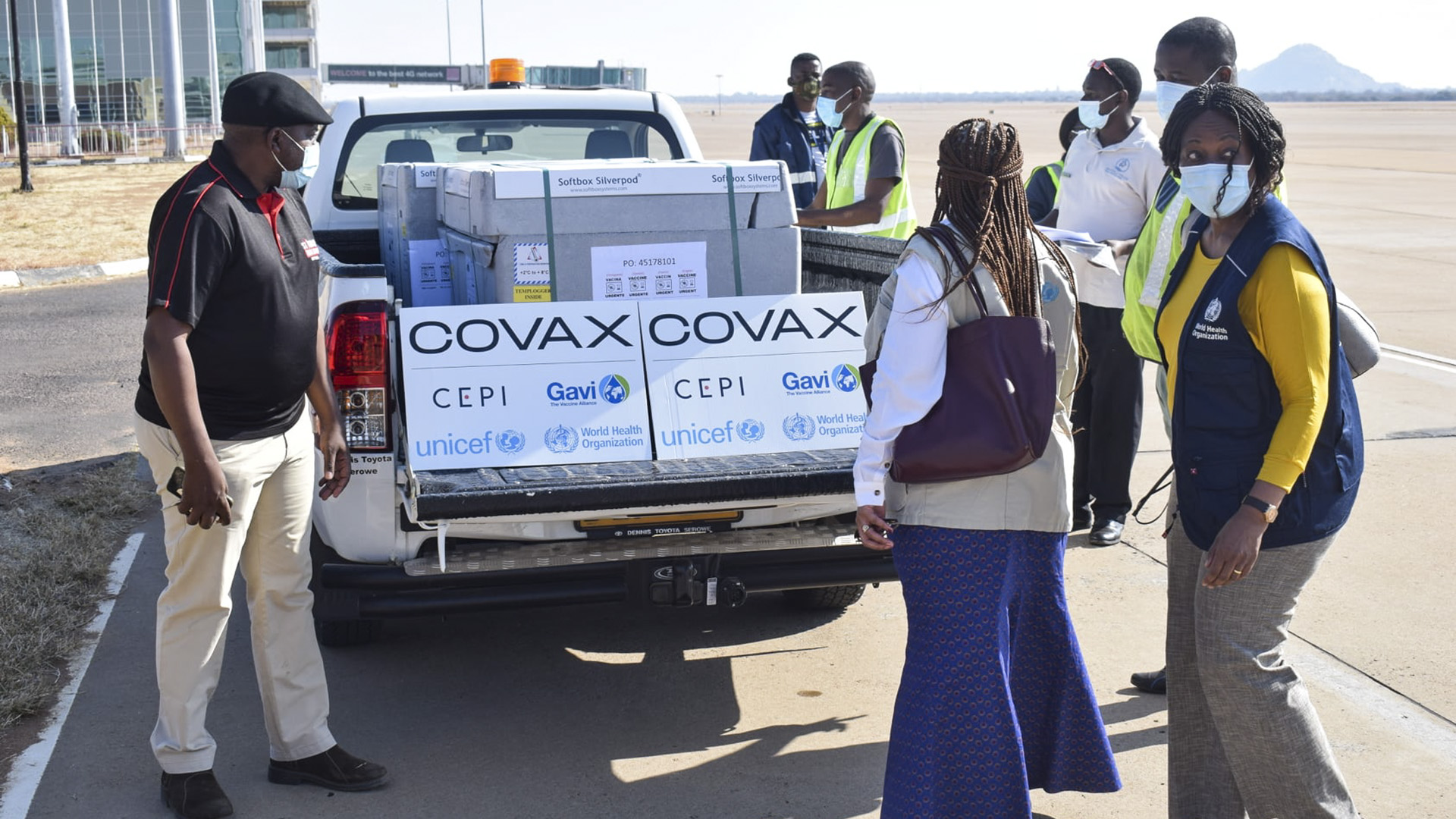 Around 38,400 doses of AstraZeneca vaccines for Botswana arrive at the Sir Seretse Khama International Airport on Aug. 8. (Ministry of Health and Wellness, Republic of Botswana)

“The Covax facility, which poor African countries were made to believe would help them once they contribute money to it, was merely meant to deceive us,” Masisi said when visiting health facilities in the capital, Gaberone, on July 22, 2021.

“This was just a scam. Only a few vaccines were given to us. As you are aware, lately we had a shortage of AstraZeneca. This is a hoax we are talking about”.

Botswana has contributed more than $10.3 million to the pooled procurement facilities of Covax and the African Vaccine Acquisition Task Team by February 2021, according to the Minister of Health and Wellness, Edwin Dikoloti.

“I also wish to acknowledge that contrary to our expectations of timely delivery of the vaccines, this has not come to pass despite the payments. This delay is due to high global demands for the vaccines which far outstrip supply.”

Botswana is experiencing a shortage of the second dose of the Oxford-AstraZeneca vaccine, forcing authorities to source for Moderna and Pfizer vaccines.

In an emailed response to Zenger News about Masisi’s accusation, Gavi, which administers Covax, said the facility faces global supply challenges. It singled out the second wave of the pandemic in India, which caused delays in deliveries from the Serum Institute of India.

“Despite this, through the combined efforts of Covax, Africa CDC, AVATT, and the African Union, Covax is on course to deliver 520 million doses to the African continent by the end of the year and remains committed to enhancing equitable access to vaccines, contributing to the AU target of vaccinating at least 60 percent of the African population,” said Gavi. 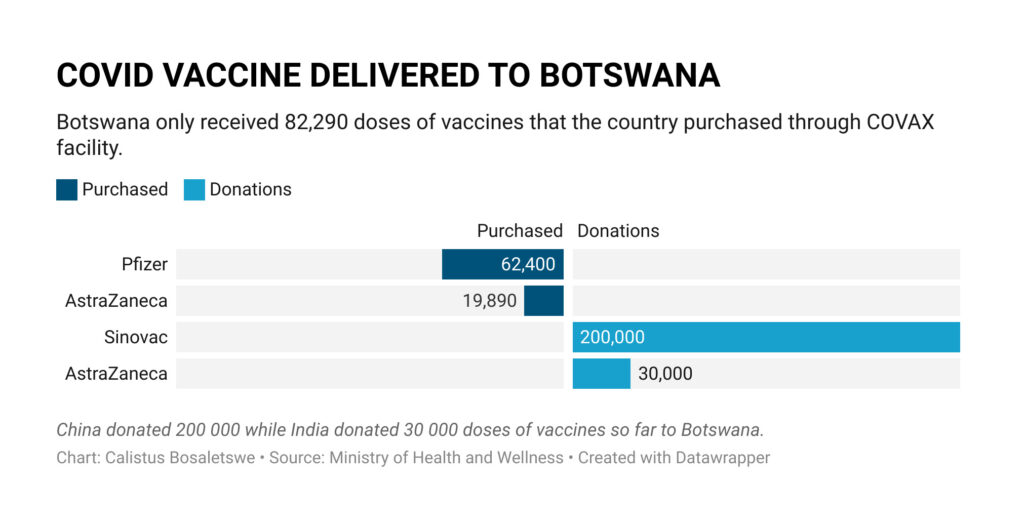 “To facilitate this goal, we need countries and manufacturers to prioritize supply to Covax to ensure life-saving vaccines reach the people that need them the most.”

“We only struck a deal to purchase vaccines in April 2021,” Mohwasa told Zenger News.

“There wouldn’t be so many deaths if our government put in place necessary equipment and vaccines. It is a question of poor planning and failure to have priorities right. We didn’t place orders for vaccines on time. He [Masisi] should know that we are talking life and death.”

The Ministry of Health and Wellness told Zenger News that the government procured 940,800 doses through Covax, while the rest were procured in April directly from manufacturers.

“What has led to the delay in vaccine arrivals is the high global demand for vaccines which has now outstripped supply,” Christopher Nyanga, the ministry’s spokesperson, told Zenger News.

Nyanga said that Botswana had not received 1,152,654 doses of Johnson &Johnson vaccines procured in April 2021 through the African Vaccine Acquisition Task Team.

“So far, $11,525,640 has been paid to AVATT as part payment for the 1,152,654 Johnson & Johnson doses procured through this facility. We expect the first consignment to arrive between August and September 2021,” Nyanga said.

The ministry denied recent media reports that it had agreed to purchase 500,000 doses from American manufacturer Moderna.

“The ministry wishes to state for a fact that its agreement with Moderna for the supply of 500,000 doses still stands,” said Nyanga in a press release on July 30.

“The two have a legally binding agreement that remains in force. The ministry further states that it has not reneged on making any payments to the company. Instead, the ministry has paid a total of $4,332,000 as part payment for the 500,000 doses procured.”

Nyanga said the country expected the first consignment of the Moderna vaccines in August and September 2021. 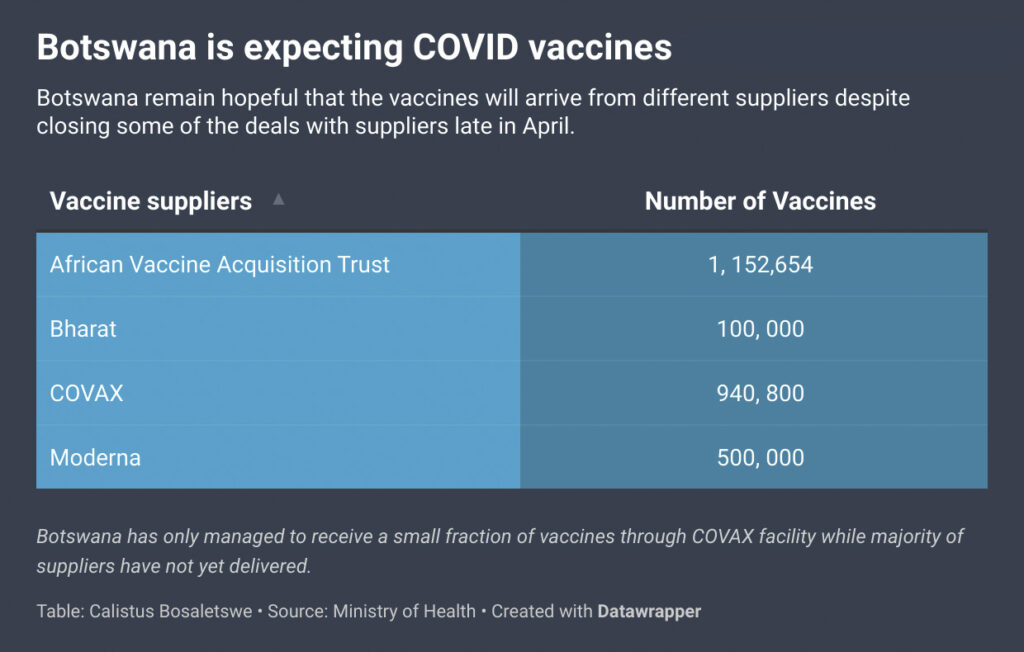 He said that Botswana is also expecting 100,000 doses of the Covaxin vaccine in October 2021. The government procured the doses through bilateral negotiations with Bharat in India.

Nyanga said that Botswana also received 30,000 AstraZeneca shots from the Republic of India and 200,000 doses of the Sinovac vaccine from the People’s Republic of China.

Botswana should have prioritized building the capacity of the public health system to handle the pandemic, said Lesedinyana Odiseng, the director of Moso Clinics in Gaberone.

“The government should have done so last year,” he told Zenger News.

“The second priority should have been preparing infrastructure for mass vaccination. The government should have paid for the vaccines as soon as they were available. I do not know how Botswana paid for vaccines, but I found the initial policy of relying on donations irresponsible.”