What’s Up With This Hiss-tern? Snake Trapped In Toilet Kept Flushing It 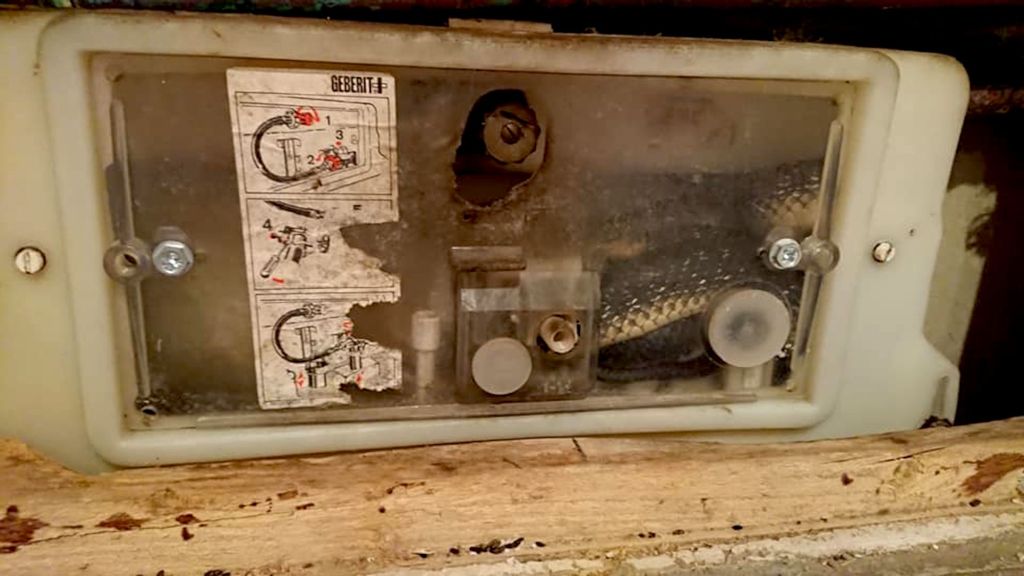 A snake was found inside the toilet tank in a man's house Vienna, Austria. (Breitenfurt Fire Brigade/Zenger)

A man wondering why his toilet seemed to be flushing by itself was shocked to discover a 6&half;-foot long Aesculapian snake hiding in the cistern.

The discovery on Aug. 7 is the latest in a number of bizarre incidents involving snakes found in Austrian toilets.

This one occurred in the town of Breitenfurt, located near Vienna, Austria’s capital. A homeowner became terrified when his toilet started flushing on its own.

After he opened the toilet tank to investigate, he discovered the snake, which had made itself comfortable inside.

The panicked man immediately alerted local firefighters from the District of Modling located in Lower Austria.

Shortly after 10 p.m., firefighters came and found the reptile curled up inside the toilet tank, and reassured the man.  Although a frightening experience, he was told he was never in any danger, as it was nonvenomous.

Modling District Fire Brigade spokesperson Lukas Derkits explained the Aesculapian snake, which is native to Europe, grows up to two meters (6.6 feet) in length and is one of the largest snakes on the Continent.

The snake, which was taken out of its unusual hiding place and released back in the forest, came inside the toilet tank through partition walls, according to Derkits.

Snakes have recently dominated headlines in Austrian media, since a 65-year-old man from Graz was bitten on his genitals by an albino python during a morning bathroom trip on July 5.

The man was taken to the city’s University Hospital, treated for minor injuries and later released.

However, in a second incident that happened during that same week, a 24-year-old man died at the hospital after he was bitten by a nose-horned viper he kept in his home in the Austrian city of Enns on July 7.

Then, on July 9, police received a call from an apartment in Vienna after resident Eva Kastner spotted a 3-foot-long python slithering on her toilet seat. The snake was eventually transferred to the Forchtenstein Reptiles Zoo in the town of the same name.

It is legal for people to keep snakes, even venomous ones, in Austria, but they have to have licenses, which means they need to register the animal.

They also need to be responsible for making sure the creatures are kept in appropriate conditions. Owners can be liable for sanctions if the snakes escape and cause any damage or injury to anybody else.