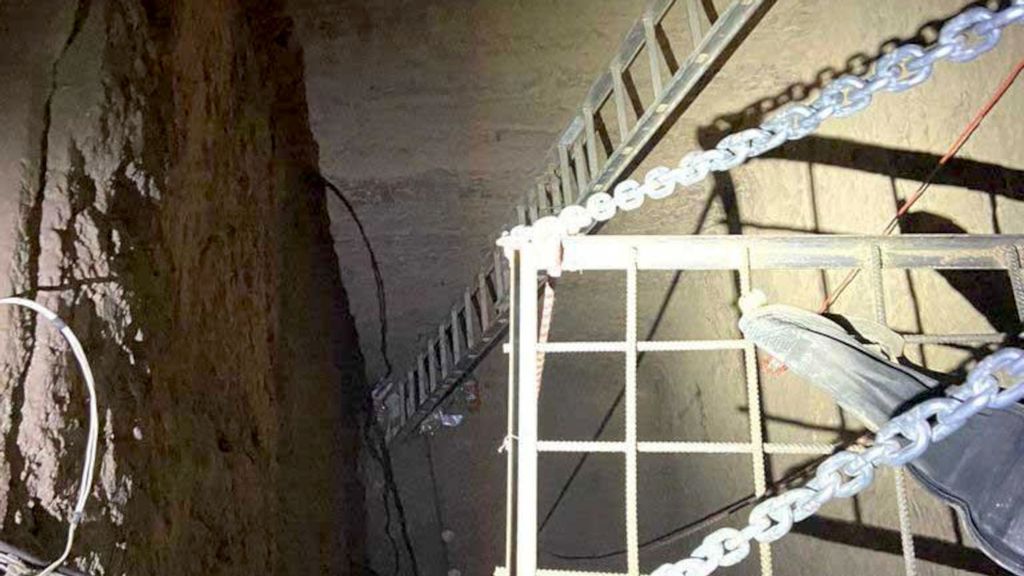 The latest criminal plot to be derailed at the U.S.-Mexico border was this tunnel, dug to move drugs into the United States. Authorities from both countries announced its existence, saying it had its own railroad tracks to move cargo northward. (U.S. Immigration and Customs Enforcement/Zenger)

American and Mexican authorities have discovered what U.S. Immigration and Customs Enforcement calls an “enormous” tunnel in a town near the U.S.-Mexico border, used by drug traffickers to hide their activities. The tunnel is outfitted with an electric hoist, ventilation and railroad tracks.

The tunnel extended three feet into the United States when it was detected, but the traffickers had not yet dug an exit on the American side.

ICE said the 183-foot-long dig in the city of Mexicali in the Mexican state of Baja California is close to Calexico, California. It is 22 feet underground and carves a path about 4 feet high and 3 feet wide, according to the agency.

“Discovering and shutting down these tunnels deals a major blow to drug trafficking organizations because it denies them the ability to smuggle drugs, weapons and people across the border,” Morant said.

The U.S. government has not said whether any suspects have been arrested in connection with the tunnel or drug-related crimes. The agency did not respond to a request for comment.

Other drug-related enforcement actions in the region include the July 27 sentencing of Luz Irene Fajardo Campos, a Mexican national aligned with the Sinaloa Cartel, according to the Department of Justice. She was sentenced in the U.S. District Court for the District of Columbia to 22 years in prison for her role in an international drug-trafficking conspiracy.

“With this sentencing, we cut the head off of the snake,” said Cheri Oz, special agent in charge of the Drug Enforcement Administration’s Phoenix Field Division.

The U.S. Border Patrol in January 2020 also exposed the longest illicit cross-border tunnel ever discovered along the southwest border.

In discovering the latest tunnel, Homeland Security Investigations thanked the Mexican government for its cooperation in the ongoing investigation. It also asked the public to anonymously report any tunnels to a Tunnel Task Force.

Homeland Security Investigations’ workforce includes more than 7,100 special agents assigned to 220 cities throughout the United States, and to 80 overseas locations in 53 foreign countries.