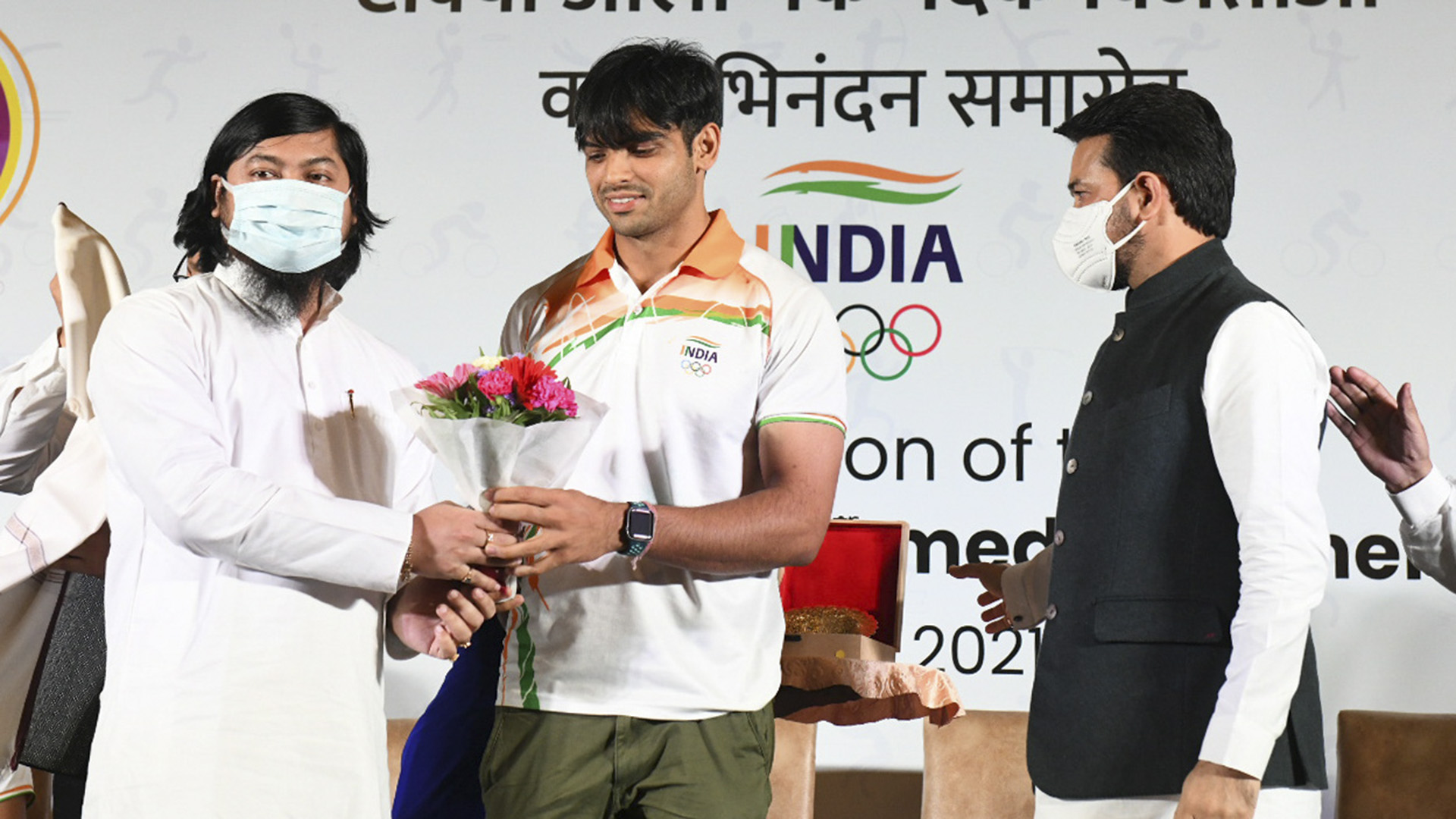 Neeraj Chopra, Ravi Kumar Dahiya, Mirabai Chanu, P.V. Sindhu, Bajrang Punia, Lovlina Borgohain, and the men’s national hockey team were the ones who won the medals for India in the recently concluded Olympics.

The occasion was also witnessed by Indian ministers, namely Minister of Law and Justice Kiren Rijiju; Minister of State for Youth Affairs and Sports Nisith Pramanik; Secretary of Sports Ravi Mittal, and Director-General of Sports Authority of India Sandip Pradhan.

Gold medalist Chopra, silver medalist Dahiya, bronze medalists Punia, Borgohain, and hockey team captain Manpreet Singh Sandhu returned to India after the closing ceremony of Tokyo 2020 on Aug. 8. They were joined by the other medalists, Chanu and Sindhu, during the grand felicitation.

“Tokyo 2020 was an Olympic game of many firsts for India,” said Thakur.

“The success of Team India at the Olympics is a reflection of how New India desires and aspires to dominate the world, even in sports. The Olympic Games showed us that with self-discipline and dedication, we could be champions.”

“Team India excelled and inspired while Indians cheered and celebrated all around. Truly sports is a great unifier as our athletes come from villages and cities, north to south, from east to west. Their journey is an incredible story of resilience and sporting excellence,” he said.

The Sports Minister further said that there were many firsts, a 128-member Indian contingent, 7 Olympic medals, first Olympic gold medal in an Athletics event, two successive medals in consecutive Olympic Games by P.V. Sindhu, a medal (bronze) won by the Indian men’s team in hockey after a gap of 41 years and a historic entry to the semi-finals by the Women’s hockey team.

“We also had the first female sailor from India to qualify for the Olympics — Nethra Kumanan, first Indian fencer from India to make it to the Olympics — Bhavani Devi, the best place achieved by an Indian in Equestrian eventing — Fouaad Mirza, the best-ever finish for Indian Rowers, the highest-placed finish by an Indian in golf by Aditi and a national record was set in the steeplechase by Avinash Sable,” said Thakur.

Rijiju praised the performances of all the athletes and reiterated that India would be a force to reckon with by the 2028 Olympics.

“I am thrilled beyond words to share this space with our champion athletes today,” said Rijuju.

“This is a historical event, with India registering its best-ever performance in the Olympics. We have much to be proud of; we have a hockey medal after 41 years and a first-ever gold in athletics.”

“It is not just our medal winners, each athlete has put their best in Tokyo, and I congratulate all of them. This is just the beginning because India’s resurgence in sport is visible now, and I am confident that by the 2028 Olympics, India will be a force to reckon with.”