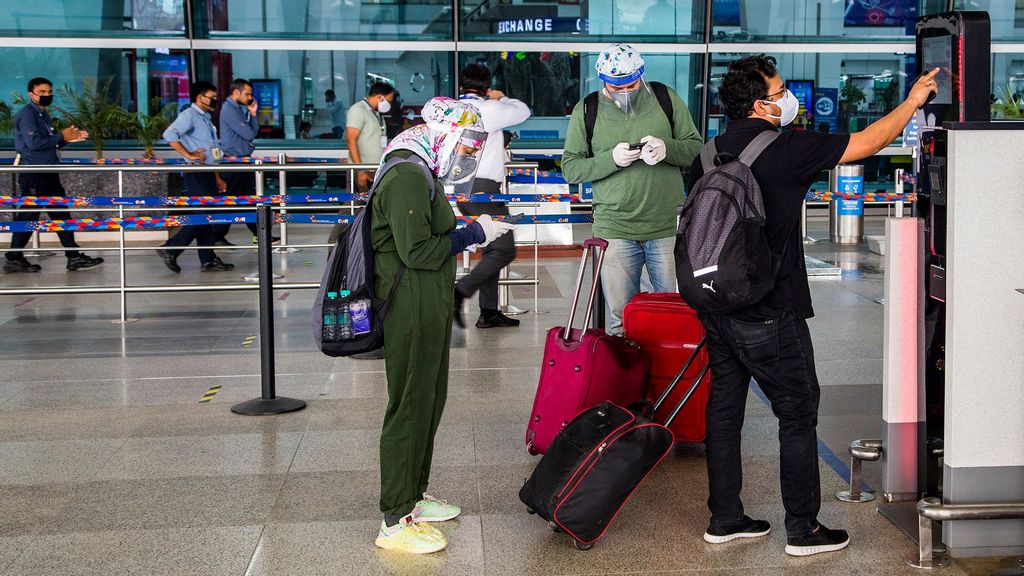 Indian travelers wait at the drop-off point before entering Terminal 3 of the Indira Gandhi International Airport, as the country relaxed its lockdown restriction in Delhi, India. (Yawar Nazir/Getty Images)

NEW DELHI — The Indian parliamentary standing committee for transport, tourism, and culture (including the civil aviation ministry) is expected to take up the increasing fare cost between India and the United Kingdom.

Rapid Covid-19 testing cost at the Indira Gandhi International Airport in capital Delhi is also on the agenda of the discussion.

The committee will summon a representative from the civil aviation ministry in an upcoming meeting in connection with India-UK one-way airfares skyrocketing upwards of INR 4 lakh ($5,376.16) and the INR 5,000 ($67.20) steeply-priced RT-PCR (rapid polymerase chain reaction test) for United Arab Emirates passengers.

T.G. Venkatesh, chairman of the Parliamentary Standing Committee for travel, tourism, culture, including civil aviation, had raised concerns over the unregulated airfares.

“The committee has taken serious note of the issues of skyrocketing fares for London and RT-PCR test cost of INR 5,000 ($67.20) for United Arab Emirates travelers,” said Venkatesh.

“We do not have control over international flights and their tariffs. The committee will urge the civil aviation ministry to improve Air India’s services globally and discuss RT-PCR testing price for United Arab Emirates travelers at the Delhi airport.”

The parliamentary panel will take up the above issues and discuss them in the next meeting, slated to be held on Aug. 16.

The committee had received several complaints regarding the Covid-19 test pricing and airfare.

“Passengers have been complaining about Covid-19-related testing and pricing at the airport in the past as well, and the committee has also received several complaints,” said Venkatesh.

“The inflated fares come at a time when colleges in the UK are beginning admissions,” said Sanjeev Gupta, a senior 1985 batch Indian Administrative Service officer.

“Parents and guardians of those who have been admitted to UK educational institutes have also expressed their dismay and frustration at the exorbitant flight fares.”

The Indian Administrative Service officer had recently shared on Twitter multiple screenshots of several airlines which mentioned “price for one way Delhi to London flight of British Airways of INR 3,95,306 ($5,314.11) and Air India showing of INR 2,32,053 ($3,119.49) for one way for economy class.”

“True fare on Air India website may be INR 1.15 lakh [$1,545.84], but travel portals still sometimes show business fare as economy [class] as per screenshot for Air India. That issue needs to be resolved,” Gupta tweeted.

Genestrings Diagnostic Center, a private firm, recently installed an RT-PCR testing facility for United Arab Emirates travelers at Delhi’s Indira Gandhi International Airport. The tests cost INR 5,000 ($67.20) and are mandatory for those traveling to the United Arab Emirates as per the guidelines by the Gulf country.