Marcus Washington never made it to the NFL and had to find a new path to success, which he shares with students in his new book.
By Percy Lovell Crawford August 10, 2021
Facebook
Twitter
Linkedin
Email 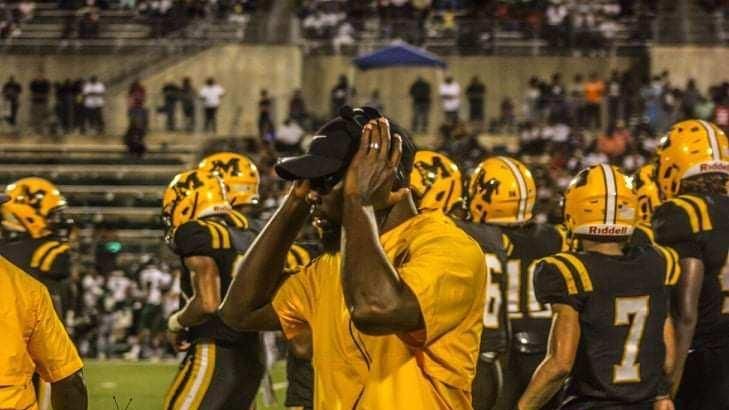 When Marcus Washington’s football career ended at Mississippi State University in 2009 his new life was just getting started. Washington became a father when he was a college freshman, so he learned how to prioritize things as a young parent/student-athlete.

However, he struggled to figure out what to do with his life after football once the NFL didn’t come calling.

He eventually figured it out: He is assistant coach at his alma mater, Fort Bend Marshall High School in Missouri City, Texas; he founded Motiv8 U, where he works as a student success coach; and he recently released his first e-book, “Success Is My Only Option: The Official Handbook for the Modern Student.”

Now that he’s found his purpose, he plans to share his path with as many student-athletes as possible.

Zenger spoke with Washington about his new book, the importance of student-athletes transitioning into adulthood, and much more.

Zenger: What are you into these days?

Washington: I’m going into my eighth year of education, teaching and coaching.

Zenger: You played all four years of college ball at Mississippi State University. What was that experience like, and how did it help mold the man you became and what you are doing now?

Washington: That was a phenomenal experience for me. I’d never been to Mississippi before. They were actually the first ones to offer me a scholarship. Truth be told, I had never even heard of Mississippi State.

Zenger: Wow. Starkville [where MSU is located] is out there in no man’s land.

Washington: I found that out fairly quickly, too. I was at a leadership camp in high school. I didn’t have access to a cellphone, TV or nothing. And my dad called me, and he was like, “Mississippi State wants to offer you a full scholarship.” I thought he was talking about Ole Miss. He was like, “Nah, Mississippi State.” And I said, “Tell them I’m there.” I didn’t go on a visit, I hadn’t heard anything about the school, but they were the first ones that believed that I could play on the next level and wanted me, so I committed.

It was a blessing. I loved my time in Mississippi. It was eight-and-a-half hours from home and that forced me to grow up. Starkville made me who I was because there was so much going on in that time. I actually graduated in three-and-a-half years as a parent/student-athlete. … It may me grow up fairly quickly, and just really buckle down and focus, and have a sense of urgency. I was not out there to play. I had a real-life responsibility.

Zenger: So, you decided that your book should share those experiences and your knowledge with student-athletes who are in the position you were once in?

Washington: Absolutely. … To have a sense of urgency to transition. That’s what it’s all about. Everything I do is about helping students successfully transition into adulthood. Being a high school educator, teaching juniors and seniors and seeing so many kids that I had graduate and not get to where they wanted to go. That is real disheartening for me. I just felt a sense of urgency and I had to try and do something. That’s when I created my organization, “Motiv8 U.” I started giving students structure, a system, strategies to successfully transition into adulthood.

Zenger: If you had to pinpoint one issue that stunts the growth of some of your students or former students, what would that be?

Washington: I would say a lack of overall focus and direction. They just don’t know where they’re going. That’s one of the critical questions I ask them, “Where are you going?” I just found that once they focused on whatever they want to transition to and helped them put a detailed game plan in place, their behavior drastically changed.

I tell these kids, it doesn’t matter what you want to do. Once you identify that target, the steps to success are similar, no matter the profession you want to go into. You gotta be consistent, you gotta make some adjustments and make some sacrifices.

Zenger: What was the process like for writing your book, and what made now the time to release it?

Washington: It was a little bit more tedious than I thought it would be. But for me, I put my story in the book, so it was therapeutic to go back and pull out the lessons from my story. I enjoyed it. I hoped to share my experiences to impact other people. I’m a football coach, so just me sharing stories with my players, and seeing how they responded, I figured it was time to tell the whole story and see if anybody can gain any value from it.

Zenger: How much of a game changer — positive or negative — will it be now that players can earn income from their NIL (Name Image Likeness)?

Washington: I think it’s a step in the right direction. It’s been a long time coming. It’s important for student-athletes to pay attention to the process and don’t let that overshadow the reason that they are there in the first place. Some “black eyes” will come along with it. In a couple of years, I’m sure we will hear some student-athletes who have been cheated or wronged.

Hopefully, they can put structure in place to make sure they are going in the right direction. Overall, it’s a good thing. You’re getting the bag and making that money, but there are some other things that go along with that. It’s very necessary. Student-athletes are broke, man.

Zenger: The NFL doesn’t open the door for every athlete that played college football. Your book is a guide to show those athletes that there is life after football, correct?

Washington: That is so critical. I talk to my former teammates from Mississippi State, and to be honest with you, we didn’t initially successfully transition after football.  It was like, “Alright, we didn’t make it to the league, now what do we do?” It’s sad and pitiful when I look back on it. There’s a way for you to prepare yourself to make it to the league, but you can also have other options.

Even if you go to the NFL, the ball is eventually going to stop. Take that time, play ball, but figure out what career you want as well. Just because you’re focusing on a career that doesn’t mean you’re not dedicated to football. There are too many times when athletes feel like they gotta pick either one. You have to answer these questions: Who are you, what are your strengths, what are your weaknesses, what is your gift? And once you figure that out, you figure out what career that aligns with.

Zenger: What do you hope anyone who reads your book take away from it?

Washington: Success is the only option with anything that you want to do. There are levels to success, and you have to be strategic and intentional. Certain principles that I used I feel are universal and apply to any student. Any student or parent that picks up the book, just understand to be intentional and strategic with anything that you want to do. Put a target in place, make a game plan and from there you just gotta go to work. I think my book applies to anyone that picks it up. Whether you are 10 years old or 50, you can gain value from it, because it has universal success principles. I just choose to gear it toward students.

Zenger: But because everyone’s definition of success is different, you shouldn’t compare someone else’s level of success to your goal of success.

Washington: It’s funny you said that. I had that conversation with a student that I’m working with. He’s at the University of Houston, and we had the same talk about how to define success. For me, I studied success, and success is the ability to learn how to accomplish a goal. If you can learn how to do that, the sky is the limit. I set a five-year goal, and now I know what I have to do in order to get it done. From there, the world is at your fingertips.