Los Changuitos Feos performed at the presidential inaugurations of Nixon and Ford. It kick-started the genre’s success in the U.S. 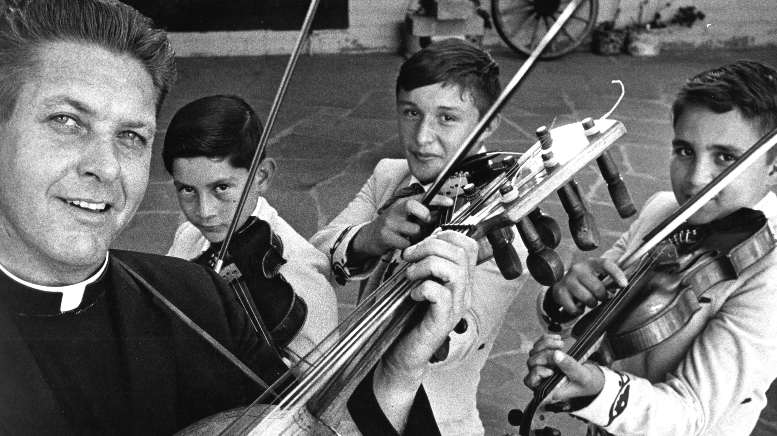 A documentary about “Los Changuitos Feos” will reveal the dark secret that almost destroyed the lives of its members. (LatinHeat Entertainment)

A youth mariachi group started a movement credited with taking the Mexican music genre to a new level of popularity in the United States in the 1960s.

Its legacy is still alive.

A crowdfunding campaign is raising money for a documentary film about Los Changuitos Feos de Tucson. Five decades in the making, “Ugly Little Monkeys” is based on the book “Bless Me Father for You Have Sinned,” written by original musical group member Wilfred Arvizu.

Self-published in 2014 on the group’s 50th anniversary, the book details the sexual abuse that Father Charles Rourke subjected the band members to for years before he was removed in 1969.

Los Changuitos Feos de Tucson is considered the first youth mariachi band in America. Father Rourke chose its name and, although controversial, it remains after more than 50 years.

The band achieved national recognition following performances at the presidential inaugurations of Richard Nixon and Gerald Ford. It eventually rose to international fame. But the traumatic secret of abuse by the alcoholic priest weighed heavily on the band members’ lives far into adulthood.

However, the mariachi members’ faith in each other and the band helped the young men overcome the pain they suffered at the hands of their spiritual and musical leader, say the doc’s filmmakers. Some went on to become successful musicians and community leaders.

Making the documentary is personal for Valdez. “We just knew we had to tell this story the only way we know,” he said. His father was among the founding board members of Los Changuitos Feos.

“What started as a biopic concept turned into a documentary after interviewing several original members of the group as part of our initial research for the film.”

The band earned international acclaim and its success promoted the world-renowned mariachi youth movement that still thrives today, according to Valdez.

Castillo says he understands how the youth mariachi became a trailblazer.

“After having met many of Los Changuitos Feos’ early members, it is easy to see how the group became so successful,” he said. “They’re dedicated individuals who inspire with their accomplishments, even after having left the group. It has also been a real pleasure seeing them be supportive of each other and watching them interacting joyously and cavorting as they did when they were young.”

The filmmakers hope to raise the final monies for the project, which is already 50 percent complete and features legendary singer Linda Ronstadt, a Tucson native. The goal is to raise $50,000 via the crowdfunding platform Seed & Spark.

“We have some great incentives for our supporters who donate at least $25 or more,” said Huerta, the co-writer who also serves as associate producer. “We need support to continue to tell these stories that educate, inspire and share our beautiful culture and musical legacy.”

Don Gutierrez says the mariachi’s story is close to her heart.

“This project is very important to me, especially because I was born and raised in Tucson, where Los Changuitos were our hometown heroes,” she said. “It’s time their story is told.”