Drone films endangered animal as she feasts at a drought-stricken area of the Caspian Sea.
By Feza Uzay August 9, 2021
Facebook
Twitter
Linkedin
Email 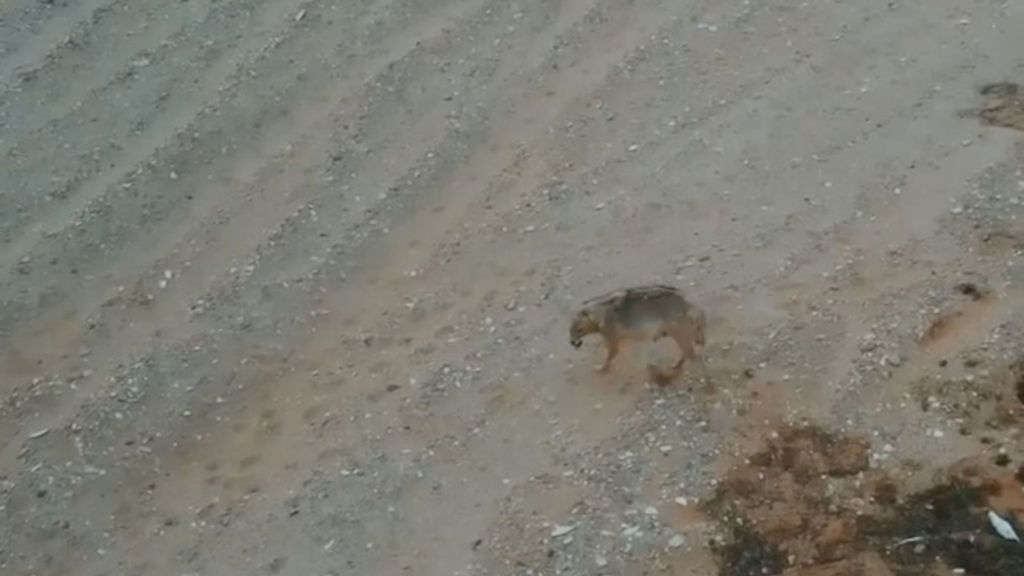 An endangered female red wolf is captured on video by a drone on the Caspian Sea coast in Mangistau, Kazahstan. (@billy_why/Zenger)

A critically endangered female red wolf was photographed eating fish on the shore in a dry basin in western Kazakhstan.

Videographer Meyrambek Aralbayuly filmed the rare female red wolf from a drone near the Caspian Sea in the Mangistau region of Kazakhstan. He posted the footage on his Instagram account on Aug. 6.

The red wolf “is a distinctly different species from the gray wolf,” according to the Endangered Wolf Center.

Under the United States’ Endangered Species Act of 1973, the red wolf is listed as an endangered species by the U.S. Fish and Wildlife Service.

The video shows the red wolf eating. After noticing the drone, she runs off.

Aralbayuly said the red wolves feed on fish that wash ashore due to drought. He also said red wolves attacked people in the village of Atas three years ago.

The Caspian Sea, the world’s largest inland body of water, “has been slowly evaporating for the past two decades due to rising temperatures associated with climate change,” according to a study cited in 2017 by the international nonprofit association Advancing Earth and Space Science (AGU).

“Increased evaporation over the Caspian Sea has been linked to increased surface air temperatures,” the AGU states. “According to the data from the study, the average yearly surface temperature over the Caspian Sea rose by about 1 degree Celsius (1.8 degrees Fahrenheit) between the two time frames studied, 1979-1995 and 1996-2015. These rising temperatures are likely a result of climate change, according to the study’s authors.”

“The red wolf is the world’s most endangered wolf,” the U.S. Fish and Wildlife Service states. “Once common throughout the Eastern and South Central United States, red wolf populations were decimated by the early 20th century as a result of intensive predator control programs and the degradation and alteration of the species’ habitat.”

The red wolf “is a native North American canid, intermediate in size between the coyote (Canis latrans) and gray wolf (Canis lupus). Red wolves are mostly brown and buff colored with some black along their backs, often with a reddish color on their ears, head and legs. Adult red wolves range in weight from about 45 to 80 pounds,” the Fish and Wildlife Service states.

“Red wolves have wide heads with broad muzzles, tall pointed ears and long, slender legs with large feet. Red wolves stand about 26 inches at their shoulder and are about 4 feet long from the tip of the nose to the tip of the tail.”