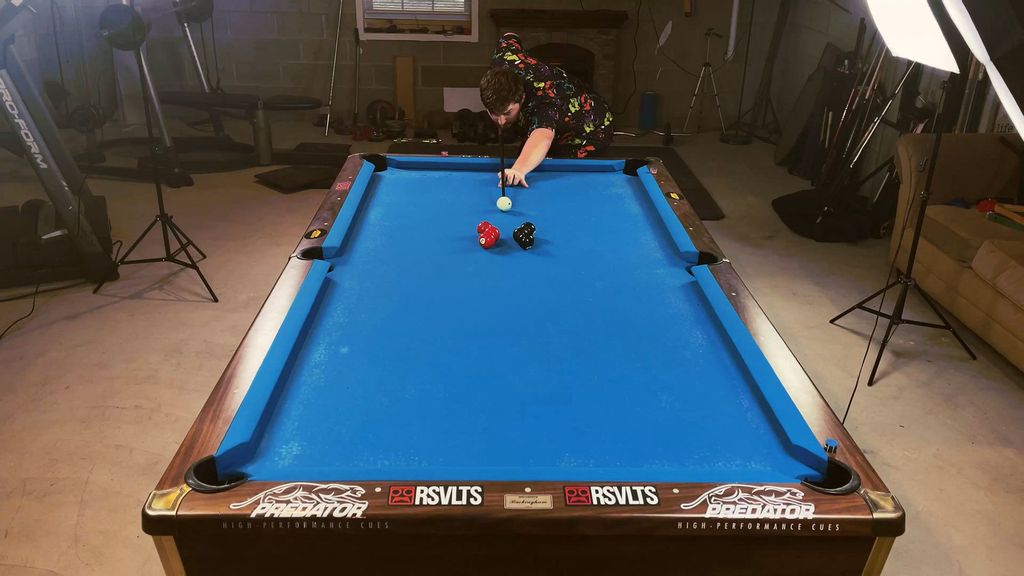 Iulian Cernatinschi's views of his trick-shot videos number in the millions. (Trickshot CEO/Zenger)

A man known as Trickshot CEO on Tik Tok has garnered 2.5 million followers for videos showing his prowess at trick shots on his pool table.

Iulian Cernatinschi, of Union Beach, New Jersey, was among the youngest players to ever compete in the World Artistic Pool Championships as of 2012. He was 14 and had only recently moved to the United States from Moldova.

“Artistic pool is more than just trick shots, it is testing a player in all skills involved in pool,” according to the World Pool-Billiard Association. “Artistic pool is broken down into eight disciplines: trick and fancy; special arts; draw; follow; bank/kick; stroke; jump; masse.

“To be a good artistic pool player,” the association states, “one needs to have all pool skills. From the pinpoint accuracy of set of shots (Trick and Fancy) to the power stroke shots, artistic pool will test even the best pool players.

“Artistic pool is also about entertaining the fans watching events, as well as raising money for local charities through raffles and a new speed pool event.”

“I only started playing pool when I was around 12 years old, but it really became a passion for me when I started having fun making videos for social media,” Cernatinschi said.

“Some shots gradually are quite easy to do, maybe just one or two tries; others can take minutes or hours and some can take days.”

Part of the success is in the planning, he said, as well as the amount of chalk on the cue, which can affect the success or failure of a trick.

He said that not all of his shots are original, as he likes to recreate some of the great shots. But he also creates his own to contribute to the trick-shot landscape.

“Many comment that I use a string, or that there are magnets in the ball, but honestly, it’s probably easier to make the shots than it is to fake them,” he said.

Cernatinschi, a junior art director at RSVLTS in New York City, said he performs the trick shots “mostly as a hobby, I play for a few hours on the weekends, and very rarely after work.”

Pool developed some time in the 15th century in Northern Europe. Initially played outside, like croquet, it moved indoors to a wooden table with green cloth — to mimic grass. Royalty played it in the early 1800s, but the game was public knowledge in the 1600s.