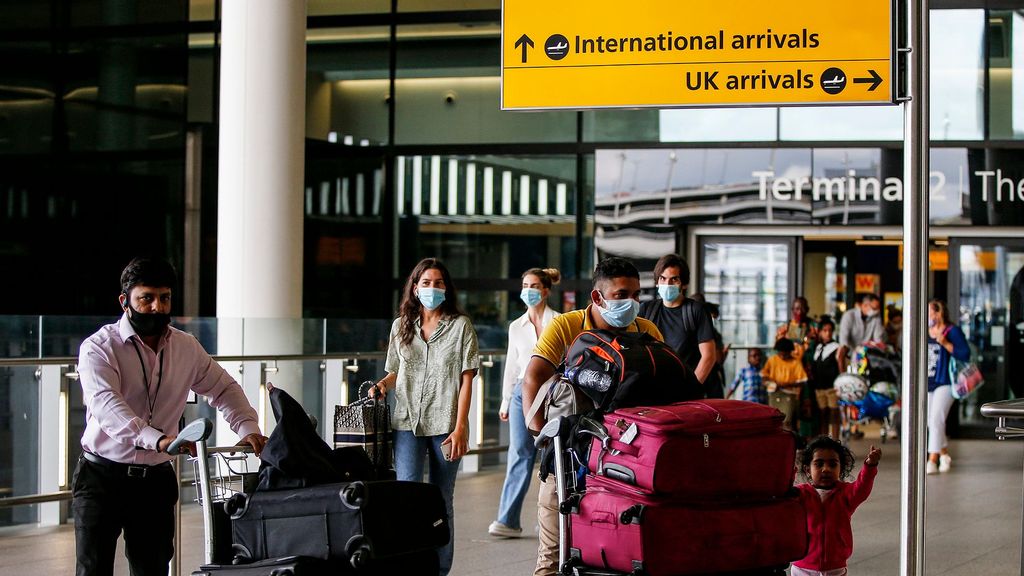 Flyers at the Heathrow Airport on August 22, 2020, in London, England. (Hollie Adams/Getty Images)

J.O. Churchill, in a letter dated Aug. 6, explained the reasons for keeping Pakistan on the red list of countries.

“United Kingdom’s Joint Biosecurity Centre continues to assess risk based on factors including incidence, trends in deaths/hospitalizations, exported cases as well as testing and test positivity rates,” she said.

The Conservative member of parliament’s response comes after Pakistan’s retention on the red list of countries in the latest Covid-19 travel update set off the harsh criticism from the South Asian nation and British Parliament’s lower house directed at her.

The British government placed Pakistan and India on the red list respectively on April 2 and April 19. However, in an updated list, the government announced that India, Bahrain, Qatar, and the United Arab Emirates would be moved to the “amber list” from Aug. 8.

“In Pakistan, the combination of a deteriorating epidemiological situation—combined with low testing rates and limited genomic surveillance—presents a high risk that an outbreak of a new variant, or existing VoC [variant of concern], will not be identified before it is imported to the UK,” said Churchill in the letter.

The British health official said the current trajectory of the pandemic in Pakistan is also of particular concern.

“Major cities like Karachi have reported positivity rates of up to 20 percent,” said Churchill.

The British government maintains that Pakistani health authorities failed to provide transparency regarding immunization, incidence, and Covid-19 testing, which resulted in its retention on the “red list.”

Churchill, in her letter, clarified that the decision to keep Pakistan on the list was informed purely by public health risk assessment. Meanwhile, other members of the parliament have decried the development as India—which had an incidence rate nearly twice as high as Pakistan’s—was moved to the “amber” list while Pakistan and Bangladesh remain.

The designation as a red-list country means only the United Kingdom nationals and those with residency rights will be allowed to travel to the country if they stayed in Pakistan for the ten days before they arrive. The “amber” travel list means that returnees can quarantine at home rather than in a hotel.