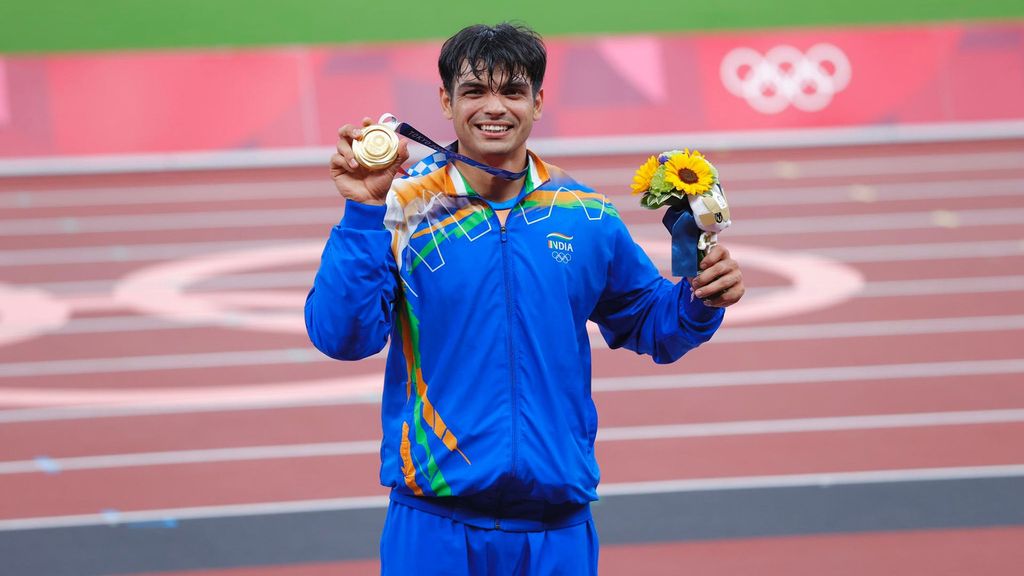 As an overweight 12-year-old boy from the northern Indian state of Haryana, Neeraj Chopra was persistently persuaded by his family members to take up sports. (Neeraj Chopra, @Neeraj_chopra1/Twitter)

NEW DELHI — The moment athlete Neeraj Chopra threw his javelin at a distance of 87.58-meter at the Olympic Stadium in Tokyo on Aug. 7, India got its first gold medal in Athletics.

The achievement will now be remembered as the number that destroyed numerous barriers for the 1.3 billion population.

While many advocated on social media that Chopra himself can play in his biopic, the star athlete wants to focus on his game as of now.

“Do not know about the biopic,” said Chopra.

“I want my focus to be on the game, and after I stop playing, these will look good. Then there will be a new story. Let me focus on my game, too. Till an athlete is active, there should be no biopics, and when my playing days are over, we can think about that.”

Neeraj, on Aug. 8, dedicated his medal at the Tokyo Olympics to India’s track and field legends Milkha Singh and P.T. Usha.

“I have watched a lot of videos of Milkha Singh talking about how he wanted someone from our country to go to the Olympics and do what he narrowly missed out on,” said Chopra.

“As soon as I won and when the national anthem got played, I remembered that and this wish of his. Sadly, he is not with us anymore, but his dream has been fulfilled. Even PT Usha ma’am had missed out on a medal by a whisker. She would have been happy now.”

For Chopra, the grass was not always this green.

As an overweight 12-year-old boy from the northern Indian state of Haryana’s Khandra village, he was persistently persuaded by his family members to take up sports. As per some reports, at the age of 13, he weighed more than 80 kilograms (176 pounds) and was getting bulled by children of his age.

He ultimately gave in to all the badgering and began training at the Shivaji Stadium in Panipat, Haryana.

That was until he saw a few seniors throwing javelins at the stadium and decided to try his luck at javelin’s throw. Fortunately for him, that sport truly captured his fancy as he began training rigorously to get into better shape.

Soon, he began to turn the heads with his flair and the distances that he started recording.

In 2016, the flamboyant Chopra announced his arrival on the field by shattering the World Junior record with a throw of 86.48m. He then became India’s first javelin thrower to win a gold medal at the 2018 Commonwealth Games and 2018 Asian Games.

Chopra did not stop there. He sharpened his skills under the guidance of javelin legend Uwe Hohn.

Hohn, the javelin coach of the Indian team for three years, left the country earlier this year because of differences with the Athletics Federation of India and the Sports Authority of India. Still, before leaving, he ensured Chopra had the necessary skills to be an Olympic champion.

India has now won seven medals in the multi-sporting event with that monumental gold, its best-ever performance.