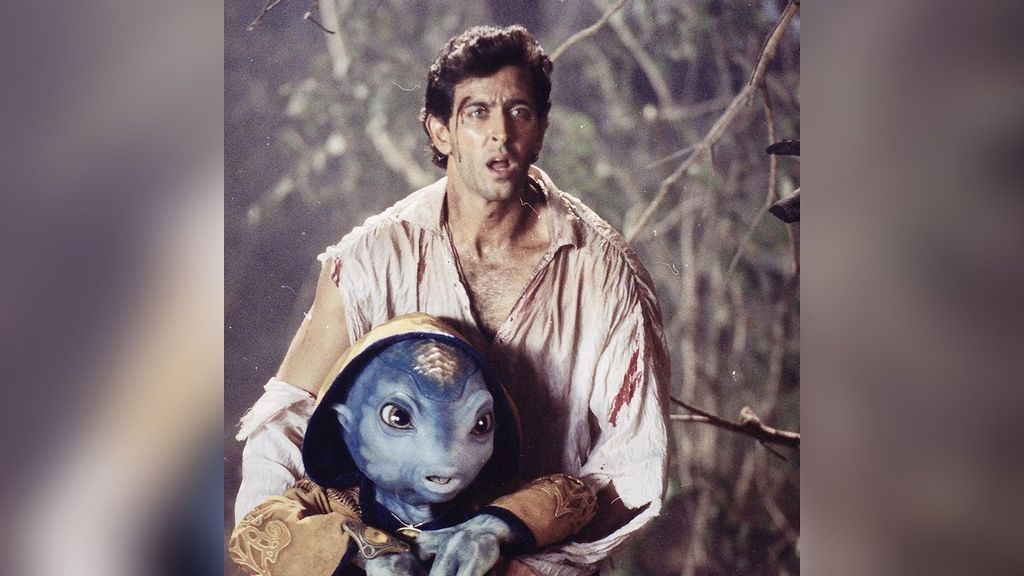 Roshan took to his Instagram and shared two pictures from the 2003 movie, wishing the film’s iconic character “Jaadoo” a happy birthday.

The first snap is a solo picture of the alien character “Jaadoo.” The second picture is a still from the film featuring Roshan as Rohit Mehra with his alien friend.

“To the one who filled Rohit’s and personally my life with happiness & magic (sic),” he wrote, reminiscing about his attachment towards “Jaddoo.”

“He held Rohit’s hand, healed his scars, and made him believe in miracles. Jaadoo was merely 3 when he entered Rohit’s life.”

“18 years have passed by, he turns 21 today. Sometimes, I wonder how he would look like today! What do you guys think? Happy birthday Jaadoo! #HappyBirthdayJaadoo #18YearsOfKoiMilGaya.”

“Koi… Mil Gaya” is a 2003 science fiction film directed and produced by Rakesh Roshan. It stars Roshan and Preity Zinta in lead roles, with Rekha in a supporting role and Rakesh Roshan in a cameo appearance.

In addition to writing the story, Rakesh Roshan also wrote the screenplay with Sachin Bhowmick, Honey Irani, and Robin Bhatt.

Co-actor Zinta also celebrated “Koi… Mil Gaya’s” 18 years by sharing a video compilation of several on and off-screen pictures from the movie.

In the post on Instagram, she talked about how special the film and her character are to her.

“’Koi… Mil Gaya’ was special in so many ways. Its purity, simplicity & Jaadoo captivated not just us as actors, but an entire generation of kids & families (sic),” she wrote.

“For me, it was really special because it brought out the kid in me. Playing Nisha gave me so much joy. Cannot believe it’s been 18 years. A big Thank you to everyone that was a part of it, everyone that saw it & everyone that went on this joyride with us (sic).”

“Koi… Mil Gaya” focuses on Rohit (Roshan), an intellectually challenged boy who traces his father’s footsteps and tries to create contact with extra-terrestrial species or aliens. When one of them lands on the earth and is left behind, Rohit befriends and hides him in his house. The alien, in return, gives Rohit some special powers, which result in comical and emotional events afterward.

Indravardan Purohit, who passed away on Sept. 28, 2014, was a dwarf who played the role of “Jaadoo” in the film.

Roshan, who is best known for his films like “Kaho Naa Pyaar Hai,” “Lakshya,” “Super 30,” “Zindagi Na Milegi Dobara,” “Kabhi Khushi Kabhie Gham,” “Jodhaa Akbar,” and many more, has an exciting line-up of films in the future.

He would be seen starring opposite actor Deepika Padukone in Siddharth Anand’s directorial “Fighter,” slated to release in 2022. Apart from that, Roshan would be seen in the Hindi remake of the 2017 Tamil film “Vikram Vedha” opposite Saif Ali Khan and helmed by Pushkar and Gayathri.

“Krrish 4,” an installment of Roshan’s superhero franchise, is also in the pipeline.

He was last seen in Anand’s 2019 action thriller “War” as Major Kabir Dhaliwal opposite Vaani Kapoor and Tiger Shroff.