38 Detained For Attack On Hindu Temple In Pakistan

Pakistan detained 38 persons for the attack on the Hindu temple in Rahim Yar Khan. 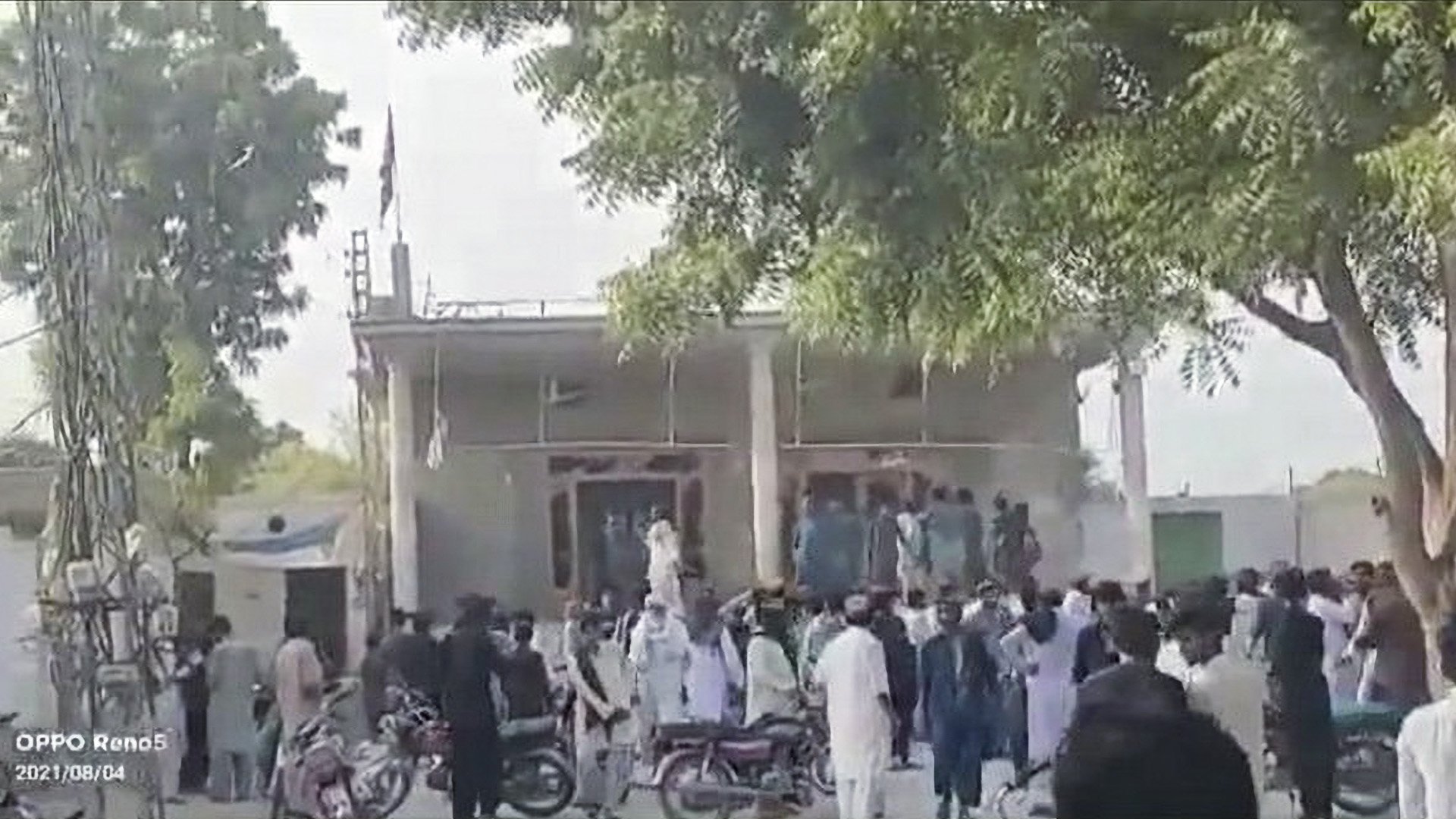 A mob gathered outside temple in Bhong city in Rahim Yar Khan district of Pakistan. (ANI)

ISLAMABAD — Slammed repeatedly by the international communities for not lingering thoughts regarding the interest of its minorities, Pakistan detained 38 persons on Aug. 7 for the Hindu temple attack in western Pakistan district, Rahim Yar Khan.

Thirty-eight of the detained persons were presented before an anti-terrorism court in Pakistan’s Bahawalpur, as per the police.

Chief Justice Gulzar Ahmed had, on Aug. 6, reprimanded the Punjab police chief for failing to take action to safeguard the Hindu temple from the mob in Rahim Yar Khan, directing him to arrest all culprits involved in the incident.

A mob comprising over a dozen men armed with sticks had vandalized a Hindu temple in village Bhong of Rahim Yar Khan, shouting slogans and desecrating idols in the place of worship.

Pakistani lawmaker and Hindu community leader Ramesh Kumar Vankwani shared videos of the incident. In one of the videos, the mob could be seen destroying the infrastructure of the temple.

“Attack on the temple. It is hoped that the Supreme Court directive will be acted upon soon,” tweeted Vankwani.

In recent years, there has been a surge in attacks on the place of worship of religious minorities in Pakistan. The country has been repeatedly slammed by the international community for not safeguarding the interest of its minorities.

In widely circulated video clips on social media, attackers were seen carrying sticks, stones, and bricks. They were seen destroying the infrastructure of the temple.

“Pakistani charge d’affaires was summoned, and a firm protest was lodged, expressing our grave concerns at this reprehensible incident and the continued attacks on the freedom of religion of the minority community and their places of religious worship,” said Arindam Bagchi, spokesperson, Ministry of External Affairs.

Pakistan Prime Minister Imran Khan condemned the attack on a Hindu temple in the country’s Punjab province and had assured that action would be taken against the culprits.

A recent report by a minorities’ rights commission in Pakistan has revealed a “dismal” picture of the most revered Hindu sites in the country.

In April, the report submitted to the country’s Supreme Court presents a “general picture of decay and obliteration” of two of Pakistan’s four most revered evacuee sites.

In December 2020, a mob of over a hundred people led by local Muslim clerics had destroyed and set on fire the temple in the Karak district of Khyber Pakhtunkhwa province. A video clip that went viral on social media showed a violent mob destroying the walls and roof of the temple.

Pakistan has been discriminating against its religious minorities, which is manifested in various forms of targeted violence, mass murders, extrajudicial killings, abduction, rapes, forced conversion to Islam, etc., making the Pakistani Hindus, Christians, Sikhs, Ahmadiyyas, and Shias one of the most persecuted minorities in the region.