VIDEO: Grizzly Scare: Amazing Courage Of Tourist Who Saved Pals From Bear Simply By Talking To It 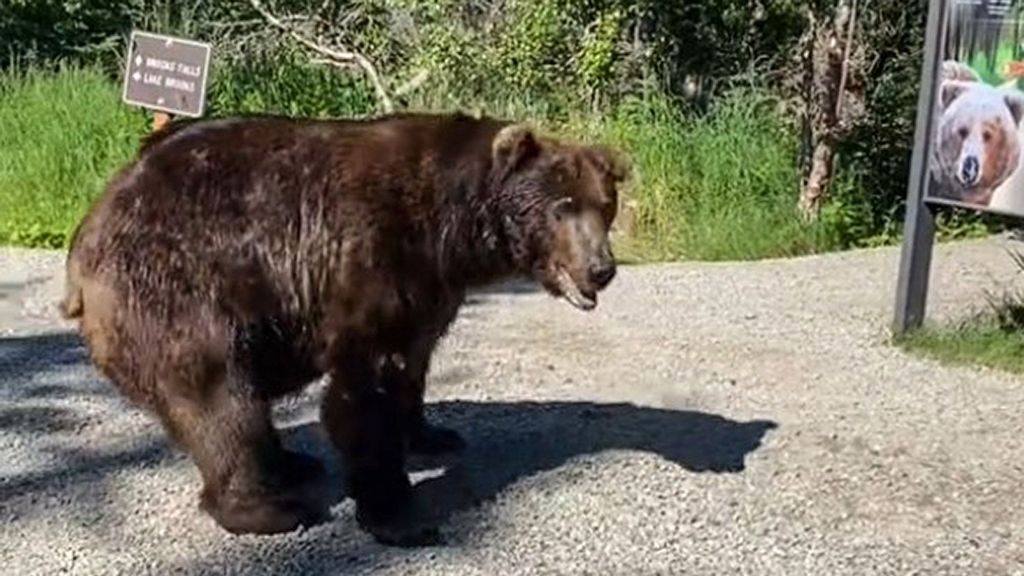 The brown bear strolled by a group of tourists in Alaska on Aug. 4 but did not harm them. (@mrsb111/Zenger)

A large Alaskan Grizzly saunters past a group of travelers and does not attack them, a video shows. By keeping their cool, experts say, their calm behavior saved their lives.

Bear experts said the small group in Alaska’s Katmai National Park on Wednesday followed the U.S. National Park Service’s protocols: They did not scream or run.

One man in the group spoke calmly to the bear, trying to assure it they meant no harm.

Video shows the massive bear with visible scars. Tourists said the bear had been fighting another bear a short while before walking down the road. When it reaches a signpost with an image of a bear looking back at it, the animal turns around and walks past the people again.

Some of the tourists had gone into a nearby restroom to hide from the bear.

All the while, the soothing voice of the seaplane captain who had flown the visitors to the wilderness park, is heard repeating, “hey, big boy” in an effort to maintain control of the situation.

Cara Siciliano, a real-estate broker from Fort Myers, Florida, who shot the video, said: “Honestly, I am amazed I did not seem more scared. My first reaction was to look up at the sky and make sure I was good with God and to pray. And then I hit record on my phone.”

Siciliano said the reason the bear was breathing heavily was that it had just been in a fight.

She said the other bear was briefly visible at the start of her video.

Siciliano praised the seaplane captain for his calm, steady approach to the bear.

“My seaplane captain said he walked that trail 1,000 times and has never seen anything like it,” she said.

Bears from the Alaskan interior are smaller than coastal and island bears. Adults boars weigh from 300 to 900 pounds. Adult sows are 200 to 450 pounds.

The species eats salmon, berries, grasses, sedges, cow parsnip, ground squirrels, carrion and roots. Brown bears are also predators of moose and caribou. They can be drawn to human camps and homes if food is improperly stored.

Alaskan bears usually hibernate from October or November until April or May. Sows give birth in the den to one to four cubs in January or February.