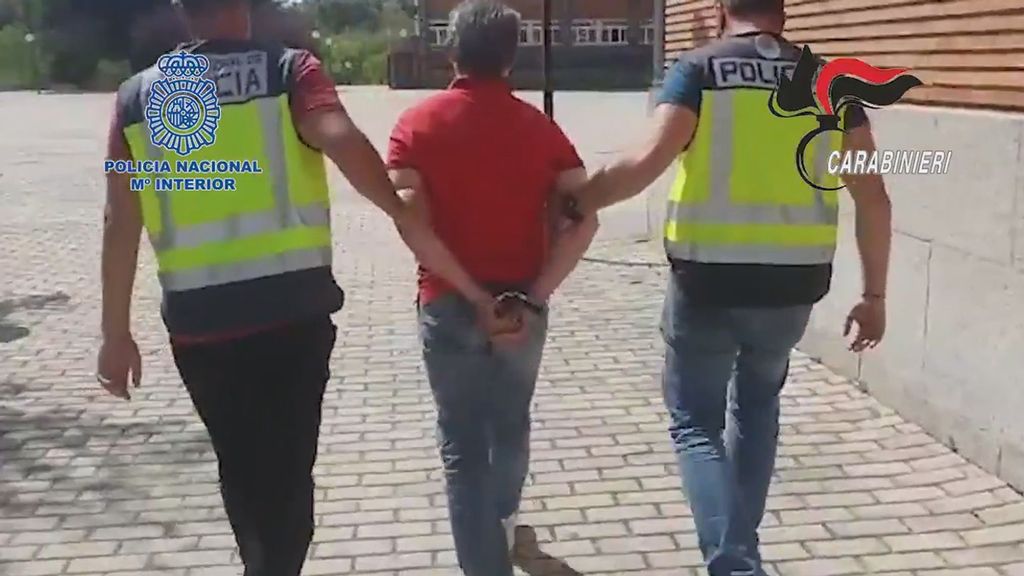 Fugitive Domenico Paviglianiti, center, is taken back into custody by authorities in Spain. The mafia don was mistakenly released from an Italian prison in 2019. (Arma dei Carabinieri/Zenger)

An Italian mafia boss who was on the lam after being mistakenly released from prison in 2019 has been arrested in Spain, where he was living under the radar with fake documents.

Domenico Paviglianiti, who was a leader of the ‘Ndrangheta mafia clan, was arrested as part of a joint investigation by the Italian and Spanish police in Madrid on Aug. 5.

Now 60, Paviglianiti was known as the “Boss of Bosses” in the 1980s and 1990s, when he was a high-ranking leader of the notorious crime syndicate from the southern Italian region of Calabria.

The ‘Ndrangheta — which translates to “a courageous and brave man” — still operates in parts of the Italian regions of Lombardy and Calabria, as well as in South America, where it is involved in international drug trafficking, according to a U.S. Department of Justice report on the group.

The Spanish police said Paviglianiti was sentenced to 30 years in prison in 2005 for murdering a man.

However, his lawyers got him off by lodging a successful appeal against his extradition to Spain, as he was serving a life sentence for crimes, including murder and drug trafficking, in his home country at the time.

Paviglianiti was originally arrested in Spain in 1996 and extradited to Italy three years later. However, his sentence came to an end in 2019 after he was released on a technicality later found to be erroneous.

Once released, he fled to Spain, staying with relatives in Barcelona before later moving to Madrid, where he remained under the radar.

At the time of his most recent arrest, Paviglianiti was reportedly carrying fake Portuguese documents, almost 6,000 euros (about $7,000) in cash and six mobile phones.

He was sought by the police because he still had 11 years of a 16-year prison sentence in Italy to serve.

It was not immediately known if he will be sent back to Italy or remain imprisoned in Spain.

The share of illicit markets and the criminal methods used by the ‘ndrangheta that Paviglianiti was part of are just as extensive and ruthless as those employed by the Sicilian mafia, the Department of Justice’s report on the group says.

“Their political influence, willingness to use violence and infiltration of legitimate businesses are significant,” according to the DOJ’s report. “There is some evidence that ‘ndrangheta has cooperated with Cosa Nostra in terrorist acts to intimidate the government into softening its attacks on organized crime in Italy.”