The findings of a new research shed light on the evolution, transmission and colonization in humans of beneficial bacteria. 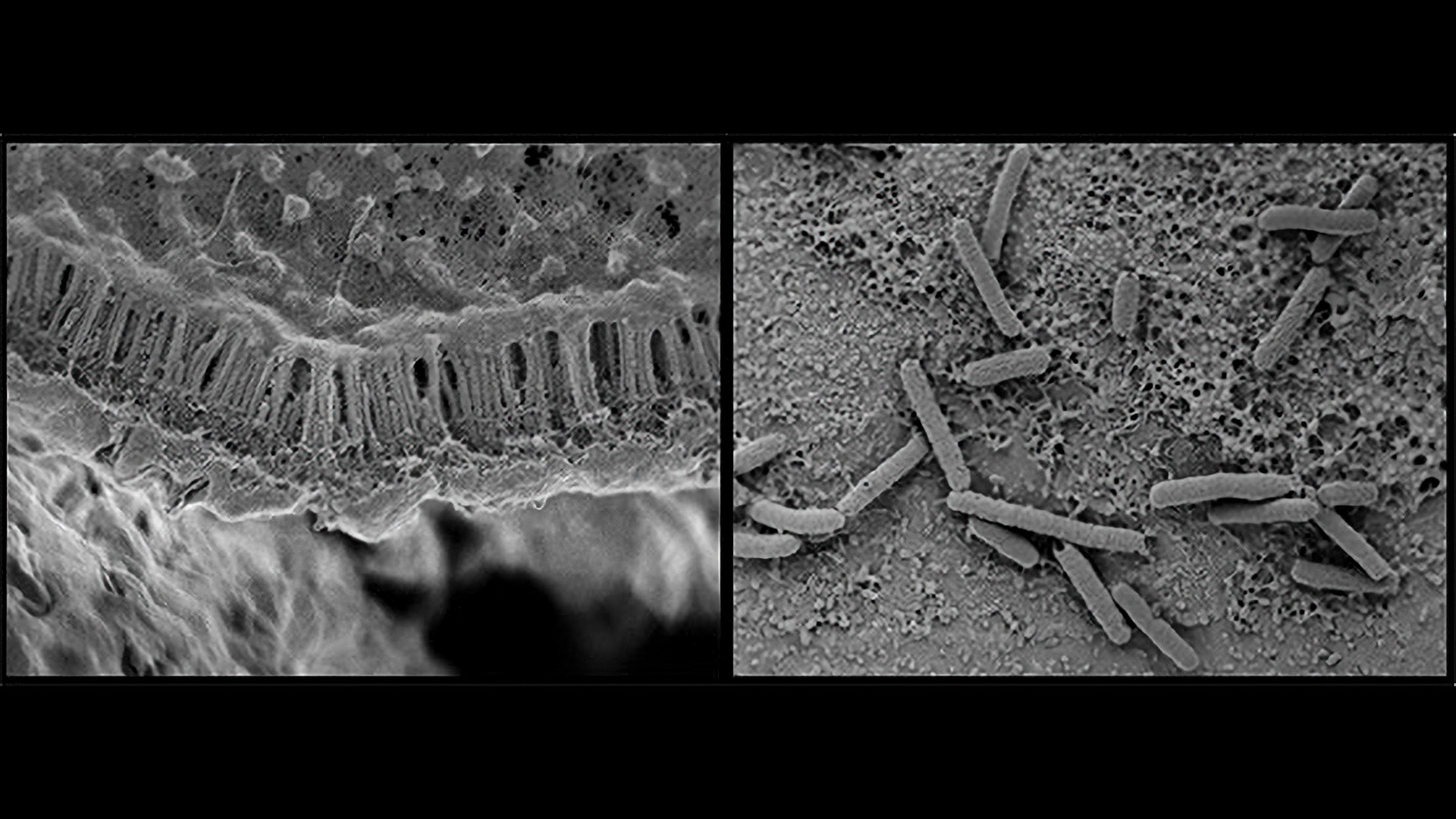 The photo on the left, taken with an electron microscope, reveals how these micro-guts can be modified to form layers that can accommodate various experiment protocols. It shows villi and other protein structures that match what would be seen in the human body. The image on the right depicts rod-shaped bacteria that researchers can add to the micro-gut system to study how bacteria living in the human gut affect health and disease. (Cincinnati Children’s Hospital)

NEW DELHI — Beneficial bacteria in the intestine use different means to transmit from one person to another, impacting their abundance in the gut and their functions.

New research explores the evolution or adaptation of bacteria to a human host. The findings could inform decisions as to what specific bacteria could be given to people based on their ability to colonize and levels of metabolic activity each indicates.

“Human-to-human transmission of symbiotic, anaerobic bacteria is a fundamental evolutionary adaptation essential for membership of the human gut microbiota,” said the research.

“However, despite its importance, the genomic and biological adaptations underpinning symbiont transmission remain poorly understood.”

This novel research, published in the journal Genome Biology by scientists at the Wellcome Sanger Institute, used genetic sequencing to shed new light on gut bacteria’s evolution, colonization, and transmission, which play a significant role in human health.

The study provided a deeper understanding of the evolution of bacteria in the human microbiome. It could also inform the development of microbiome-based therapeutics where essential bacteria could be selected to treat different intestinal-associated illnesses.

Humans are populated by many microorganisms, called a microbiome, which includes bacteria, viruses, archaea, and fungi. Beneficial bacteria in the body roughly match human cells one to one, and in the gut, this collection of bacteria has been found to play an important role in human health.

The makeup of the gut microbiome affects the immune system, prevents infections, and supports the body by breaking down some carbohydrates that human cells cannot do alone.

“Even though transmission of gut bacteria between humans is essential for their survival, the genetic and biological features of the bacteria that allow them to do this is still poorly understood,” said Hilary Browne, first author, and Staff Scientist at the Wellcome Sanger Institute.

“This research starts to unravel some of this mystery by analyzing the genomes and finding that the ability of bacteria to produce spores has been lost multiple times, impacting their evolution and function. It is necessary to continue looking at the genetic detail of the microbiome to help understand the roles of specific bacteria and how lacking these might impact human health.”

For bacterial species in the gut to survive, they have to transmit from one person to another. Gut bacteria are mainly anaerobic, meaning they cannot survive in oxygen. To spread, some produce spores, which are sometimes likened to seeds and can lie dormant until they encounter the right conditions to grow.

From the Wellcome Sanger Institute, this research investigated the group of bacteria known as the Firmicutes, which are dominant in the human microbiome and produce spores. The researchers analyzed the genomes of 1,358 Firmicutes and tracked the evolution of certain characteristics, including spore production.

They observed that gut bacteria that form spores were found at lower abundances in the gut and had larger genomes compared to those that had lost the ability to produce spores (sporulate). Their genomes also had more genes associated with carbohydrate metabolism and vitamin biosynthesis, which suggests that they have important metabolic functions.

Firmicutes bacteria that could no longer form spores had smaller genomes but were present at higher abundances in the gut and had a more specialized metabolism based on genome analysis. They were also less prevalent in the general population, meaning they were found in a smaller number of individuals, suggesting loss of sporulation limits their ability to transmit widely.

Smaller genomes and more specialized metabolism indicate that bacteria that have lost the ability to sporulate are becoming more adapted to their human host, which could allow them to colonize to higher levels in the gut. On the other hand, bacteria that still produce spores appear less adapted to humans based on their larger genomes which could explain why they are not as abundant in the gut.

These differences show that transmission is a necessary process that shapes the evolution of gut bacteria, and further research is now needed to continue to learn more about the link between the transmission of gut bacteria and the roles they play in human health. Understanding these processes could help inform therapeutics, such as investigating whether specific bacteria could be given to people based on their ability to colonize and how the differing metabolism of these bacteria could impact health conditions and treatments.

Trevor Lawley, senior author and Senior Group Leader at the Wellcome Sanger Institute, said that the microbiome plays an essential role in human health and development and influences a wide range of physiological functions in the body.

“Understanding more about the bacteria that inhabit us and how they are adapted to living in humans through their metabolism will be important for the development of new therapeutics and diagnostics for microbiome-mediated diseases.”