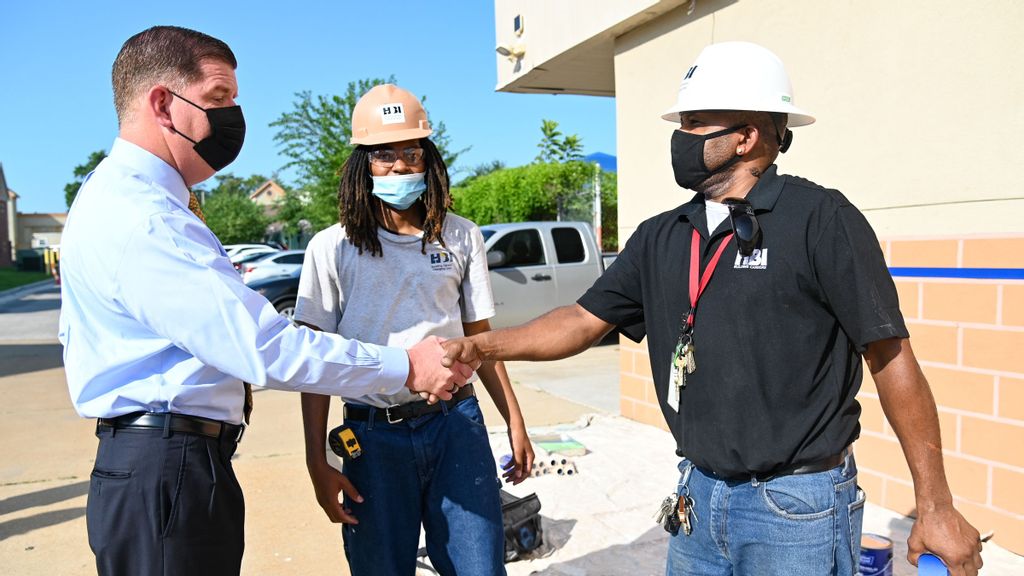 U.S. Labor Secretary Marty Walsh during a July 15 visit to a Jobs Corps center in St. Louis, Mo. The corps is a Department of Labor-funded program that provides no-cost education and vocational training programs. (Department of Labor photo)

More people are working, and they’re making more money. That’s the conclusion from the U.S. government’s monthly job report released on Friday, Aug. 6, which showed an addition of nearly 1 million jobs to the economy, a precipitous drop in unemployment and steady increase in wage growth.

Following a jobs report roundly praised by economists — one called it a “blockbuster” — some are wondering if the economic momentum could lead to “overheating,” with calls for easing federal economic help growing. Meanwhile, others are sharply watching the increasing COVID-19 infection rates as the Delta variant of the virus continues to spread in the U.S.

The monthly “Employment Situation” report released by the U.S. Bureau of Labor Statistics showed positive trends across the board, economists said. Not only did the report add 943,000 jobs to the economy in July, the unemployment rate fell a half-percent down to 5.4 percent.

Wages showed continued growth, as the 11 cent rise in average hourly wages in July equaled another 0.4 percent of wage growth in a year that has already seen pay go up 4 percent to an average of $30.54 per hour across industries. The report even added more strength to prior months’ reports, as 119,000 jobs were added to the May and June reports.

“I have yet to find a blemish in this jobs report. I’ve never before seen such a wonderful set of economic data,” wrote Harvard University economics professor Jason Furman, adding that he always begins reviewing each report by looking at a key set of numbers, including jobs added, unemployment rates, wages and the labor participation rate. “Rarely do all of them move in the right direction. This month they did.”

The 0.5 percent drop in unemployment was solid, said Janelle Jones, the chief economist at the U.S. Department of Labor, noting that sometimes a drop in unemployment comes with people leaving the workforce. However, both the labor force participation rate and the employment-to-population ratio were up.

“This tells us that people are looking for work and finding jobs,” Jones wrote in her analysis of the report.

And while small business owners reported separately that they are still struggling to hire workers, they are offering higher wages.

The organization released its own monthly jobs survey on Thursday, which this month continued to show that nearly half of all small businesses couldn’t fill open positions. However, it also said that 61 percent of business owners reported hiring or trying to hire in July, up two points from June.

For months, economists have been eyeing the job report to compare growth with pre-pandemic levels. While the number of jobs in the economy is still below February 2020 levels, economists said the workforce is making strides to repair the damage done by the pandemic.

With this report, the Labor Department’s Jones said that the U.S. economy has reached a milestone in restoring 75 percent of the jobs lost in March and April 2020, when the COVID-19 lockdowns began. Similarly, temporary layoffs dropped by 572,000 to 1.2 million in July.

“Not much more room for this to fall,” wrote Daniel Zhao, senior economist for job recruiter Glassdoor. “Future job gains will have to largely come from hiring new workers rather than rehiring furloughed workers.

July is generally a slow month for job growth, as the pre-summer hiring blitz has ended and education job hiring is low, which further underscores the strength of the report, Zhao said.

Meanwhile, some lawmakers are arguing that the good economic news means that the Federal Reserve can end its efforts to prop up the economy through “quantitative easing,” where it buys bonds to inject liquidity into the system.

While Republicans have previously called for the Federal Reserve to “taper off” the process, a high-profile Senate Democrat, Joe Manchin of West Virginia, is now echoing those calls. As quantitative easing runs the risk of increasing inflation — resulting in goods and services costing more for consumers — Manchin wrote to Federal Reserve Chairman Jerome Powell, asking him to wind down the bond purchases.

“The record amount of stimulus in the economy has led to the most inflation momentum in 30 years, and our economy has not even fully reopened yet,” Manchin wrote on Aug. 5, before the release of the positive jobs report. “I am deeply concerned that the continuing stimulus put forth by the Fed, and proposal for additional fiscal stimulus, will lead to our economy overheating and to unavoidable inflation taxes that hard working Americans cannot afford.”

As it has in prior months, the biggest job gains came in the leisure and hospitality industry, as bars, restaurants and travel destinations continued to reopen. However, other industries are now catching up as more businesses open to serve the public, said Diane Swonk, chief economist at Grant Thornton, of the “blockbuster” jobs report.

“Vaccines are playing a key role,” Swonk wrote on Twitter. “Healthcare and professional services saw solid gains. Hiring for accountants is one area that has recouped all earlier losses and soared well ahead of pre-crisis levels. We also saw the movie business come back after a long hiatus.”

Meanwhile, economists said future reports — particularly the August numbers, which will be released in early September — will be key in helping motivate the Federal Reserve to end its economic stimulus.

There could be even more economic stimulus on the way if the U.S. Senate moves forward with a $1 trillion infrastructure package that has been negotiated throughout the summer. During remarks President Joseph R. Biden Jr. made following the jobs report, he urged the Senate to approve the pending legislation, arguing it will provide another boost to the economy, creating “millions of good paying jobs,” 90 percent of which are “blue collar” jobs that don’t require a college degree.

However, Biden also warned about the Delta variant of the COVID-19 virus and urged people to get vaccinated. It was a concern echoed by several economists on Friday.

“Of course, the elephant in the room is Delta. That certainly could slow the recovery in coming months,” Glassdoor’s Zhao said.

Similarly, Biden said the Delta variant could stand to undo an economic plan he said has produced the fastest economic growth in 40 years.

“We just have to keep things going, so get vaccinated, please,” Biden said.