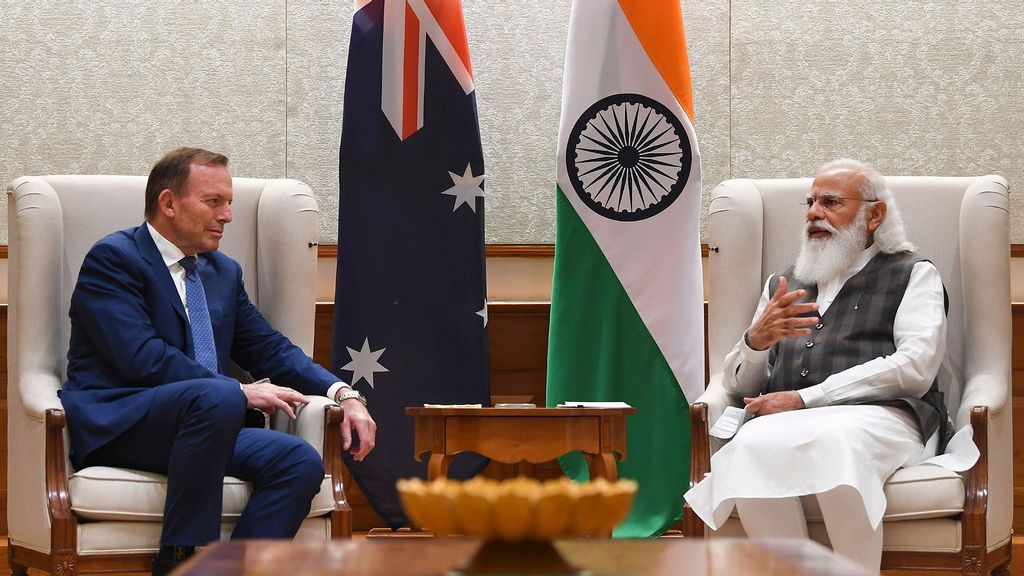 “The prime minister and the now trade advisor to the United Kingdom discussed ways to further strengthen bilateral trade, investment, and economic cooperation to realize the full potential of the India-Australia Comprehensive Strategic Partnership,” said the Prime Ministers Office in a statement.

“They emphasized that enhanced economic cooperation between India and Australia would help both countries better address the economic challenges emerging out of the Covid-19 pandemic, and would also help them in realizing their shared vision of a stable, secure, and prosperous Indo-Pacific region.”

Modi expressed his satisfaction at the stellar growth of India-Australia ties in recent times and acknowledged the important contributions of Prime Minister Scott Morrison and the former prime minister in this journey.

He also recalled his virtual summit last year with Morrison and reiterated his desire to host Morrison in India as soon as conditions permit.

At the Leaders’ Virtual Summit held between Modi and Morrison on June 4, 2020, the bilateral relationship was elevated to a Comprehensive Strategic Partnership, under which India and Australia committed, among other things, to encourage expanded trade and investment flows for mutual benefit and decided to re-engage on a bilateral Comprehensive Economic Cooperation Agreement.

The present visit by Tony Abbott AC is reflective of this shared ambition, as per the statement.

A Finance Ministry release said that Abbott complimented India for undertaking comprehensive and sustained reform programs. The country has continued to demonstrate robust growth despite the disruptive impact of the pandemic.

Abbott emphasized that Australia views India as a long-standing, valued, and trusted partner.

Sitharaman appreciated the credible progress observed in economic and commercial relations between the two countries over the past decade, including the elevation of the India-Australia bilateral relationship into a Comprehensive Strategic Partnership.

“The Finance Minister also emphasized that the complementarities between both countries provide immense scope for augmenting the economic relationship,” the release said.

She highlighted that recent economic reforms and easing of Foreign Direct Investment norms in India provide opportunities for Australian investors. The Australian Superannuation funds have invested in National Investment & Infrastructure Fund and have been invited to look at various opportunities to invest in Indian infrastructure.

The Finance Minister said a team from Australia could engage with the Indian side to better explore the avenues for investment in National Infrastructure Pipeline projects.

The release said that Australia is an important bilateral partner of India. Bilateral trade has been growing steadily for the past decade. There is an immense potential for the two countries to enhance it further in light of the wide spectrum of complementarities and strengths in the post-Covid period.