VIDEO: In The Pink: Fluffy Flamingo Chicks Check Out Their Enclosure With Their Parents

Youngsters keep their gray plumage for a year before their diet helps it change color.
By Arian Movileanu August 5, 2021
Facebook
Twitter
Linkedin
Email 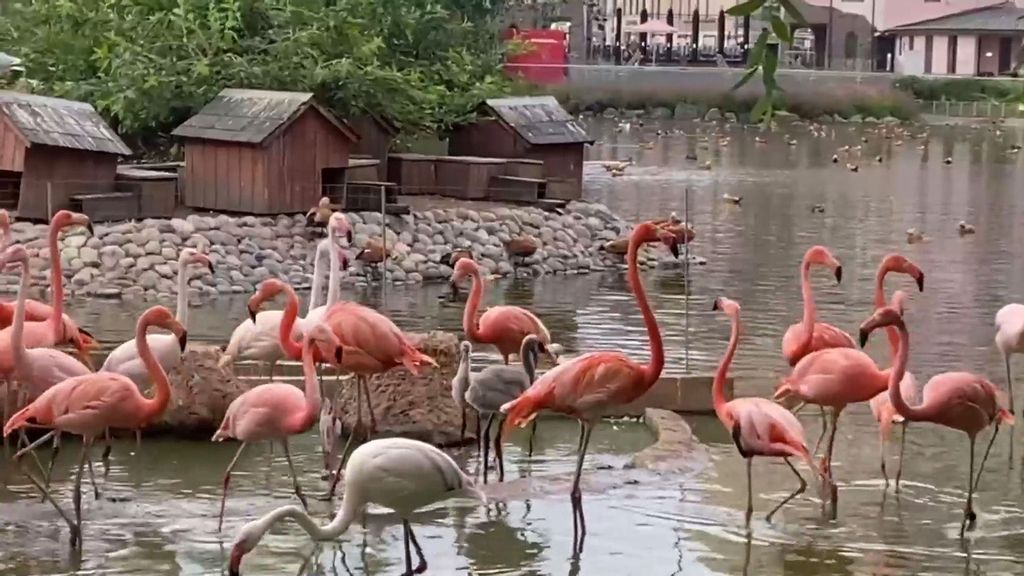 Five flamingo chicks, one pink and four red, were born at the Moscow Zoo in Russia. (@moscow_zoo/Zenger)

Five fluffy flamingo chicks explore their surroundings with their parents after hatching at a Russian zoo.

The chicks were born in the Moscow Zoo after a period of incubation to protect them from being damaged by the often-boisterous flock.

The zoo stated that fights between flamingos often occur during the nesting process and eggs can sometimes be damaged or knocked out of the nest.

“Our zoologists keep a close eye on the flamingos during the entire nesting process. They place the laid eggs in incubators, and in the aviary replace them with dummy eggs filled with sand. After hatching, the mother begins to feed the young. Both parents take care of their offspring equally,” said Moscow Zoo general director Svetlana Akulova.

The zoo said flamingos start breeding almost as soon as they arrive in the outdoor enclosure, and mates build a nest together. However, fights often break out, sometimes because “they like a neighbor’s nest better.”

Both parents feed the newborn via a fluid produced in their digestive systems. Parents can identify chicks by voice. After three weeks, the young are put into larger groups, called crèches, where they search for food on their own.

Male and female birds prefer pairs that are brightly colored. But only the birds that spend most of their time feeding and eating the right diet — one with ample amounts of carotenoids, pigments that produce tomatoes and oranges — will reach the most attractive shade.

The word “flamingo” comes from the Spanish and Portuguese word “flamenco,” which translates as “colored like a flame.”

Flamingos often stand on one leg to better conserve body heat, taking into account the fact that they spend most of their time in the water.

Moscow Zoo said the chicks won’t resemble the pink adults in their “flamboyance of flamingos” until much later. Initially, they appear as “little gray lumps with thin legs. Their pink pigment won’t appear anytime soon. In a few months, it will start to show, but they will have gray plumage for a year or so.”

“The chicks are a little older now and no longer just sit in the nest. They are now walking around the enclosure behind their parents,” the zoo stated.

Flamingos have even secured a memorable place in literature. Alice used them as croquet mallets in Lewis Carroll’s 1871 classic book Through the Looking Glass.

The Andean flamingo is listed as vulnerable, and the Chilean, Lesser and Puna flamingos are listed as near threatened, according to the IUCN, the International Union for Conservation of Nature’s Red List of Threatened Species.