The rescue was potentially dangerous as the cub's mother was nearby.
By Tijana Milikj August 5, 2021
Facebook
Twitter
Linkedin
Email 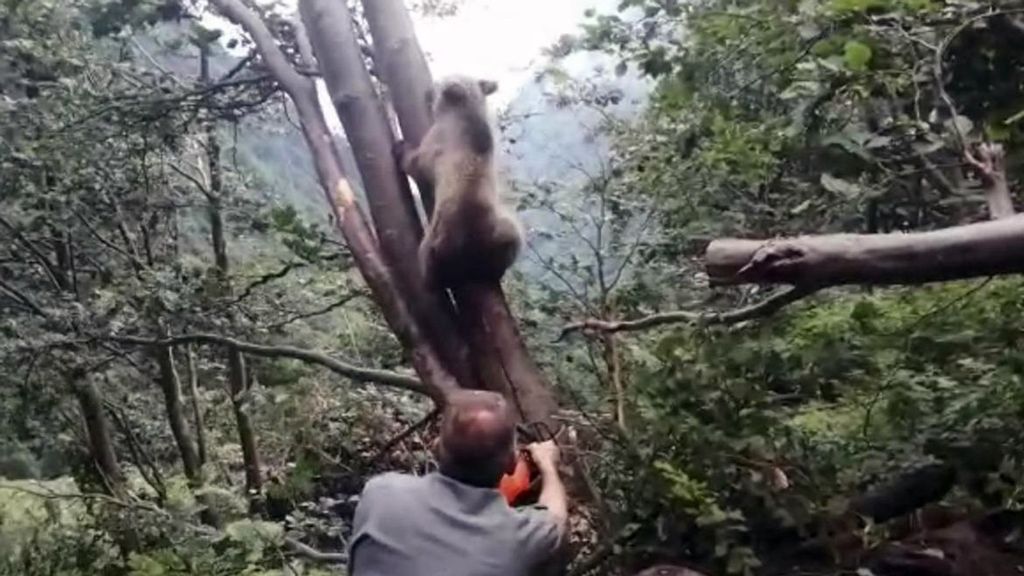 One of the forest rangers works to free a bear cub stuck between two trees in northern Italy. (Provincia autonoma di Trento/Zenger)

Forest rangers who discovered a brown bear cub trapped between trees were able to rescue it on Aug. 5. The freed cub was reunited with its mother.

Though workers in Italy’s northern Trentino province understood the danger of approaching a cub while its mother was nearby, they realized the cub had little chance of getting down on its own.

One of its legs was trapped between two trees in the Val di Non in the San Lorenzo Dorsino area.

The rangers were alerted to the situation after they heard an animal in distress while conducting routine checks of the area.

The Trentino Forestry Corps set up an emergency operation to make sure the cub, reported to be less than a year old, would be freed without risk to the rescuers from the mother bear.

Trentino authorities released a video that shows the mother bear looking at a helicopter as it moves in position over the cub. The young bear’s paw was trapped between the trees. A short while later, the mother bear disappears into the forested area.

Two rangers then move toward the struggling cub, which appears to risk breaking its leg as it twists and turns while trying to get free. One of the rangers, who has a chainsaw, then moves into position after checking the mother bear is not around. He removes a small tree before chopping at the larger tree, sending the tree trunk and the bear cub toppling to the ground.

The mother bear, which had remained hidden from view but was nearby, was reunited with the cub as it ran off into the woods in her direction. The cub did not appear to have suffered any injury from the incident.

The forestry workers were protected by dogs. They said staff on the ground also had bear spray and if necessary, a gun as a final resort.

Forestry officials urged people to keep an eye on the map, which lets them know where mother bears and cubs are located.  They advised the public to avoid contact with the bears and never alarm them.

There are reported to be about 90 bears in the province of Trentino. The species, which had been listed as endangered, is now considered stable, according to the IUCN Red List.  The population has increased in Italy as of a reintroduction program for brown bears in the Alpine region.