No responsibility established for the incident; investigation continues. 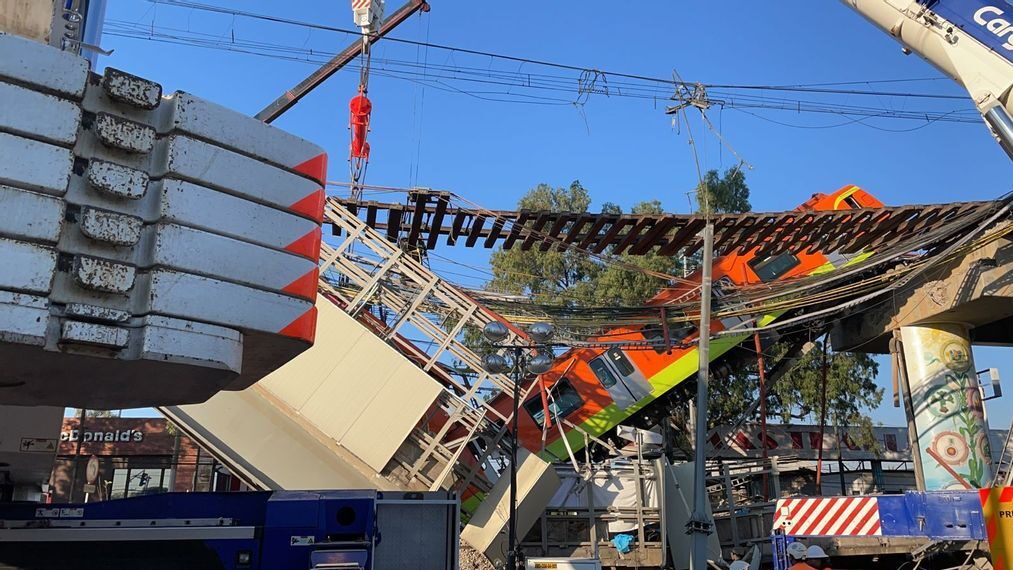 The collapse of a subway overpass left 26 dead and more than 100 injured on May 3, 2021, in Mexico City. (Sandra Itzel López Zepeda/Protección Civil)

MEXICO CITY — A thunderous crash shattered the night of May 3 in Mexico City. An overpass on the subway’s Line 12 had collapsed between the Tezonco and Olivos stations.

Meanwhile, the victims are still trying to heal.

Jesús Baños García used to live a few blocks from the accident. After spending the weekend with his family, he left his seven-year-old daughter with her mother and went to his job in a plastics factory. He never came back.

“At that time, he did not live at home with us; he used to live with his parents,” said Guadalupe Rodríguez Reynoso, Baños García’s wife.

Rodríguez Reynoso heard the noise that morning. Aware that her husband used Line 12 every day, she worried upon learning about the accident. That was when her nightmare began.

“People encouraged me to visit the site of the accident to see if I could find out more information or see something. It was crowded and noisy, and there were lots of patrols,” said Rodríguez Reynoso, who later received a call from her brother-in-law saying that Jesus was indeed traveling in one of the train cars and was injured. But the family still did not know to what hospital he had been transferred.

His name was misregistered on the patient lists, which made the task of locating him even more complex. Finally, the family found Baños García at the Balbuena hospital. The scenario did not look good.

Baños García is on the list of victims with 26 dead and more than 100 injured.

With 4.6 million passengers a day, the subway is the main transportation network in Mexico City.

Mexicans call Line 12 the Golden Line. Its ribbon cutting took place on Oct. 30, 2012, when Marcelo Ebrard, Mexico’s current Secretary of Foreign Relations, was the head of the city government.

Claudia Sheinbaum, the current head of the city government, chose the Norwegian company DNV GL, specializing in navigation, to investigate and deliver an expert opinion at a cost of more than $1.3 million.

DNV GL published its first preliminary report in mid-June. It highlighted at least five structural deficiencies in Line 12: unfinished or poorly executed welds, different types of concrete in the section, lack of fusion in the bolt-beam junction, poor welding in the Nelson bolts, as well as lack of Nelson bolts in the overpass’s beams.

Images taken before the beam’s collapse show a previous deformation in the overpass. But tracks, rails, wagons and switch motors were operating under normal conditions at the time of the accident, per the 64-page document.

The company said it would investigate whether the design was adequate for the operation and the materials complied with what it demanded.

Civil Protection personnel from the Tláhuac municipality pointed out concrete landslides in the beam a month before the accident. Neighbors in the area had also filed several complaints.

“I have a letter dated May 5 — two days after the event — saying that a month before, there was already a concrete detachment in the beam [that could be seen] from the Tláhuac avenue section. [The damage was] in the sixth column of the Nopalera station [a station before the accident]. … The structure posed a risk,” said Sandra Itzel López Zepeda, the Head of the Departmental Unit of Detection, Monitoring and Forecasting Systems of the Tláhuac municipality.

After the incident, people found other affected areas within the same subway line, López Zepeda said.

“In a report dated on June 3, we saw a detachment in the side panel of the column marked as ZDT-19, on the overpass’s south side. … In the ZPT-22 column, one can see a beam not aligned with the column’s base. The wind’s noise indicated that the column was unstable, which concerned the population. There is photographic evidence of an 8-inch detach from those panels,” she said.

The price of a human life

While the investigations continue, the Executive Commission for Attention to Victims (CEAVI) has reported that victims will receive around $96,000 in compensation. Just over $43,500 will come from the subway’s insurance; CEAVI will pay $50,300 and $2,500 will be food aid.

Baños García’s family has received psychological support. Rodríguez Reynoso has also been able to get some information about her husband’s Afore retirement account, as well as support and study grants for their daughter. However, she says that the life of a loved one is priceless. The widow is concerned that her daughter has lost her father, with whom she had a powerful bond.

“The support is good, but we’re still missing him … He obviously cannot return. It saddens me more for my daughter; she lacks someone indispensable to her,” said Rodríguez Reynoso.

The National Organization for State Responsibility, a civil organization of lawyers authorized by the Federal Judiciary, filed a class-action lawsuit on May 6, seeking $300,000 per plaintiff in compensation for direct physical damages. As of this writing, the plaintiffs represent 32 families.

“We joined the class-action lawsuit … It is a 400-page lawsuit, which considers the comprehensive damage repair scheme. What the plaintiffs are pursuing is a human right established in the International Treaty of the Inter-American Convention on Human Rights,” said Jesús Alberto Guerrero Rojas, the organization’s president.

The compensation calculation is based on article 1915 of Mexico City’s Civil Code, according to the organization. The amount is based on the highest minimum wage in the area, $16 a day, multiplied by four and then by the number of days that the Federal Labor Law establishes as compensation for deceased persons, which is 5,000 days.

The organization has included among its complaints the allegation that several victims were treated in public hospitals, even though the subway system’s insurance could have paid for private ones. Emotional, moral and consequential damages, as well as loss of peace of mind, are also among the complaints. The plaintiffs are also requesting a public apology from the authorities.

On July 10, Mexico City’s Second District Judge in Civil Matters, Benito Zurita, dismissed the class-action lawsuit, arguing that it was processed through the wrong legal channel.

“I am not worried about the dismissal,” said Guerrero Rojas. “I have filed an appeal. Usually, that’s how things start, but we’ll move forward. We’ll get to the end of the problem. We are going to demand that those responsible receive a federal sentence. … I tell the victims, ‘be patient, accept what the State is giving you.’ We are going to … fight until the end to make sure that a comprehensive reparation of the damages is fulfilled.”

Meanwhile, Mexico’s President Andrés Manuel López Obrador has apologized to the victims. “I ask your forgiveness. Every day I regret these misfortunes, not as an authority, but as a person,” he said at a press conference on May 18, 2021.

López Obrador and Sheinbaum are working together on the Golden Line reopening. The president has said that the federal government will help rehabilitate the overpass and estimates that it will be operating “safely” within a year.

“I hope this does not go unpunished and the culprits are found so that it never happens again. Line 12 was not far from collapsing, and we would not want this to happen to anyone ever again,” Sheinbaum said.

The May 3 collapse is not the first tragedy for Mexico City’s subway. Two trains of Line 2 collided near the Viaducto station, leaving 31 dead and more than 70 injured in October 1975. Forty years later, in May 2015, two trains crashed at Line 5’s Oceania station, leaving 12 injured and one dead. The person who died was among the personnel repairing the damage. In March 2020, 41 people were injured and a man died when two trains collided at Line 1’s Tacubaya station.