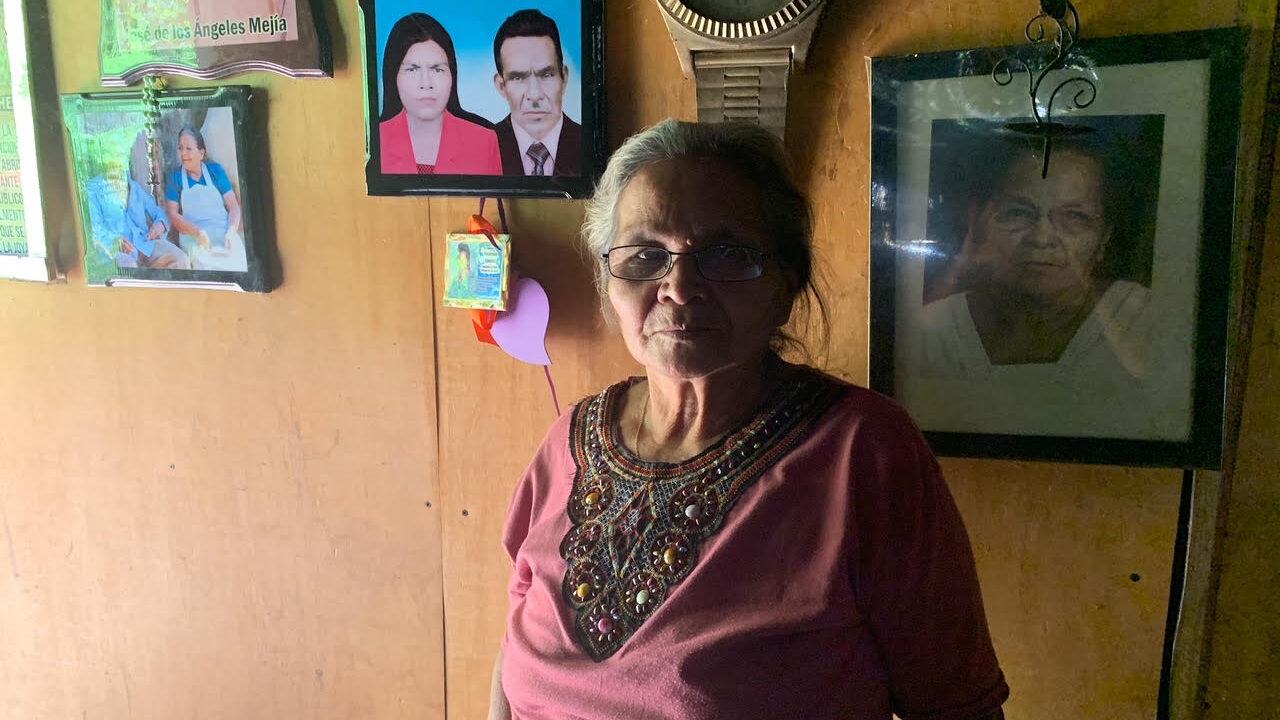 Dozens of Maria del Rosario's family members were mutilated and killed during the 12-year civil war in El Salvador. She and many others from her village, which was the scene of a massacre, are testifying at the war crimes trial underway this year. (Hollie McKay/Zenger)

SAN SALVADOR, El Salvador — A mango tree alongside a sleepy street in the Morazán department of El Salvador marks the spot where dozens of Maria del Rosario’s family members are buried in mass graves.

They were mutilated and killed in the country’s civil war 41 years ago.

“Some we never found,” she said, staring at time-weathered photos taped to the wall of her cement home.

Del Rosario, 77, and many others are still waiting for justice and accountability.

Peace accords were signed in 1992 between the government and the FMLN (Farabundo Marti National Liberation Front) guerrillas, which subsequently became a political party.

Killings in the agricultural region

During the civil war, Del Rosario said insurgents constantly came to her door, demanding corn, beans and bread. She was unable to feed her own young children, but she did everything they asked.

One Sunday morning when she had left to see family in a nearby village, and her husband had gone to bathe in the river, guerillas stormed into her home and took her 14-year-old son, Eugenio, to a training camp.

“I dropped all my stuff and went running for him,” del Rosario said. “I begged the commander. I reminded him how I had given them food when I had none so that they would not take away my only son. But (the commander) told me Eugenio could not leave [training camp]; that wars were not won with bread and corn.”

Eugenio survived six years of the heaviest fighting before he was killed. Del Rosario suffered many miscarriages as the fighting raged, including a near-term stillborn. While she was in hiding in a clinic in the mountains when the baby was born dead, her village of El Mozote and the cantons surrounding it were nearly destroyed.

In December 1981, a Salvadoran army unit stormed the village, demanding everyone join the resistance. For three days, they raped women and girls, massacred more than 1,000 people, and burned the bodies of the dead. More than half of those killed were children.

Barely able to walk, del Rosario hobbled down to the village. There she saw soldiers near the mango tree and the charred remnants of bodies, young and old. She smelled the odors of burned flesh and the burnt houses and heard the screams of crying children.

A week later, she and her husband found the rotting remains of her sister-in-law — her dress pulled up over her head, a grotesque mark of the sexual assault she had endured before being killed.

“When we started to bury the dead,” del Rosario said, “I found my mother’s head. … But I am proud to say that I lived the entire war here; that I never left.”

Little in the way of justice

An amnesty law initiated in El Salvador in 1993 was ruled unconstitutional by the Salvadoran Supreme Court in 2016, allowing the government to prosecute war criminals.

Eighteen military officers were charged in 2017 with orchestrating torture, rape, murder and forced disappearances. As of May, hearings in the trial are underway.  Testimony includes information about the command responsibility of the Salvadoran military and information about the involvement of troops from a U.S.-trained unit, the Atlacatl Battalion.

A sense of solace

Despite the graves that dot the hills, the pained testimonies of scores of survivors, and photographs of broken bodies, del Rosario has found some solace in being one member of her community testifying about what happened during the civil war.

She has traveled multiple times to Ecuador, where the trials are, and even faced some accused military perpetrators.

“I suffered from both sides in this conflict,” she said. “Nobody has ever been held accountable. We want justice. We will not stop until they are punished and get what they deserve.”