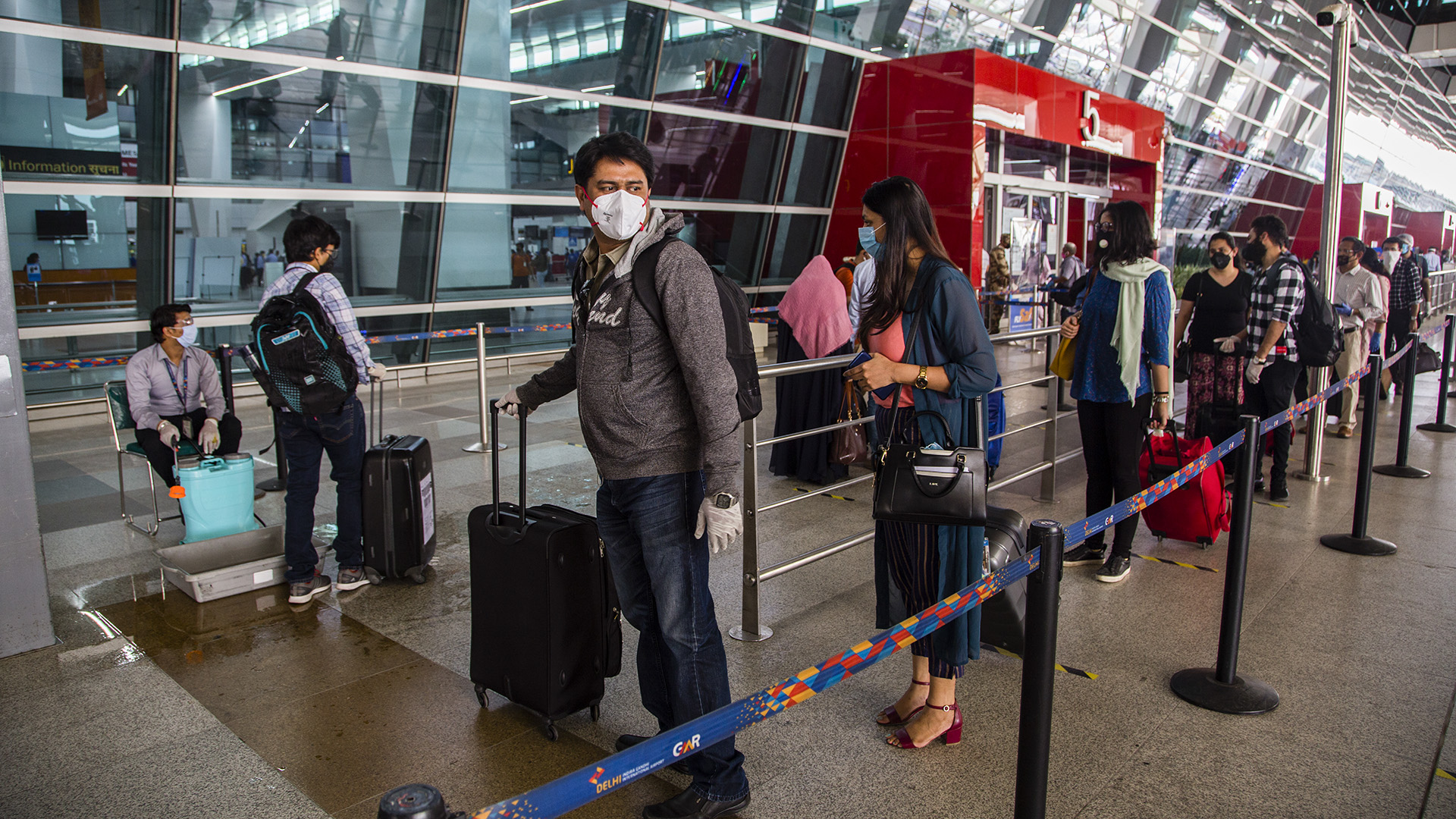 Indian travelers waits in queue to disinfect their luggage at the drop-off point before entering Terminal 3 of the Indira Gandhi International Airport, as the country relaxed its lockdown restriction on May 26, 2020 in Delhi, India. (Yawar Nazir/Getty Images)

NEW DELHI — The Indian government is considering resuming international flights immediately to low-risk cities and countries where Covid-outbreaks are under control.

The Parliamentary Standing Committee on transport, tourism, and culture suggested to re-start the scheduled international flights on Aug. 4.

The committee is advocating for re-starting the scheduled international flights, T.G. Venkatesh, Chairman of Parliamentary Committee for Transport, Tourism, and Culture, said on Aug. 4.

“We have told officials and Ministry (of Tourism) in interactive meetings that we should allow international flights immediately to places wherever Covid cases are low and where there are islands and safe zones. Tourism dept should be restored,” Venkatesh said.

Scheduled international passenger flights were suspended in India on March 23, 2020, due to the Covid-19 pandemic. India’s aviation watchdog Directorate General of Civil Aviation, has since extended the ban several times.

“The ban on international commercial flights to and from India was ending on July 31. The ban has now been extended till Aug. 31,” the aviation regulator said earlier in a statement.

Further, the Parliamentary Standing Committee on transport, tourism, and culture stressed the importance of proper road connectivity to the hilly terrains of the country like Jammu and Kashmir and northeastern states. The committee also emphasized that the connectivity of roads, rail, and air boosts tourism and is crucial to generating money.

“Any tourist destinations play an important role in determining the tourism potentials of that particular site,” the committee report said.

“Since most of the tourist sites in India, especially those located in the hilly regions of Jammu and Kashmir, Uttarakhand, northeastern states does (sic) not have proper rail, air connectivity, therefore, connectivity through road is the only means of connectivity to such tourist sites,”

The Vande Bharat mercy flights began operating in May to repatriate stranded Indians overseas. Over two million people have been flown back in on 15,000 flights in the evacuation program that was initially serviced by India’s flag carrier Air India before other airlines were allowed in.

The Air Bubble pacts are a bilateral arrangement between India and 27 countries so far to ease international travel back and forth.

Even as domestic flights resumed operations in May, the Indian airspace has yet to see commercial international travel that the aviation authority has paused multiple times.

Meanwhile, among five other countries, India has been taken off the United Arab Emirates’ banned travel destination list effective from Aug. 5. The United Kingdom has eased travel restrictions for India, moving it from “red” to “amber” list, which won’t require fully vaccinated Indian arrivals in the United Kingdom to quarantine in a hotel for 10 days.