The state Chief Minister is continuously monitoring the flood-affected areas. 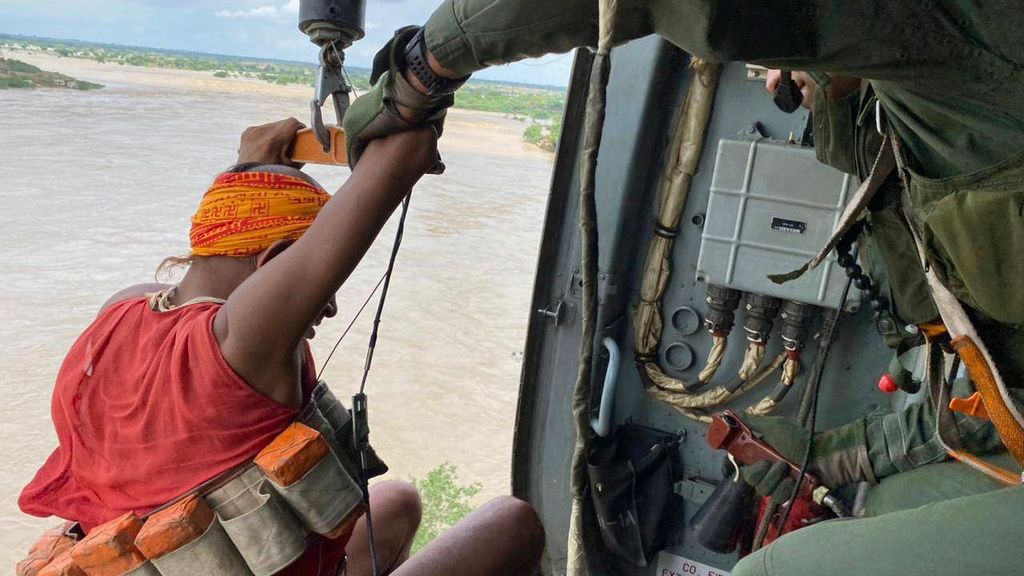 NEW DELHI — Seven people stranded in the middle of a flood were air-evacuated off the roof of a temple in Datia district of Madhya Pradesh on Aug. 4, after an overflowing Sind river left tens of civilians across four districts waiting for rescue.

By the end of the day, a total of 46 people were evacuated.

The Indian Air Force on Aug. 5 informed that 37 people from Narwar and Sunari areas were airlifted as a part of flood relief operations in Madhya Pradesh’s Shivpuri and Datia district.

“As part of flood relief operations in the districts of Shivpuri and Datia in MP, IAF helicopters airlifted 37 people from Narwar and Sunari areas to safer locations. The HADR ops will continue through the day,” Indian Air Force said.

Chouhan took stock of the flood-affected areas in the state on Aug. 5 and later held a meeting with senior officials to discuss the flood situation.

“Half a quintal ration will be given to the families affected by the floods immediately,” he said in a tweet.

During the meeting, he directed the concerned officials to restore the power supply and ensure food supply to flood victims.

“I have directed the concerned authorities to ensure the food supply for flood victims, prompt power supply, to make appropriate arrangements to prevent diseases, to improve the communication system and to make alternative arrangements in place of broken bridges,” said Singh.

“The administration should provide proper arrangements in the relief camps. Many people’s houses have been destroyed and washed away by the floods. They are in deep trouble in the rain. Therefore, instructions have been given to make alternative arrangements for them with priority.”

The Chief Minister is continuously monitoring the flood-affected areas. Information about the rescue operation and instructions are being given to rescue people, send them to relief camps, arrange food, clothes, etc.

The Indian Meteorological Department has forecast heavy rains for western Madhya Pradesh and adjoining parts of Rajasthan for five days until Aug. 9.

«Previous Post
Ram Temple To Open For Devotees From December 2023»Next Post
Learning Foreign Languages Can Enhance Processing Of Music In The Brain: Study