Strong growth seen for vegetable-oil based fuel in face of soaring demand. 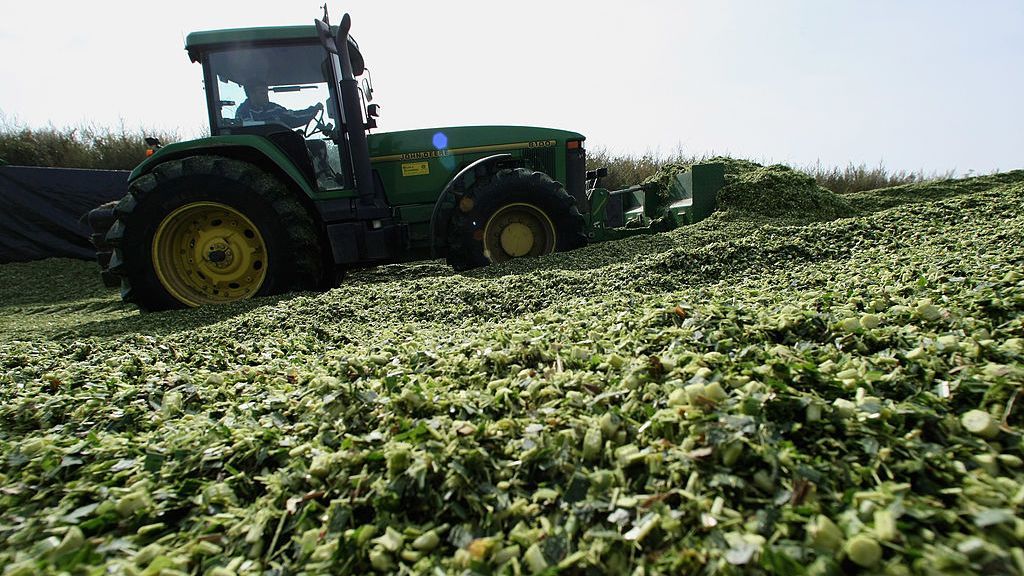 A tractor moves hackled corn plants at a bioenergy plant near Darmstadt, Germany. Interest in bioenergy as a means to cut greenhouse gas emissions continues to grow. (Photo by Ralph Orlowski/Getty Images)

A product of vegetable oil, renewable diesel fuel production in the U.S. is set to grow as fast as Iowa corn.

But behind the strong growth projection for the biofuel is a brewing fight between everyone from bakers to oil refiners to farmers, as lawmakers and regulators consider how to integrate biofuels like biodiesel and ethanol into the drive to slash emissions from fossil fuels.

The U.S. Energy Information Administration released data on July 29 that forecasts huge increases in production capacity for U.S. renewable diesel production, with several production projects currently under construction and more on the drawing board.

Despite such predictions, biofuels haven’t gained much prominence in congressional negotiations over proposed infrastructure legislation, leading some advocates — mainly from corn-producing “farm belt” states like Iowa, Nebraska and South Dakota — to press President Joe Biden on giving the biofuel more prominence in his agenda. While Biden has made going green a key element of that agenda, farm belt lawmakers from both sides of the aisle are unhappy at the small role biofuels are playing in the plan thus far.

“Unfortunately, the promise of homegrown biofuels and our agriculture sector appear to be woefully underrepresented in your administration’s energy, environmental, and transportation agenda,” nine Republican senators from Nebraska, Iowa, South Dakota, Missouri and Kansas wrote to Biden on July 28, seeking to meet with him to promote a bigger role for biofuels in his environmental agenda.

Biodiesel is an alternative fuel produced from vegetable oils, greases, used cooking oils, animal fats and other materials derived from plants or crops. The administration describes biodiesel as a renewable fuel that is chemically the same as petroleum diesel. Because it has lower carbon emissions, biofuels like biodiesel and ethanol are often blended with petroleum fuels.

Thanks to California legislation that requires steep drops in the carbon intensity of fuels, growth of biofuels are forecast to soar. Renewable diesel projects under construction stand to grow the U.S. production capacity by four times in just three years, while another slate of proposed projects that, if built, would propel U.S. production from just 0.6 billion gallons a year in 2020 to 5.1 billion gallons by 2024, according to the Energy Information Administration’s data.

California’s aforementioned Low Carbon Fuel Standard requires a 20 percent statewide reduction in the carbon intensity of fuels, which has prompted many fuel sellers to increase use of biofuels to meet the goal. California uses nearly all the U.S.-produced and imported renewable diesel, the administration reported.

The California law has led to an influx of demand for renewable diesel, said Bill Lapp, founder and president, Advanced Economic Solutions, a management consultant firm specializing in food commodities, on a June 2 podcast produced by the American Bakers Association.

“We have strong demand for vegetable oil around the world, but the key catalyst is the new capacity to produce renewable diesel,” Lapp said of strains on bakers’ supply chains. “Everything has to do with California’s thirst for a way to reduce greenhouse emissions. They have tremendous tax incentives to purchase fats and oils. It has led to a steady increase in the price of vegetable oils over the past year.”

In the short term, all eyes are on an anticipated upcoming Environmental Protection Agency ruling on the so-called Renewable Fuel Standard that will set quotas for such fuels, including biodiesel, said Rasma Zvaners, vice president of regulatory and technical services at the American Bakers Association. The agency’s ruling, which is regularly announced each year, was delayed in 2020 due to the pandemic and new quotas for upcoming years have so far not been announced for review, she said.

Federal environmental regulators “need to consider the diversions of the feedstocks that we’re seeing,” Zvaners said on the podcast, adding that the regulations, along with increased demand by China, are making things “more complicated” for the baking industry supply chain.

In the meantime, battles over spending and mandates on biofuels are set to heat up in Congress.

When biofuels lacked significant investments in a $1 trillion infrastructure bill being debated in the Senate Iowa Democratic Rep. Cindy Axne said it was “unacceptable,” adding she wasn’t likely to vote for the package in the House of Representatives if it didn’t include a “pathway for critical investments in our biofuels sector.”

One group of senators wants to end the mandate that part of the Environmental Protection Agency’s renewable fuel standard be met with corn ethanol, which they said has failed to produce benefits and is costly for refineries to blend with gasoline. The senators advocated turning towards more advanced biofuels and biodiesel to meet the renewable fuel standard.

Oil refineries, particularly smaller ones, have said the fuel standards mandate posed unreasonable costs and they cheered in June when the U.S. Supreme Court ruled in favor of an exemption for small refineries from the rule.

Following that ruling, the American Fuel & Petrochemical Manufacturers said it “hopes that EPA now moves expeditiously to provide critical relief to those small refineries that have demonstrated disproportionate economic harm” from the renewable fuel standard.

“Compliance costs hit all-time highs this month, nearing 25 cents per gallon. The program is hurting consumers and jeopardizing the viability of refineries across the country, as well as the jobs and communities they support,” said the trade group’s president and CEO Chet Thompson in a statement.

Meanwhile, a bipartisan group of U.S. senators introduced legislation that would let gas stations sell so-called E-15 ethanol-blended gasoline year-round, after a federal appeals court struck down an 2019 Environmental Protection Agency ruling that limited sales of the ethanol blend in the summer.