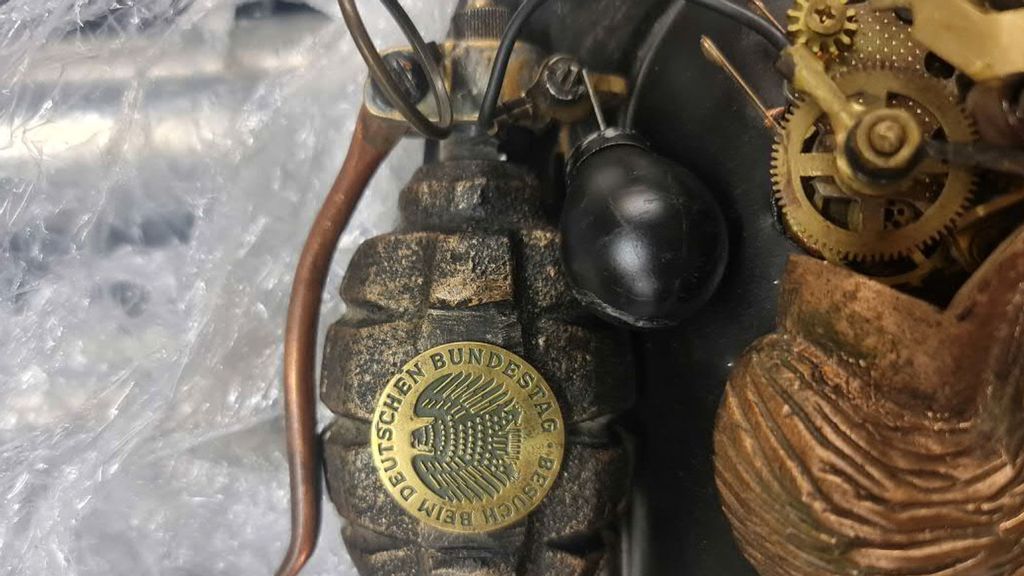 A metal sculpture in the “steampunk” style included this fake hand grenade; a United Airlines flight to Washington, D.C. sat on the tarmac in Frankfurt, Germany after airport screeners alerted police to the artwork in a checked bag. (Bundespolizeidirektion Flughafen Frankfurt am Main/Zenger)

A metal sculpture packed in a checked suitcase sparked a bomb scare at Germany’s biggest airport after inspectors mistook part of a visual design for a live hand grenade.

United flight 814 was headed from Frankfurt am Main to Washington Dulles International Airport near the U.S. capital. As passengers strapped in for nine hours in the sky, an airport security employee spotted something in a computer scan of luggage that was already in the belly of the Boeing 767.

What caught the inspector’s attention was a steel and brass steampunk sculpture that included gears, chains, metal tubes and industrial goggles — and the casing of a hand grenade. The non-functioning explosive featured a badge given to visitors to the German parliament building during the Cold War.

An airport security employee spotted the outline of a grenade at 5:15 p.m. on Aug. 3, according to the German Federal Police directorate at Frankfurt Airport. Data from FlightRadar24.com shows that the United flight backed away from the jetway at 5:20 and reached the end of a runway before air traffic control ordered the pilot to detour to a holding area.

Police said a 56-year-old American man checked the bag in which the sculpture was found. The passenger, who was not identified, was on board during an 85-minute delay and wasn’t aware he had caused it.

While the sculpture’s hand-grenade detail was authentic, police said, it never posed any danger since it had been rendered harmless before its casing was used in the artwork.

Federal police called their bomb-disposal team anyway, ready to defuse what looked like the real thing.

The flight made up a half-hour in the air but still landed late in Washington. The sculpture’s owner was permitted to fly, but federal police said in a press release that they seized his sculpture and his suitcase for investigation.

United Airlines said in a statement only that flight 815 on August 3 “was delayed following a request by local law enforcement.”

Steampunk fashion and artwork are part of a retro-looking science fiction genre that features aesthetics inspired by 19th-century steam-powered machinery.

Examples of steampunk invading pop culture include visual elements from the graphic novel and film The League of Extraordinary Gentlemen and high-impact (but low-tech) gadgets seen in the SyFy series Warehouse 13.