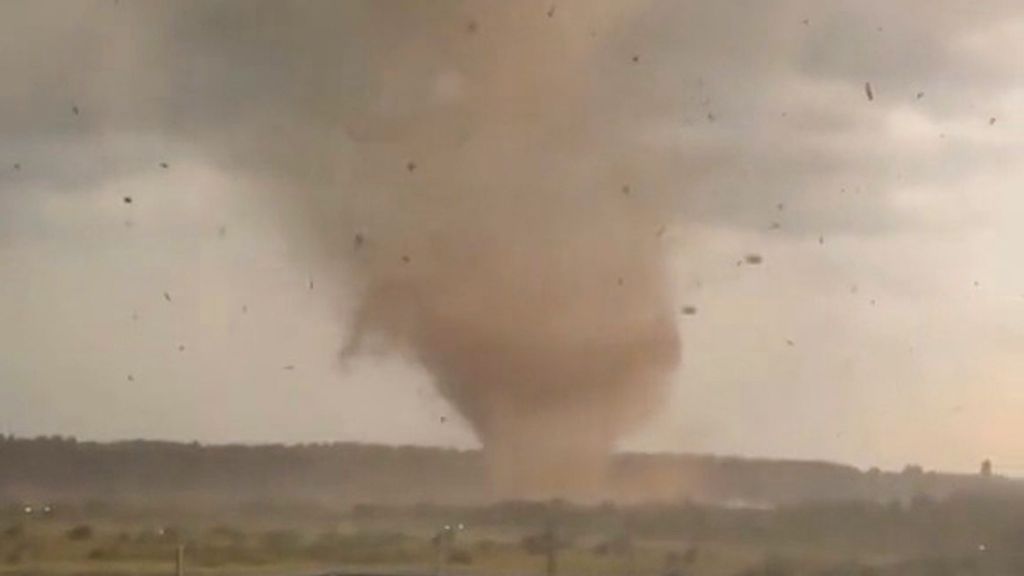 A strong tornado hit Andreapol, in the Tver region of Russia, causing a loss of three lives and widespread property damage. (@gans_g9/Newsflash)

A dark, deadly tornado twisted its way across a Russian town, reportedly killing three people, injuring at least another eight and destroying about 1,500 homes.

The tornado was filmed by frightened locals in the town of Andreapol, Russia, on August 2.

The local authorities said the twister destroyed everything in its path, before eventually dissipating. It was not immediately known how long the tornado was on the ground.

Instagram user “Gans_g9” shared a video of the tornado making its way across a field and sending debris high into the air.

The 30-second video captures the tornado in a field, passing houses and cars in the foreground. Almost at the video’s end, heavy rainfall suddenly begins to fall on the nearby properties and the tornado moves away.

Before the tornado hit the area, the Ministry of Emergency Situations issued a warning to “stay at home” as the “worst of the weather will arrive in the next two or three hours.”

Meteorologist Alexey Safonov warned that similar phenomena could well become more frequent during the rest of the summer.

”In different regions, rain of varying intensity has been observed. Even the wind was strong everywhere and at certain times there were gusts of 12 to 15 meters (39 to 49 feet) per second,” he said.

Reports said the town is still reeling from the deadly storm, with many social-media users commenting they could not believe such a weather phenomenon happened.

Emergency services are now working to clear the damage by the storm wake.

Even though supercell storms are responsible for the biggest and deadliest twisters, a significant number of tornadoes also form under non-supercell clouds and storms.

Tornadoes that originate from a supercell thunderstorm are the most common, and often the most dangerous, according to The National Severe Storms Laboratory. A rotating updraft is necessary to development the supercell variety. Once the updraft begins to rotate, fed by warm air flowing up from the ground, the tornado takes its deadly shape.

Non-supercell tornadoes are typically short-lived and weak, but from time to time can become strong enough to damage properties and cause fatal accidents.

The intensity of a tornado is often measured in terms of the Enhanced Fujita Scale, with the least powerful being listed as F0, with wind speeds of 45-78 mph, and the strongest at F5, with winds of 262-317 mph. However, the EF scale reading for the Russian twister was not available.