His “Dragon” car shoots fire from its headlights. 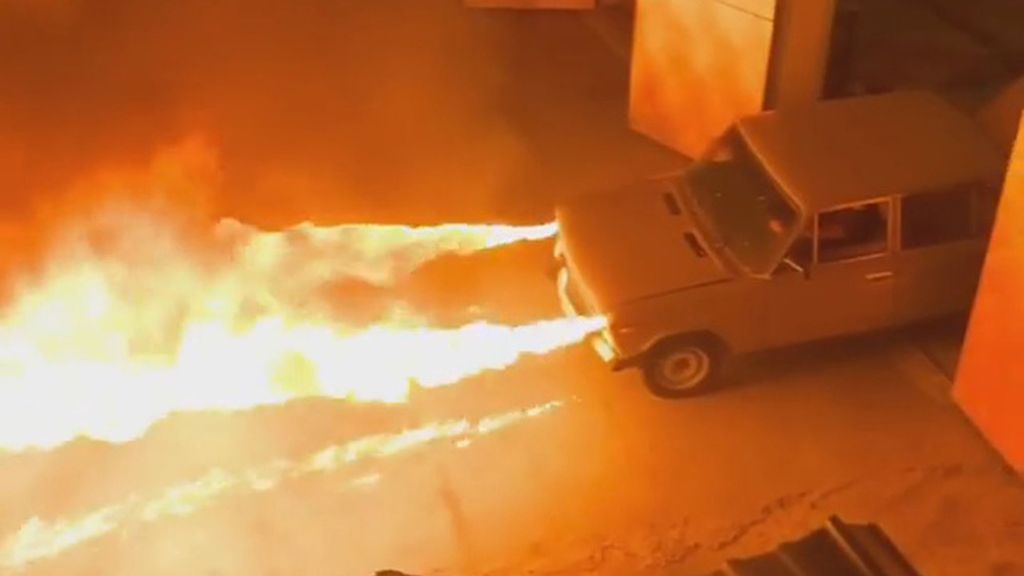 A Russian mechanic is turning heads with his design that converts an old Soviet-era sedan into a road-ready flame-thrower.

Vahan Mikaelyan calls it his “Dragon” and claims it is the first ordinary production car in the world that can spew fire in a forward direction.

Video footage shows powerful flame-jets shooting from two of the car’s four headlights and hitting a brick wall about 25 feet away as the car sits in a garage’s doorway.

“Prigotov’sya!” a voice shouts from off-camera. Get ready! And then the inferno erupts.

Mikaelyan, from Krasnodar, said the vehicle will be used to burn a competing car in an upcoming race.

“Friends, you have seen the powerful fire my Dragon spits. Therefore, on 15th August we will burn the losing car with the Dragon. Make your cars better! There is going to be a hot car battle,” he said, according to an English translation of remarks he posted on social media.

Mikaelyan published a few seconds of video on Reddit.  Zenger obtained the rest of his test footage, showing flaming jets near the outer headlight bezels shooting out fire.

His engineering retrofit is not shown in the video, but it’s not quiet.

It’s unclear whether the car modification complies with Russian law, but similar devices have been legal for at least six years in another country: South Africa has allowed a company to market flame-throwing jets for installation on the sides of vehicles to deter carjackers.

South African government video distributed to media outlets in 2015 shows mannequins on fire after fuel jets spray burning gasoline from under a car’s door on the driver’s side.

“Dragon” is not the first car Mikaelyan has customized. He built a monster truck with giant wagon wheels, and a car that looks like a spider as it travels roads on eight legs.

Mikaelyan’s project used an old VAZ-2106 Zhiguli, known outside Russia and Ukraine as the Lada 1600 after its introduction in the early 1970s. It was a mainstay of the Soviet Union during the Cold War and remained in production for more than 30 years.

The Lada’s manufacturer, AvtoVAZ, rebranded all of its products “Lada” in 2004. It became a Groupe Renault brand in 2017.

The automaker’s line now includes the off-road SUV Niva Bronto. While the company is taking orders for the vehicle at its 300-plus dealerships across Russia, it will not be exported to markets outside of the country.