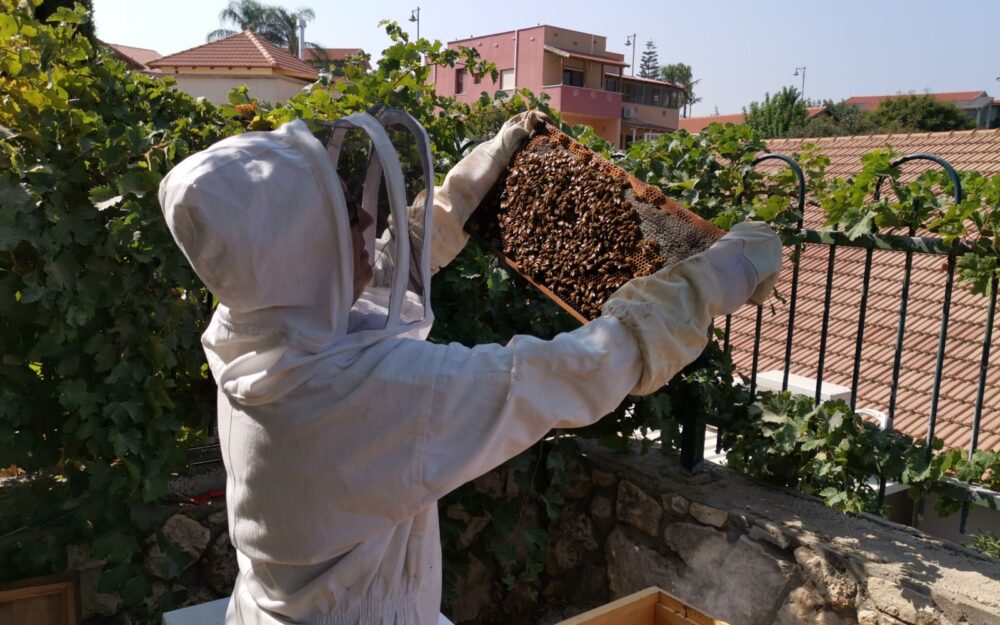 When Miri Newcome and Chaya Ben-Baruch met while working at the English-language library in the northern Israeli city of Safed (Tzfat), little did they know that they would make each other’s dreams come true.

Newcome had always wanted to be a beekeeper, while Ben-Baruch was looking for meaningful employment for her children with Down syndrome.

Fast forward a few years, and the two U.S.-born friends found themselves at the helm of Neshikha (from the Hebrew for “kiss”), a small business manufacturing organic honey and beeswax products.

“One of the things that is possibly unique about our friendship is that we actually talk about things and then implement them. We don’t just talk about it. We have a list,” said Newcome. “Chaya and I shared our list and said, ‘We can do that’ or ‘I can help you with that,’ or ‘Here are things that we can do together.’

“I had always wanted to keep bees, and I was never in a place permanent enough to undertake it,” she said. “I said ‘Now is the time, I’m going to start learning about it. My thought behind wanting to be a beekeeper was not about wanting to have honey but understanding that bees are in trouble and see what I can do to help the bees.”

Newcome embarked on beekeeping studies in Israel. At first, she and Ben-Baruch only planned on producing 100 organic lip balms, but one thing led to another and the two now have an extensive range of products.

The company aims to raise awareness for the importance of bees, naturally, but also for the potential of people with special needs like Ben-Baruch’s daughters.

Together with other people with special needs, Keren and Shalhevet Ben-Baruch contribute to the manufacturing process by pouring the hot beeswax into molds, or sticking on labels designed to make it possible for them to participate in the implementation process. They also contribute their input on the scents, products and packaging.

The beeswax for all the products is sourced from Newcome’s bees, and as such the business is boutique.

“We have a limited amount of honey, because Miri only has X amount of bees that she takes care of,” Ben-Baruch said. “Miri basically has a relationship with her bees. She takes a personal interest in making sure that they’re as happy as she can make them. She doesn’t mass produce them; each hive has its own unique personality.”

The resulting honey and beeswax go toward Neshikha’s organic honey, beeswax candles, ecological beeswax wrap, gift baskets and lip balms. The latter were decided upon after an extensive R&D process that involved 23 different iterations to reach the right formula.

“People who try it don’t want to use anything else,” Newcome said, noting that “We are really, really picky; we know the sources of all of our ingredients.”

For now, the Neshikha products are available only online, but the partners — together with Newcome’s husband, Dave Bender — hope to make Neshikha a household name.

They also plan on developing urban hives and accompanying education and tourist programs, as well as becoming a scalable and reproduceable model for inclusivity in the workplace.

“Let’s employ special needs people but let’s not employ them only because they’re special needs, but because they need to have this ownership and stake in what’s going on,” Newcome said. “To have them intrinsically involved in whatever ways they are capable so they can grow that way — and using that as a model to show others. It’s doable and sustainable.”

“We’re also starting to educate people about the bee,” Ben-Baruch said. “A lot of people don’t understand that if you kill off bees, then you’re not going to have fruits and vegetables and flowers.”

Two Friends Use Bees To Spread A Message Of Inclusivity appeared first on Israel21C.