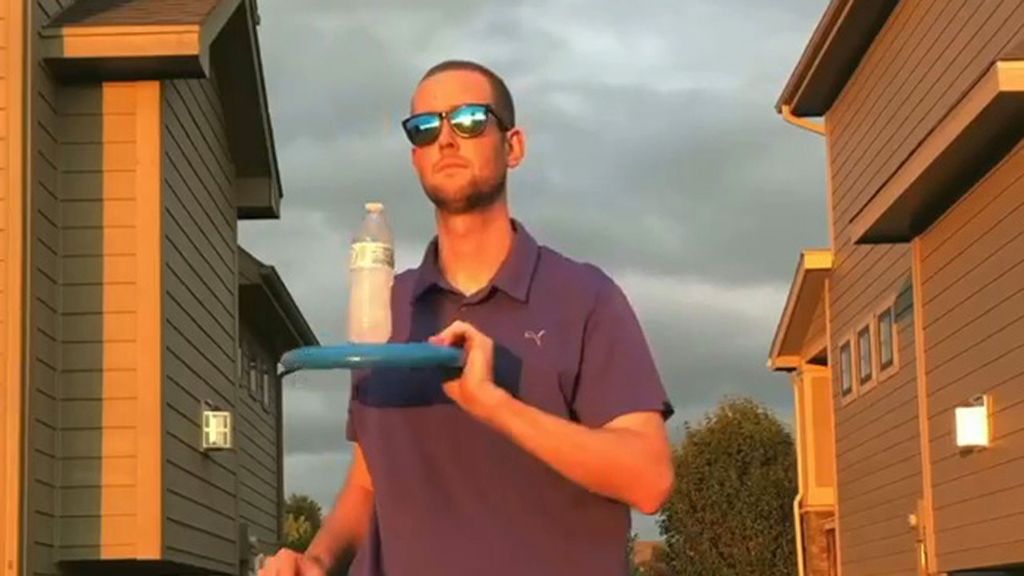 Michael Shields is a trick-shot TikToker in Des Moines, Iowa, who creates challenges that seem to be impossible. (Courtesy of @thatll.work)

The seemingly impossible trick shots performed by Michael Shields of Des Moines Iowa, are racking up millions of views for their ingenuity.

“I have always enjoyed sports, especially those that require hand-eye coordination,” said Shields, who boasts 3 million followers on TikTok. “I have also always enjoyed video creation and editing. Trick shots is where those two naturally met for me.”

Shields regularly updates his social media pages with his new and surprising challenges.

“I love creating trick shots that have never been done before. This can be a very long process brainstorming, creating, setting up, actually hitting the shot, then editing. In total, I spend an average of six hours on each shot. Some I make faster, and others take much longer,” he said.

Shields, who works in finance, got into performing trick shots in April last year after watching other trick-shot artists.

“Half of what I do are original ideas, and the other half of what I do are inspired by other trick shot artists. Dude Perfect was the first group that inspired me to combine my passion for sports with a passion for video creation. Now I collaborate with other trick shot artists on TikTok to bounce ideas off each other and encourage each other,” he said.

Despite being interested in video editing, Shields denied manipulating his recordings. “I do not use any special effects for my videos. It would probably save me a lot of time, but it’s pretty easy to tell when a trick shot video is fake,” he said.

“There are a lot of people who still think it’s fake, but I typically just ignore them. If someone is genuinely curious I will respond and let them know it’s 100 percent real. If it’s not real, it’s not worth watching in my opinion.”

His posts quickly started amassing huge numbers of views after being shared by Internet fans and news portals, helping to make some of his videos go viral.

His videos have a total of 47.4 million likes at the time of writing. Shields is supporting the nonprofit No Kid Hungry through TikTok. So far, he’s raised $410.25 through his own donation and with the help of his followers.

Fans appear to be just as entertained by Shields’ reactions to the shots, with one writing, “I watch these more for his reactions than the shot itself.”