“Tornado” piled on the pounds in lockdown. Now his owners' dog is helping him get back in shape.
By Arian Movileanu August 3, 2021
Facebook
Twitter
Linkedin
Email 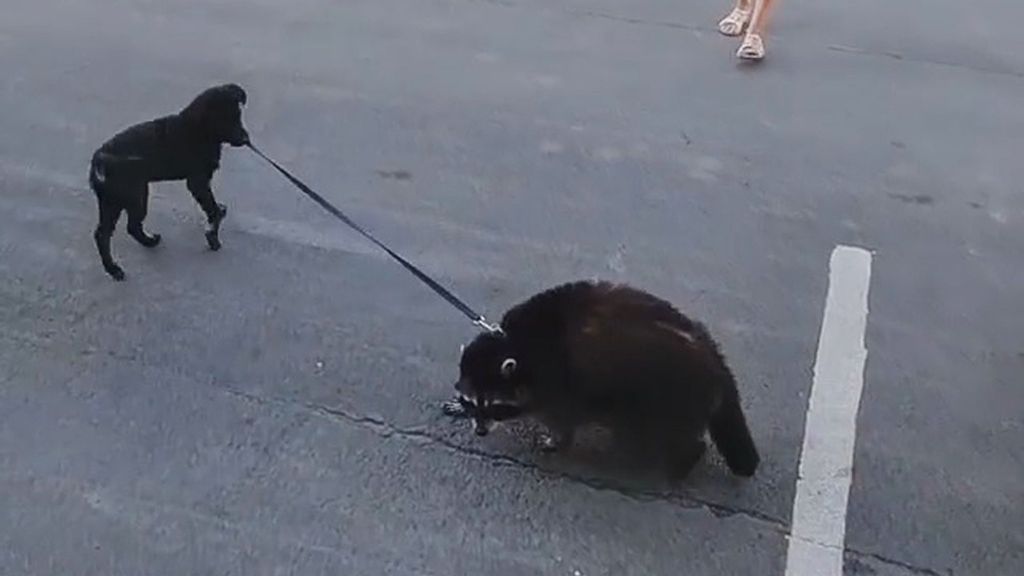 A Russian family's dog walks their pet raccoon, Tornado, who has become a star on Instagram. (Courtesy of @raccoon_tornado)

An overweight raccoon is put through its paces by his new personal trainer: the family dog.

The 3-year-old raccoon, named Tornado, boasts 39,300 Instagram followers and lives with his owners Victoria and Alexander Domaratsky at their home in Orsk, Russia.

The couple has recently recruited their dog to help the tubby raccoon shed some pounds, due to a lack of activity during the COVID-19 lockdown.

In the video, the dog exercises Tornado by holding its lead in its mouth and leading the raccoon around.

The couple said the dog also makes sure Tornado does not run off and always picks up his lead when the pooch drops it from its mouth.

“We took [Tornado] in at the age of three weeks and fed him from a bottle like a human child. For us, this is a great journey that we always wanted to experience,” Alexander said.

Alexander said they enjoyed time with their raccoon so much they wanted to share their experience. “We have invested a lot of time and effort to make our raccoon grow socially and feel part of this world.”

He said the raccoon has accepted him and Victoria — and has taken a liking to their friends, who pose for photos and play with him.

Tornado was widely covered by local media when the couple first got him in 2019, and he even appeared on a TV show called “Have You Seen That Video?” The couple later appeared on the show and discussed raising a raccoon.

Local media said zoo experts have praised the couple for the amount of care and consideration they provide Tornado, even if he is now overweight due to overeating and lack of activity.

Before the coronavirus lockdown, Tornado spent a lot of time in the fresh air going for swims in a river, hiking mountains or traveling to nature spots during the warmer seasons.

However, he piled up the pounds when his owners were also trapped indoors, and now the extra walks are helping to get him fit again.

Raccoons can be as big as small dogs. They grow to about 23 to 37 inches and weigh 4 to 23 pounds. Humans should be cautious about approaching them, as they are common carriers of rabies.