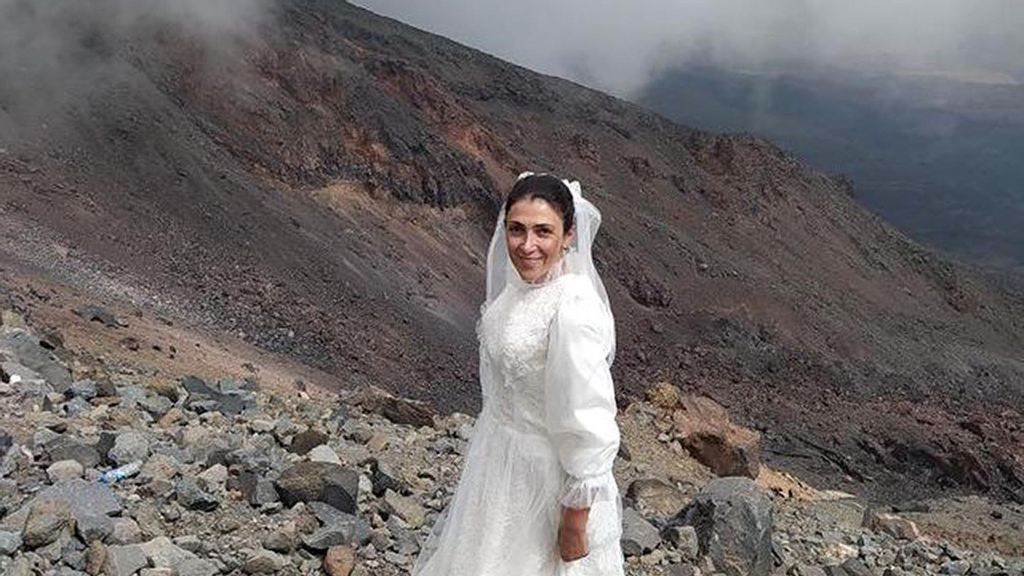 Mountaineer Sevgul Eraslan entered a symbolic ‘marriage’ to Mount Ararat on July 24, 2021, to draw attention to violence against women and children in Turkey. (Courtesy of Sevgul Eraslan)

A Turkish woman has attempted to draw attention to violence against women and children by symbolically ‘marrying’ a famous Biblical mountain, considered the final resting place of Noah’s ark.

Sevgul Eraslan, a 33-year-old art teacher who has been mountaineering for four years, carried out the symbolic ceremony at Mount Ararat in the Turkish province of Agri on July 24.

Mount Ararat is a compound volcano and Turkey’s highest peak at 16,854 feet (5,137 meters). It is mentioned in religious texts, including the Bible, as being the resting place of Noah’s ark after a great flood.

After climbing Mount Ararat with a group of 30 people, Eraslan took her wedding dress from her backpack and wore it when they reached the summit.

Eraslan said her fellow climbers were surprised by the ‘wedding.’

“Only one person knew about my plan among the people who came to Mount Ararat with me. Other mountaineers were very surprised when I wore the wedding dress, and they congratulated me,” she said.

“When I shared the pictures on social media, people actually thought I was getting married to a man,” she said.

But the significance lies in Eraslan’s opposition to violence against Turkish women and children.

Though Turkey was the first country to sign and ratify the Istanbul Convention, which aims to prevent and combat violence against women, the country withdrew from the agreement on March 20. The Turkish government said that enough was already being done with local laws, and it did not need an international charter to strengthen them.

“As a part of society, we are aware of the fact that discrimination against women and various abuses against children are against human rights, that these crimes cause great suffering, not only to individuals who have been subjected to crime, but also to us, and that they cause moral harm to everyone,” said Eraslan.

“For a bright future, I wish that women all over the world are stronger, and all children are safe and unharmed,” she said.

When the incident spread on social media, Eraslan said people had varying opinions.

“Some people thought my idea was good, some found it surprising and clever, however some found it stupid,” she said. “But they saw it mainly as a symbolic message and praised my courage.”