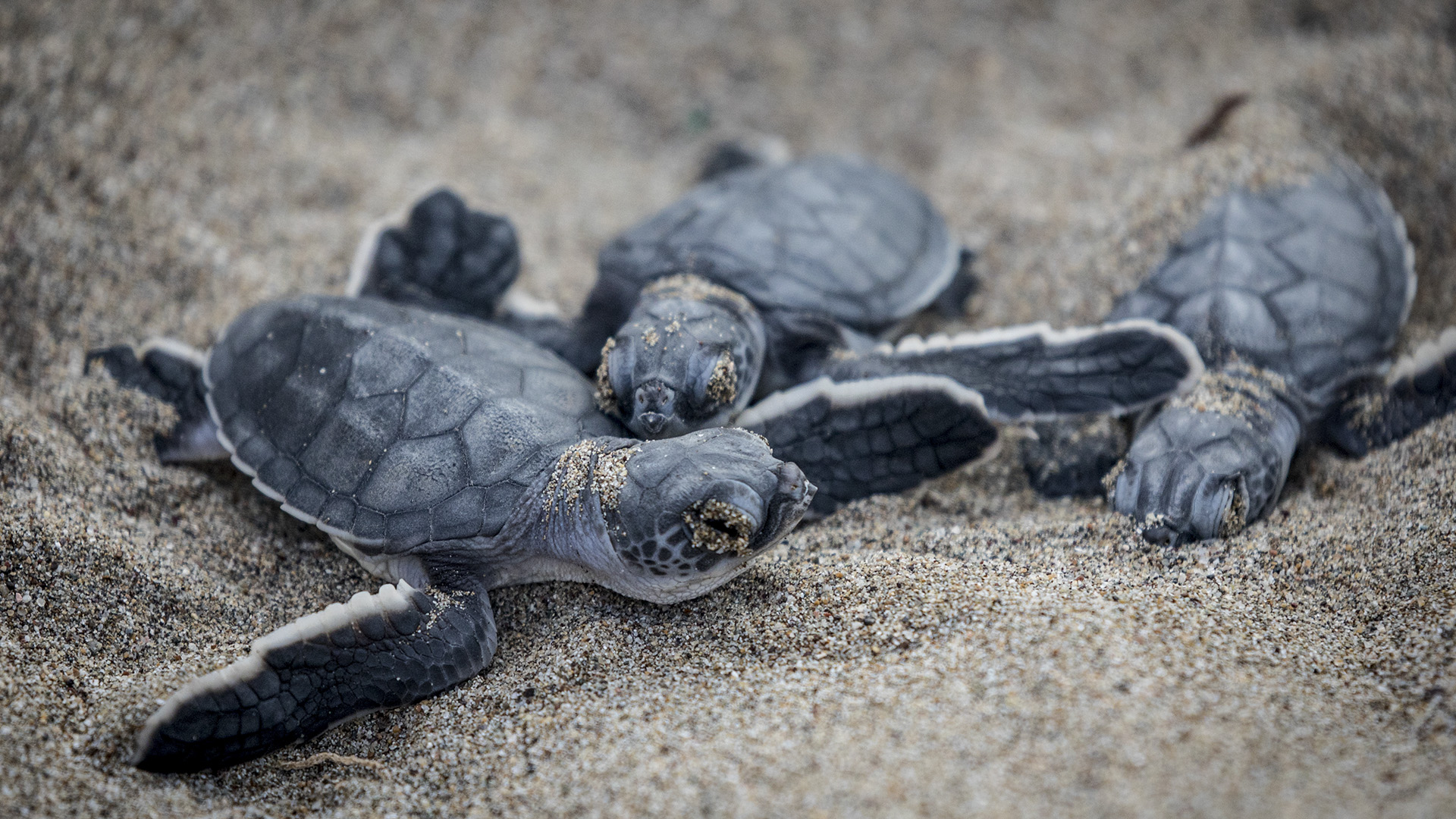 Baby green sea turtles are collected from the surface of a nest after failing to make it to the sea after hatching the night before at Acyatan Beach on August 24, 2018 in Adana, Turkey. (Chris McGrath/Getty Images)

Small juvenile marine turtles from the Indian Ocean and the Pacific Ocean have a very high incidence of plastic ingestion, as per the researchers at the University of Exeter.

The study was published in the journal Frontiers in Marine Science.

Plastic pollution has become one of the most pressing threats to marine wildlife. It is estimated that more than 700 marine species, from blue whales to small barnacles, have had interactions with plastics in the oceans.

Plastics now make up 80 percent of all marine debris and can be found everywhere, from surface waters to deep-sea sediments. Plastics in the oceans come in the form of macro-plastics and micro-plastics.

Plastic ingestion and entanglement (which can cause suffocation) have now been documented for every species of marine turtle. Small juvenile turtles are thought to be most at risk, as this life stage is most prone to entanglement and ingestion due to their feeding preferences, while the oceanic zones they inhabit overlap with areas of high plastic pollution.

“Ingestion of plastic is thought to lead to mortality through laceration, obstruction, or perforation of the gastrointestinal tract. It is also suspected to lead to malnutrition and chemical contamination,” said one of the researchers.

To get a deeper understanding of how much and what type of plastics are ingested by small juvenile turtles, researchers examined the contents of the stomach, intestines, cloaca, and bladder of stranded or bycaught specimens from the Indian Ocean off Western Australia and the Pacific Ocean off Eastern Australia.

They looked for plastics inside green (36 in the Pacific and 22 in the Indian Ocean), loggerhead (7 and 14), olive ridley (seven in the Pacific), hawksbill (five and two), and flatback turtles (10 and 18).

They classified plastics as per their color and type (for instance, hard plastics, rope, or plastic bags) and identified the sources of plastic polymers found.

No plastic ingestion was found in sampled hawksbill turtles from either ocean, but this might have been due to the small sample size.

The proportion of turtles that had ingested plastic was much higher in the Pacific Ocean than in the Indian Ocean.

From the specimens collected from the Pacific Ocean, green turtles were most likely to contain plastics (83 percent), followed by loggerheads (86 percent), flatbacks (80 percent), and olive ridleys (29 percent).

On the other hand, from the specimens from the Indian Ocean, the flatback turtles contained the most plastics (28 percent), followed by loggerheads (21 percent) and green turtles (9 percent).

The types of plastic also varied between the two study sites.

“Plastic in the Pacific turtles was mostly hard fragments, which could come from a vast range of products used by humans, while Indian Ocean plastics were mostly fibers — possibly from fishing ropes or nets,” said lead author Emily Duncan of the University of Exeter.

An evolutionary trap occurs when a previously adaptive behavior or habitat now has negative effects on overall survival and reproduction.

Post-hatchling turtles have adapted to enter the oceanic zone (for green, loggerhead, hawksbill, and olive ridley turtles) or neritic waters (flatback turtles) where they feed and grow into maturity.

Usually, these habitats are ideal for their development, but the rapid introduction of plastic debris has made them risky for juvenile turtles.

Actions to mitigate and prevent plastic pollution are necessary.

“The polymers most commonly ingested by turtles in both oceans were polyethylene and polypropylene,” said Duncan.

“These polymers are so widely used in plastic products that it’s impossible to pin down the likely sources of the fragments we found, so interventions are needed to stop plastic pollution from land-based sources,” she said.

“The next stage of our research is to find out if and how plastic ingestion affects the health and survival of these turtles. This will require close collaboration with researchers and veterinarians around the world.”