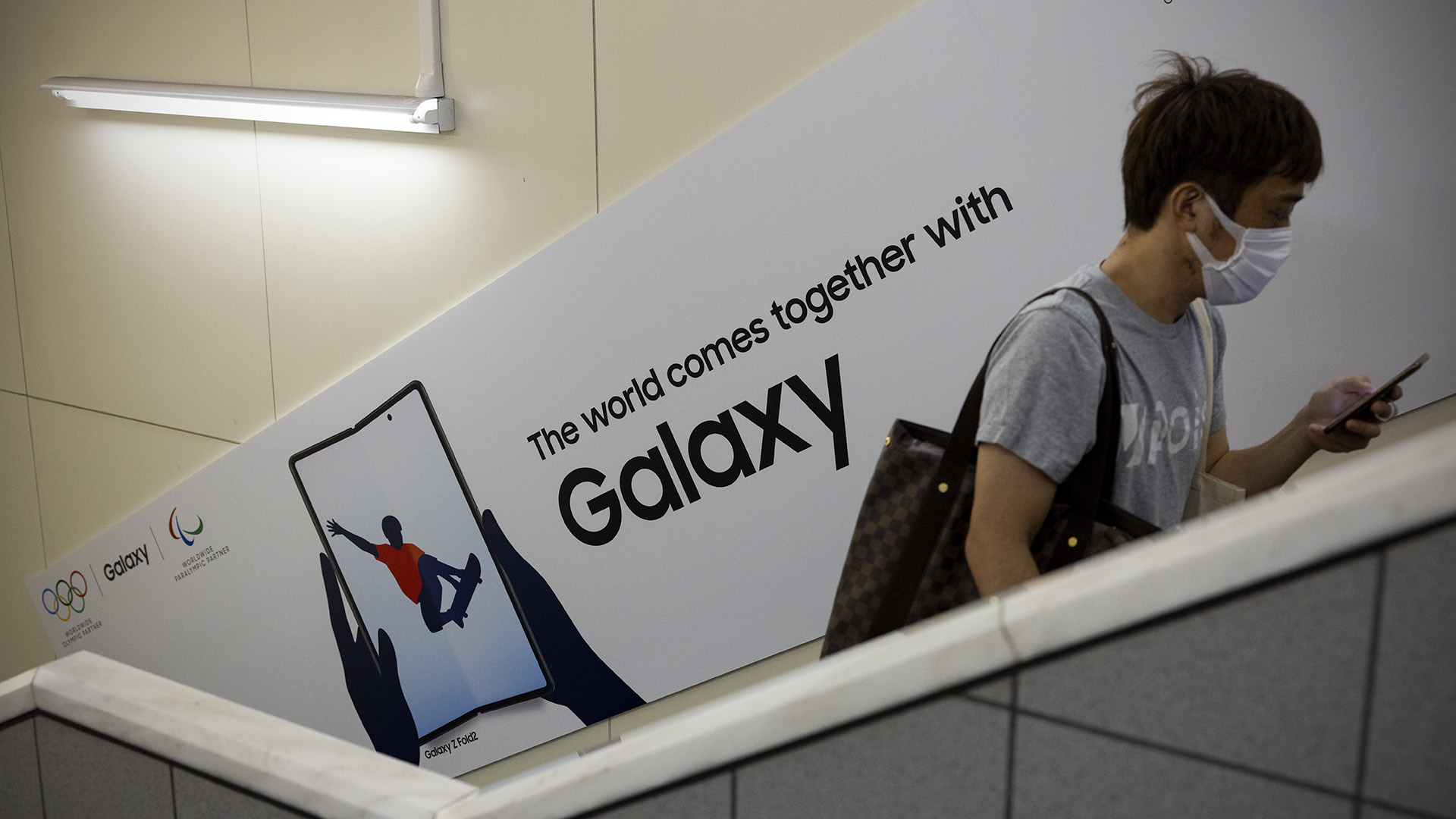 A man passes an Olympics-branded advert for the Samsung Galaxy Z Fold2 that omits mention of the Samsung brand name on July 21, 2021 in Tokyo, Japan. (Carl Court/Getty Images)

SEOUL, South Korea — South Korean multinational conglomerate Samsung Electronics smartphone shipments have been ranked first in the world in the second quarter of this year.

Samsung Electronics recorded 18 percent of total global smartphone shipments in the second quarter, maintaining its No.1 position in the world, as per the survey by global market research firm Counterpoint released on July 29.

Global smartphone shipments declined by 7 percent Quarter on Quarter in Q2 2021, as per the research.

“This was primarily due to ongoing component shortages as well as the implementation or extension of Covid-19 restrictions across Asia and Europe,” the company said in a press release.

“Shipments, however, grew by 19 percent year-on-year as inoculation rates increased in several major economies preventing the need for lockdowns as stringent as those seen in the same quarter of last year.”

However, Samsung Electronics’ shipments in the second quarter (18 percent) slightly decreased from the previous quarter (21.7 percent).

“Samsung Electronics shipped out 57.9 million units in the second quarter,” the company said.

“Xiaomi recorded the highest performance in China, Southeast Asia, and Europe, and ranked second. Xiaomi has increased global shipments in the Indian market, which have been hit by the Covid-19 outbreak, with its premium strategy and low-priced line sales.”

Xiaomi’s share of mid-priced markets such as Southeast Asia and Europe increased.

“While Samsung retained the top spot, its market share fell by over 3 percent to 18 percent in Q2 2021,” said Research Director Tarun Pathak.

“Shipments were down due to weak seasonal demand in some of its key regions such as India, Central, and Latin America and Southeast Asia followed by production disruption in Vietnam due to Covid-19. Xiaomi had its best-ever quarter as it was able to increase its market share in China, Southeast Asia, and Europe.”

Counterpoint said that the global smartphone market decreased 7 percent in the second quarter due to global semiconductor shortage and spread of Covid-19, but sales increased by 35 percent year-on-year to $113 billion (about 129.5658 trillion won).

“However, Xiaomi had a strong quarter in terms of revenue as well, becoming the only brand within the top five to grow its revenue sequentially. It captured its highest-ever revenue share of over 9 percent driven by the strong performance of Redmi Note and the Mi 11 series.”