Riding a three-fight winning streak and feeling great, the 40-year-old is not ready to step away just yet. 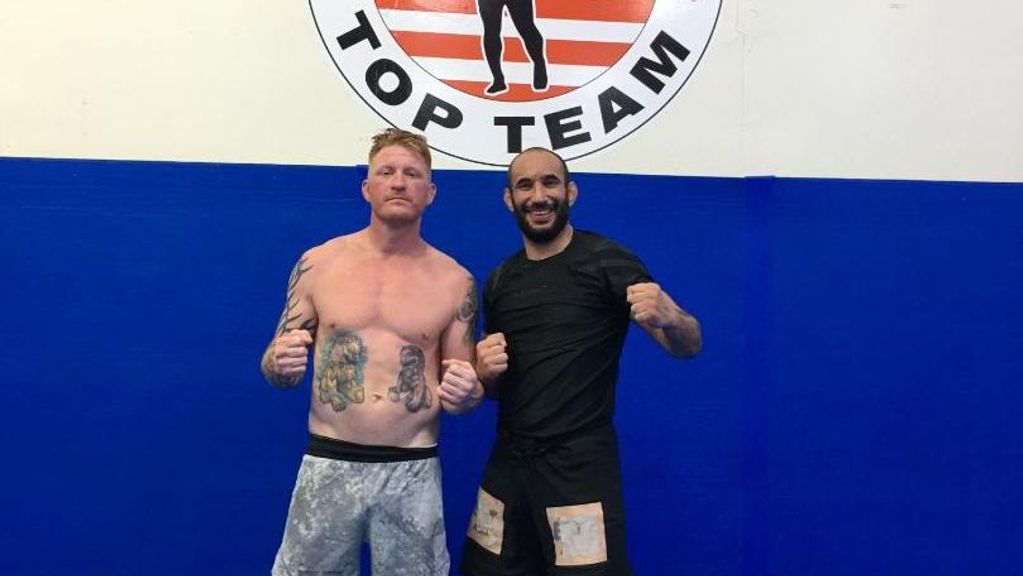 Ed Herman, left, with one of his training partners at his home gym. Herman features in a preliminary bout of UFC 265 Saturday night on pay-per-view. (Courtesy of Ed Herman)

Forty-year-old Ed Herman will enter the UFC’s Octagon for the 28th time on Saturday night, this time in a match against the explosive Alonzo “Atomic” Menifield.

Now competing at light heavyweight, Herman (27–14–0, 1 no contest) has the longest uninterrupted tenure on the UFC’s active roster. He competed as a middleweight for much of his career, but feels fresher than ever now that cutting drastic amounts of weight is a thing of that past.

Herman’s UFC 265 preliminary bout opponent, Menifield (10–2–0), is coming off of a first-round submission of Fabio Cherant in March. Herman, known as “Short Fuse,” hasn’t competed since September 2020. He will be competing in his 41st fight as a mixed martial artist. UFC 265 can be seen live on pay-per-view via the Disney Bundle and ESPN Plus.

Zenger caught up with “Short Fuse” during fight week to discuss his battle plan against Menifield and what his future might hold after the fight.

Zenger: How is everything going, Ed?

Herman: Everything is going really good, man. It sounds a bit cliché, but almost better than ever. I’m feeling amazing at 40 years old.

Zenger: Would you credit that to your ability to continuously evolve with the game, taking good care of your body or a combination of the two?

Herman: Definitely a combination of both and a little of luck on my side.

Zenger: We all need a little of that. You have been in the UFC for a long time. Some of the guys you came in with aren’t even fighting anymore. How different is the game now as opposed to when you started?

Herman: It’s a lot different. Back then, it was kind of tough guys in the sport, and now it’s supreme athletes as well. There’s still tough guys, but the level of athletes that are in our sport now is very high. Guys are making the choice to come over now, to where they could be playing other professional sports and instead are choosing this path.

Zenger: You are coming into UFC 265 on a three-fight winning streak. You have shared the Octagon with a lot of great fighters. Do you feel like the experience gained in those fights are the keys to some of the consistency you’re having right now?

Herman: Yeah, a little bit. I would like to take some of the credit myself by putting in the work, continuing being a student of the game and continuing to try and evolve and get better to compete at this level.

Herman: Well, I gotta say those paychecks are a part of it. I got college to pay for, for three kids. That kind of stuff. I like to be able to walk away from this sport and have some things to show for it. Now the money is better than it was before. Before I was making a living, but that was about it. Now I’m able to start to put some money away for my retirement, make some investments, and like I said, save for college for my kids. With inflation and everything becoming more expensive from real estate to gasoline, it’s hard to walk away from the money sometimes. And I’m still winning. I still feel good and healthy, so if I can do that, why not?

Zenger: Menifield is your opponent on Aug. 7. During one of his recent fights, you said you weren’t impressed by him or his opponent for that particular performance. What do you see in him heading into your matchup with him?

Herman: He’s a stud athlete. He’s very explosive. He looks really strong. He’s definitely a dangerous guy, but I feel my experience and my skill level is higher. I feel I can weather that storm, and I’ll have the opportunity to shut him down with my skills and my durability.

Zenger: It always feels like a pick your poison when someone is fighting against you because we have watched your standup get so much better, and obviously the wrestling has always been there. Stylistically, what type of fight are you expecting from Menifield?

Herman: You know, it’s kind of hard to say. I feel like in a lot of his fights, he’s come out with some big bursts, he likes to control the cage. Put a lot of pressure on guys and keep them pinned against the cage, and step back and flurry. He’s definitely strong enough to get a takedown and I can see him trying to get a takedown, but he’s got a smart coaching staff, and I don’t think that would be a very smart option for him. Especially after my last fight when my energy bar was down to the bottom and I still pulled off a submission.

I’m dangerous on the ground, man. I got legit jiu jitsu for fighting. You’re not going to see me rolling underneath for ankle locks or anything, but if it presented itself there, I’m going to look for it. I’m well-versed on the ground. I feel like he’s in trouble anywhere. I feel like he’s going to be nervous. I’ve got the reach on the outside. But he’s got that explosive power and that speed on me a little bit.

Zenger: Is it concerning to you that he may be a bit sharper, as he fought in March and you haven’t been inside the cage since last September?

Herman: I’ve been in the gym this whole time because I was supposed to fight in May; that got pushed back. I think I was supposed to fight in July, and that got pushed back. I’ve been in the gym all year. It’s not like before, when I was injured and out of the gym for months at a time. But I have trained this entire time. I don’t see any type of ring rust will be a problem for me. I haven’t fought for a little while, but I have still been really active, so I don’t see it being a problem.

Zenger: You have weathered so many storms throughout your career. What has it been like just making it to the cage and crossing your fingers hoping your opponent does the same, with COVID being a thing?

Herman: It’s been a crazy year. Last year I had a fight canceled the day of, and that was really frustrating. I had to get right back into camp right afterwards and get ready for Mike Rodriguez. At 39–40 years old, it’s a lot harder to do that than when you’re a kid. I use that time to recover. The camp is what takes it out of you a lot of the times. It’s been a tough time with COVID. Not only that, but all the separation of family and friends, and all the chaos throughout the world.

In the gym, you don’t see a lot of that. Every race, religion, none of that matters here. We’re all brothers. But I feel like outside of here, the world has become an ugly place right now. We gotta love each other and love our neighbors and get back to being there for people. Hopefully, that can continue to happen, and we can all get along.

Zenger: This will be your 41st fight, and in October you turn 41 years old, so that would seem to be a bit of an omen for you.

Herman: Ah, I didn’t think about that. That’s kind of crazy. I feel really good. Like I said, a little bit of luck and all that stuff we talked about with taking care of myself has gone a long way. I feel good. My first fight at 205, I didn’t cut any weight. I weighed in at 203. But I’ve been able to actually lift weights between camps and put on a little more muscle. That keeps me from getting injured as easy.

When you’re always too lean and constantly cutting weight, I feel like you get injured easier. Building a bit of muscle mass for this camp, I’ve been able to stay healthier that way. It’s the first time in my life that I have lifted weights on a consistent basis, so you’re going to see the biggest, baddest, strongest Ed Herman that you have ever seen, and I’m going to be shredded, too. That’s wassup, man. I’m ready to go. I feel great.

Zenger: Given your longevity, what’s your approach to these fights now?

Herman: I’m definitely not overlooking Alonzo, he’s a very dangerous opponent. I try to take it one fight at a time now. Each time we go back and talk to my coach and talk to my family to make sure my body’s right, my mind is right. I think a lot of it is mental at this point. I know how to fight. I know how to do all this stuff, but being in the right mindset matters. I’ve lost fights in the past before I even stepped in the cage because I wasn’t in the right place mentally. That’s a lot of it. I gotta enjoy these moments. What’s the worst that can happen, it’s already happened.

Zenger: What does Ed Herman have to do to be successful on Saturday night?

I’m up for a contract negotiation after this fight, so I’d love to stick around for a little bit longer. I’m taking it one at a time, but at the same time I think I’ve got another three or four fights in me before I hang them up.

Zenger: Win, lose or draw, you have never disappointed in terms of giving your all. I expect much of the same on Saturday night, and good luck to you.

Herman: It’s good to talk to you again. It’s been a long time, Percy. I want to thank all the fans for sticking by me. I got a lot of support coming into this fight. A lot of people giving me a lot of love, respect and support. I appreciate that from the fans and all my people who got my back. My gym here, American Top Team-Portland, my coaches and teammates, I couldn’t do this without them. You don’t do this by yourself, so also my family, of course.