The photos present a different side of an over-populated country fighting poverty. 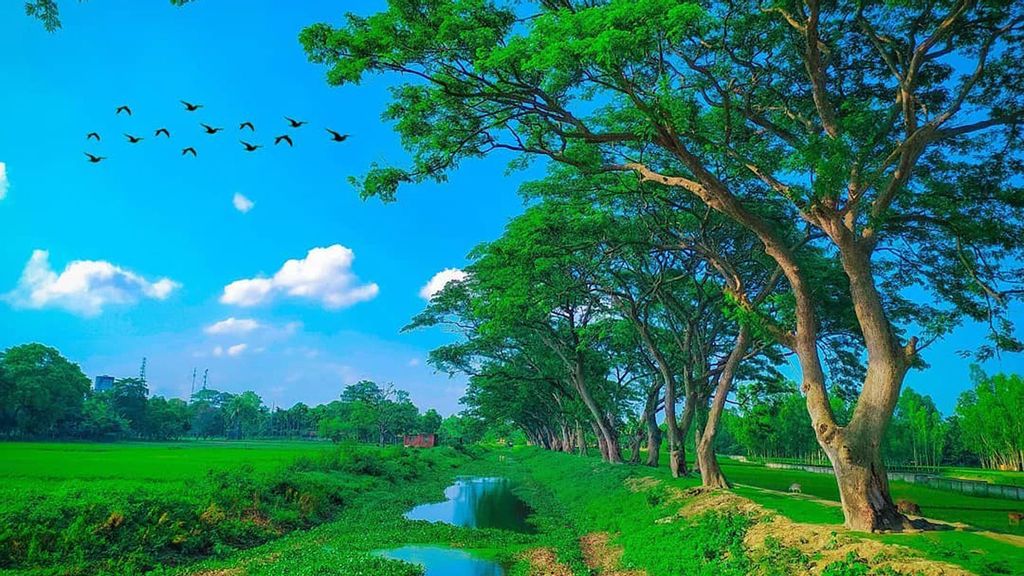 The countryside in Bangladesh, as captured by Sabbir Hossain. He shoots all photos on his phone, rather than a professional camera. (@sabbir_mobigraphy/Zenger News)

RANGPUR, Bangladesh — A Bangladesh photographer has been challenging the images of one of the most populated countries in the world as a dry, arid wasteland by showcasing its rich scenery.

Sabbir Hossain is from Rangpur, a major city in northwestern Bangladesh, and he takes all photographs with his Samsung M21 mobile phone.

The Bangladeshi artist said he sometimes used special effects, such as an ultra-wide lens popular for landscapes, or sunburst — a tool that shapes the sun’s rays in a star-like form.

Hossain said he is not a professional photographer; he captures pictures out of a passion for the country’s wild nature.

Bangladesh is the eighth-most populated country in the world, harboring more than 166 million people.

The South Asian country is also home to beautiful beaches, the largest mangrove forest and the royal Bengal tiger in the Sundarbans area, among other tourist attractions.

“When I look at nature, my eyes glaze over. My mind wanders. I start seeing things as I would see them through a lens. I walk at a slower pace with my eyes locked on the particular scene, strategically placing myself to appreciate my vision from various angles,“ Hossain said.

“Every place has some different beauty. It’s a part of your journey. I try to depict the true beauty of nature.”

Hossain says every Bangladeshi citizen is the country’s ambassador.

“I always try to inspire people from all walks of life. I want to show them the true color of the nature of my country. Those pictures will make foreigners interested in my country, and they will visit my country. And also my photography will inspire the young and create new photographers.”

“It is a land of enormous beauty. There are many beautiful places like the world’s longest natural sea-beach Cox’s Bazar, Kuakata beach, the Tea garden of Sylhet, the Sundorbon, the Mangrove forest on Saint Martin Island, the Chittagong hill tracts, Bandarban [district], Rangamati Kaptai [Kaptai National Park], and many others. These are some places you can go to photograph nature.”

Bangladesh is also the most densely settled rural nation in the world with about 64.81 million people living in urban areas in 2020 while approximately 102 million people were residing in rural areas in 2019, by Statista estimates.

“Bangladesh is full of greenery, as most of the places in my country have rural areas,“ Hossain said.

“Those areas are full of unsophisticated nature and vast agrarian fields with green crops. The trees are bent with green leaves.”

Bangladesh has four different areas of vegetation with the eastern zone home to evergreen hill ranges covered with jungles of bamboo and rattan, the climbing palm.

The central zone contains many lakes and supports swampy vegetation that creates the Madhupur jungles. A large part of the area has been cleared and is now intensively farmed.

The Jamuna River, the lower stream of the Brahmaputra River — which is the major river of Central and South Asia — and the Padma river, the main channel of the Ganges, shaped a plain with cultivated plants and orchards.

The southern zone contains the wetlands of the Sundarbans, a cluster of low-lying islands in the Bay of Bengal. The spot is famous for its distinct mangrove vegetation — shrubs that grow on the saltwater tropical coasts.

Hossain also said deforestation and rapid urbanization — a consequence of the fast-growing population — became an increasingly alarming threat to the South Asian country. “Climate change in Bangladesh is now a critical issue,“ he said.

“People are now cutting trees indiscriminately and making buildings that have ruined the natural beauty. Now the evergreen in Bangladesh is turning into a desert. When I compare my old pictures with the new ones, I see a lot of differences.”

In addition, Bangladesh faces severe economic issues. “Most of the time, our farmers are struggling to produce crops. They use outdated agricultural machines.”

Many farmers, given the economic pressures, sell the land to residential real-estate developers or entrepreneurs to set up factories.

Bangladesh progressed from a lower-income to lower-middle-income country in 2015 and is on track to graduate from the UN’s Least Developed Countries (LDC) list in 2026, according to the international financial institution World Bank Group.

The World Bank findings are now challenged by a recent household survey.

The lower or extreme poverty rate increased from 9.4 percent in 2018 to 28.5 percent in 2020, due to the global pandemic, according to a study conducted by the South Asian Network on Economic Modeling (SANEM), a nonprofit research organization in Bangladesh.

Figures for international tourism showed it dropped by 59.7 percent in 2020, according to a World Travel and Tourism Council report.