Trapped animal was freed and released safely back into the wild. 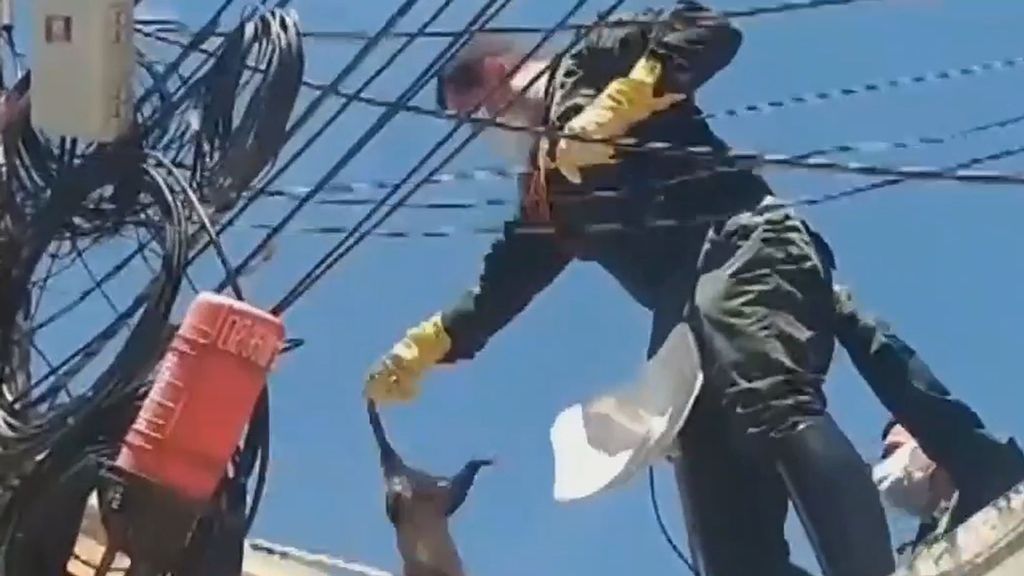 A policeman rescues an opossum trapped in telephone wiring in Narino, Colombia. The animal was released into the wild. (@Policianacionaldeloscolombianos/Zenger)

A Colombian police officer rescued an opossum tangled in phone cables on top of a utility pole in the Narino last week.

Police said the opossum was trapped in the coils of the telephone wires. After climbing the utility pole and freeing the marsupial (pouched mammal), police checked it for injuries and released it into the wild.

In the video, a gloved policeman is seen moving the cables to try and reach the animal caught in the mass of cables at the top of the pole. He eventually puts his hand in, grabs the opossum’s tail and tries to pull it free. A colleague pokes it with a stick.

Eventually the opossum is separated from the cables and it drops toward the ground.

The policeman, still holding the animal’s tail, swings it around to a place of safety.

The National Police of Colombia stated: “… Once it was confirmed to be out of danger, it was released in its natural habitat.”

The animal was reportedly placed in a box in order to be moved to a place where other opossums were known to be located.

In another rescue operation in Australia in 2019, “a possum found with a glass jar stuck over his head in Blaxland [was] released to the same tree [where] he was rescued,” wildlife rescue nonprofit WIRES reported at the time.

Endemic to the Americas, opossums are marsupials of the Didelphimorphia order, the largest order of marsupials in the Western Hemisphere.

Opossums originated in South America. The only species found in the United States and Canada is the Virginia opossum.

Commonly referred to as possums in North America, they are often confused with the tree-dwelling Australasian marsupial of the suborder Phalangeriformes, called possums due to their resemblance to the Didelphimorphia.

Adult opossums found in the wild “weigh from 4-15 pounds and are typically 24-40 inches in length. Opossum weight varies seasonally, and they are typically heavier during fall,” according to the Association of Fish and Wildlife Agencies in New York State. “Adult males are generally larger than adult females and, at the same age, may be twice as large. The fur is coarse, grizzled and generally grayish white, with darker front and hind quarters; however, there is a wide range of color variations. The round, scaly tail of the opossum is prehensile (grasping) and used to assist in climbing.

“Opossum feet are similar in shape to human hands; with an opposable thumb on each hind foot. Opossums may hiss, growl or play dead when threatened.”