Though unable to see, the pilot managed to negotiate an emergency landing in a field.
By Joseph Golder August 2, 2021
Facebook
Twitter
Linkedin
Email 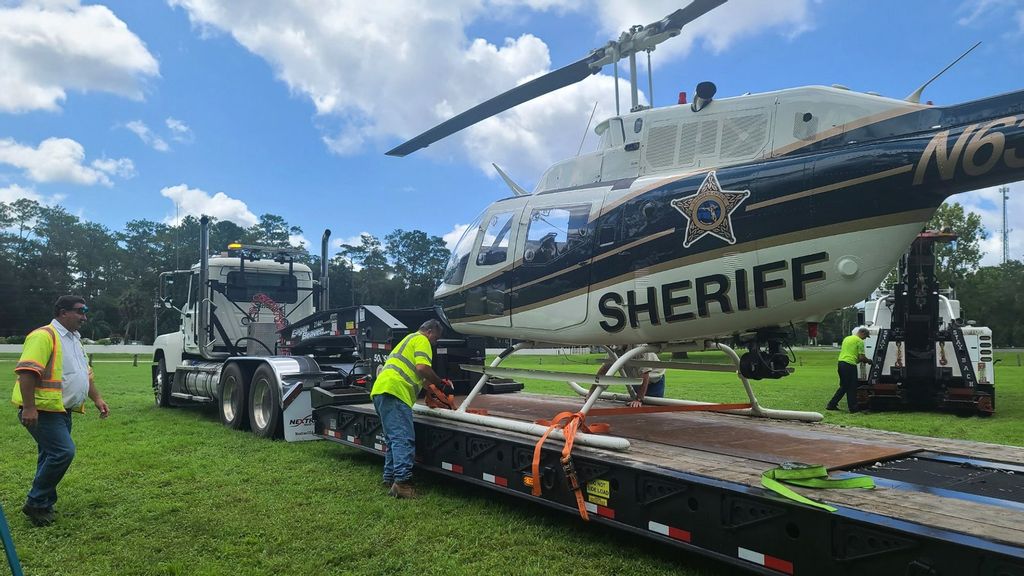 A disabled sheriff's helicopter that safely landed in a field near an elementary school in Florida is loaded onto a trailer to be taken back to a hangar for further evaluation. (Hernando County Sheriff/Zenger News)

A sheriff’s department pilot was able to keep a malfunctioning helicopter in the air long enough to land it in an open field near an elementary school in west-central Florida.

The emergency landing took outside the city of Brooksville at about 10 p.m. on July 29.

The Hernando County Sheriff’s Office’s chopper was in the air to help ground patrols and canine units search for a wanted person. But during the flight, the pilot radioed he had to discontinue the search, due to unspecified “technical issues” with the Bell OH-58 Kiowa helicopter.

Despite that, the chopper crew — tactical flight officer BJ Hart and deputy pilot Roy McLaughlin — decided not to land immediately, as they were in a built-up area. Instead, they looked for a place to land without risking the lives of anyone on the ground.

At one point, the pilot said he could not see, due to his goggles fogging up and then repeated the phrase “can’t see” several times.

The helicopter later landed in a field close to the Brooksville Elementary School.

The crew members were subsequently checked by paramedics at the scene and released. Authorities are investigating what went wrong with the helicopter.

“The aircraft remained on scene overnight,” the sheriff’s department said. “Early [the following] morning, the department’s aviation mechanic and chief pilot responded back to the scene to determine the cause of the malfunction.”

After engineers were apparently unable to repair the chopper where it landed, it was placed in a trailer and taken to the sheriff department’s hangar for further evaluation.

Overall, the number of helicopter-related accidents and fatalities in the U.S. has been on the decrease in recent years, the U.S. Helicopter Safety Team reports.

In a news release from early this year, the team reported the number of fatal civil helicopter accidents in 2020, as compared to a year earlier, dropped by more than 20 percent, while the total accident rate per 100,000 flight hours fell by 2.6 percent.

“Our numbers are improving, but we’re not where we want to be yet,” said Nick Mayhew, industry co-chair of the team. “We know our aircraft are sound and safe, thanks to efforts by manufacturers. The vast majority of accidents result from human error. Therefore, pilots and operators must continue to strengthen our safety programs holistically, improving training programs, safety culture and effective use of technology.”

The U.S. Helicopter Safety Team is a volunteer organization consisting of U.S. government and industry stakeholders formed to improve the safety of civil helicopter operations in the National Airspace System.