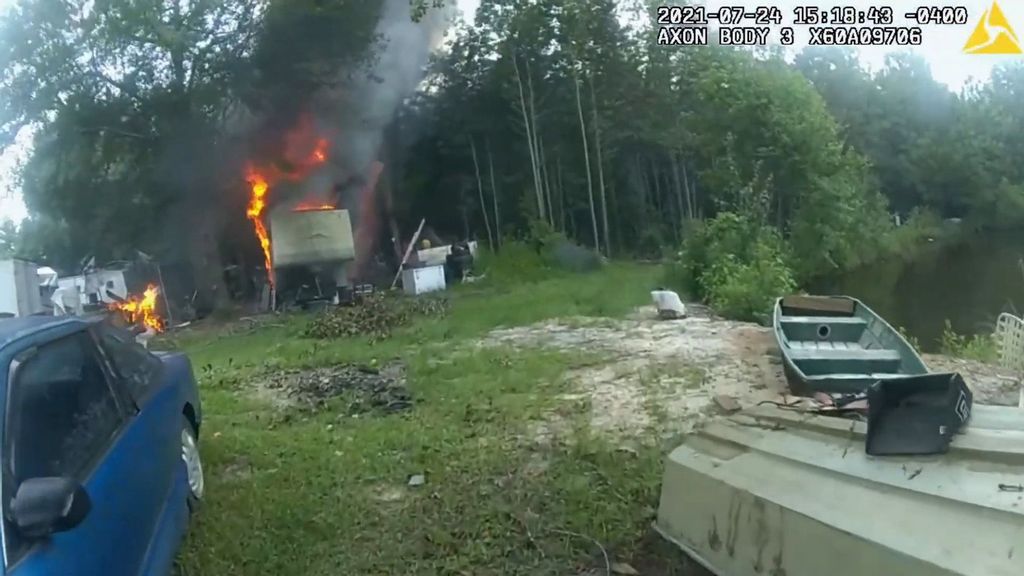 A pair of sheriff’s deputies turned the phrase “man’s best friend” on its head by rescuing two dogs trapped close to a trailer blaze in Candler County, Georgia.

One officer singed the top of his head and another burned his hands in the process of freeing the canines.

“Deputy Elliot Coursey and Captain Jamey O’Brien assisted the firefighters from Metter Fire Rescue in fighting this fire,” The Candler County Sheriff’s Office said in a statement about the July 24 blaze. “Deputies discovered a couple of four-legged friends that needed to be freed and moved away from the fire. Great job guys!”

The two cops were assisting Metter firefighters with the blaze when they heard two dogs barking in the distance.

As seen in the footage, officers ran toward the fire carrying bolt cutters. Once at the scene, they found one dog chained up and another inside a metal cage both near the blaze.

The body camera of the officer with the bolt cutters arrives on the scene with him saying: “hot, hot, hot” and “that’s too hot man” as he approached the flames.

He tries to use the bolt cutters to sever the collar, then looks at the chain to do the same before realizing it’s too thick. Instead, the officer decided to simply undo the collar.

The dog freezes for a second after being freed, and then runs away from the fire.

The two cops then turn their attention to a second dog, who was trapped inside a metal cage. One of the officers burns his hands on the cage bars as he tries to free the pet.

His colleague then uses the bolt cutters to grab the metal frame and pull it away, dismantling the cage and freeing the dog.

The two officers then join the fire brigade in working to extinguish the blaze.

As they worked to put the fire out, the crew realized propane gas tanks — which could explode — were located on one side of the trailer. They concentrated on dousing the flames near those tanks and removing them before putting out the blaze elsewhere.

It is unclear if people were living in the trailer, or it functioned as a storage unit. The cause of the fire was not immediately disclosed.