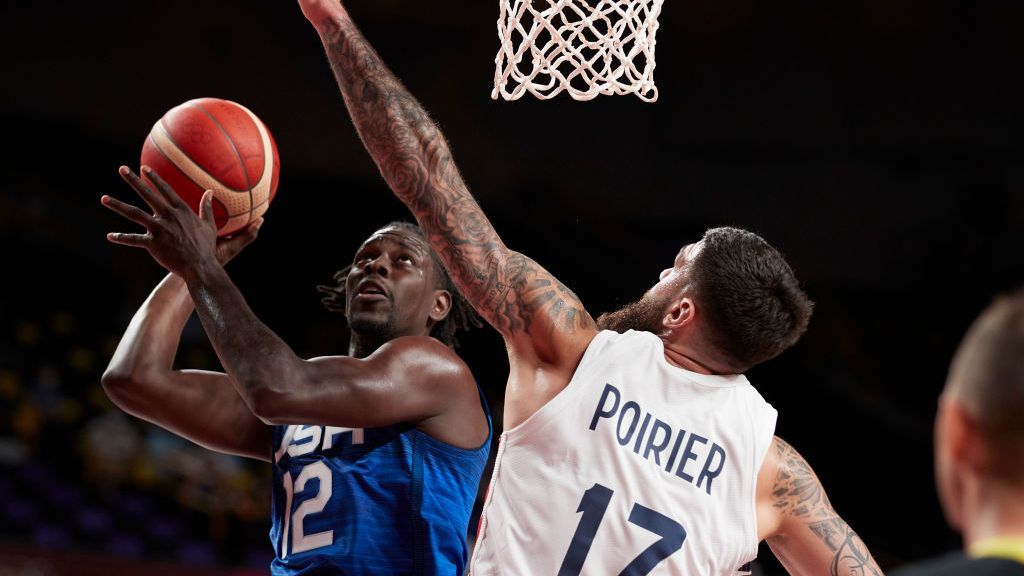 Jrue Holiday of USA and Vincent Poirier of France battle for the ball on day two in the Men's First Round Group A match between France and USA at the Tokyo 2020 Olympic Games at Saitama Super Arena on July 25, 2021 in Saitama, Japan. After their shocking loss to France, Team USA begins its quest for gold against Spain in Olympic quarterfinals.(Berengui/DeFodi Images via Getty Images)

If Team USA men’s basketball can pull out a win at the Olympics, nobody will remember the exhibition losses to Nigeria or the tournament opening loss at the hands of France. The real quest for the gold medal begins with an elimination game as the U.S. men prepare for the defending World Cup champions from Spain early Tuesday.

Despite their flaws, Team USA finds itself three victories from its fourth consecutive gold medal, which just a month ago seemed anything but certain. A disjointed team that was struggling to find its chemistry seemed poised for a collapse that would spin the basketball world off its axis.

According to FIBA, the governing body of international basketball, the United States is still the No. 1 team in the world while Spain is ranked No. 2. Spain will not be in awe of the Stars and Stripes, either — they are led by Pau and Marc Gasol, who have won NBA championships with the Los Angeles Lakers.

Meanwhile, Brooklyn Nets all-star Kevin Durant has rebounded in this tournament and become the all-time American Olympic scoring leader after his 3-for-10 shooting performance in the loss to France. Against the Czech Republic, Durant scored an efficient 23 points and played a solid all-around game. Durant’s versatility was center stage as he also chipped in with eight assists and six rebounds. In 19 Olympic appearances he has scored 354 points and grabbed 119 boards. Given the lofty standard he’s set playing in the world’s best league, his brilliance has been almost an afterthought on the international stage.

“It’s still pretty weird for me to do stuff like this because I play a team sport, and I try my hardest to make it about the group,” said Durant after the win over the Czech Republic. “But it is special to do something like that. Scoring is something I’ve worked on my whole career and expanded my whole career. To consistently do it is pretty cool.”

After the opening loss to France, which sent shock waves throughout the basketball world, this group of puzzle pieces is beginning to fit together. Jrue Holiday, the Milwaukee Bucks point guard who joined them as the tournament began, has seemed to bring the entire team together. When he was given the task of running the offense there was a rhythm they couldn’t find during a truncated training camp and exhibition games in Las Vegas.

If Team USA wins its next three games to win the gold medal the understated Holiday will join elite company. He would join Michael Jordan and LeBron James as the only players in history to win an NBA Championship and Olympic gold medal in the same year. He would also join his wife, Lauren, who won two gold medals as a member of the USA women’s soccer team.

Holiday has brought to Tokyo the same championship-caliber defense that was a catalyst for the Milwaukee Bucks’ 4–2 victory over the Phoenix Suns in the NBA Finals. He has been able to take advantage of international basketball rules, which allow him to be more physical when guarding the top backcourt weapon of the opposition.

However, he is seamlessly directing an offense that needs a maestro. Holiday is only averaging 12.3 points per game, but he’s made 54.3 percent of his three-point attempts, which was a concern for a team whose perimeter scoring was a problem until he arrived.

“I definitely wanted to be a part of the USA team and win the gold medal,” Holiday said. ”It’s late in my career, so me making it now has been awesome, and I’m super excited about it.”

Holiday’s matchup against Spain’s starting point guard Ricky Rubio figures to be key if the United States is going to reach the semifinals. Rubio is an international veteran with NBA experience and has been a part of Spain’s core for as long as the Gasol brothers. His constant defensive harassing of Rubio while trying to keep him out of the paint will go a long way toward determining whether Team USA will have a chance to leave Tokyo with a medal. Holiday finished their game against Slovenia and Dallas Mavericks all star Luka Doncic with 18 points, but it wasn’t enough to earn them a victory.

Spain and the United States are familiar with each other after meeting in major international competition for more than a decade. Team USA has won 16 of their last 18 matchups. In 2008, they met in one of the greatest gold medal games in Olympic history. The “Redeem Team” led by the late Kobe Bryant, LeBron James, DeWayne Wade and Carmelo Anthony were pressed to the last five minutes before pulling away for a 117–108 win.

While the Americans won the gold medal, that was a seismic shift in the landscape of international basketball. Team USA is regarded as the best team in the world, but the air of invincibility was no more.

Spain is projecting confidence despite heading into the knockout round matchup scheduled for 12:40 a.m. ET Tuesday morning. France’s victory over the United States gives the remaining challengers hope against the three-time defending Olympic gold medalists.

Holiday’s influence on the team’s chemistry can’t be overstated. He is giving prolific scorers like Durant and Jayson Tatum of the Boston Celtics a chance to flourish in coach Gregg Popovich’s perimeter-oriented system. These scorers have been able to play off the ball which suddenly turned the Americans into a prolific scoring unit that resembles what the five-time NBA championship coach wants to run.

Tatum is entering the quarterfinals coming off his best game of the tournament. He scored 27 points to lead the Americans in the final game of pool play, including 21 in the second half.

“We obviously had a slow start, but everybody just picked it up on defense and got stops, and the game just opened up in the second half,” said Tatum. “The way we were moving [the basketball], obviously, we’re starting to shoot the ball a lot better now than we did the first game, and we are getting more comfortable.”