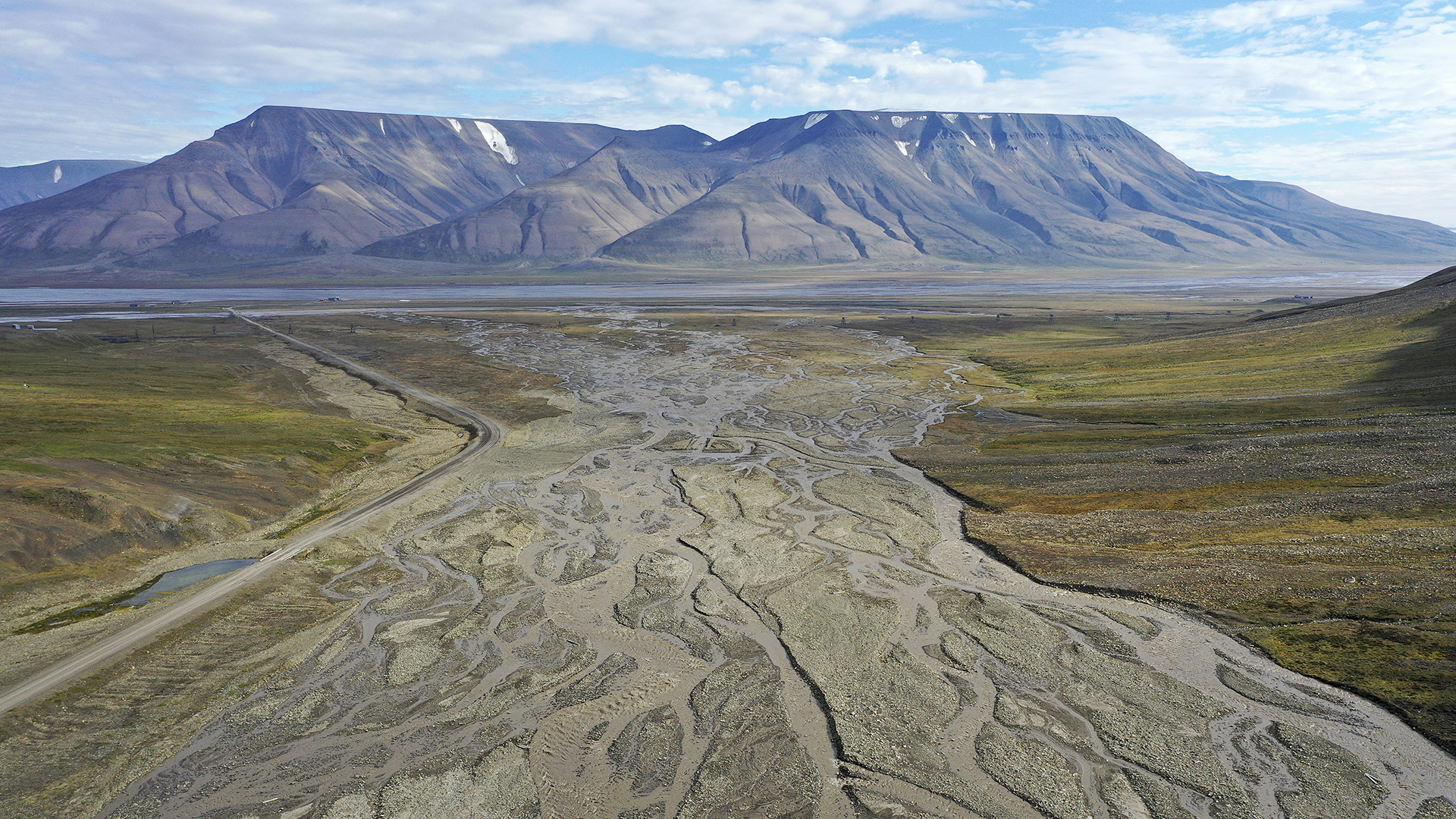 In this aerial view from a drone, meltwater flowing from the Borgerbreen and Nordre Bayfjellbreen glaciers flows toward Adventfjorden (Advent Bay) as mountains mostly bereft of snow stand behind during a summer heat wave on Svalbard archipelago on July 29, 2020 near Longyearbyen, Norway. (Sean Gallup/Getty Images)

ARIZONA CITY, Ariz. — Scientists across the world are calling for a better understanding of past extreme climate change events in an attempt to anticipate future changes.

“We’ve been putting a lot of chemicals into the atmosphere and changing the heat of the atmosphere for a long time, and really intensively for 150 years,” C. Michael Barton, geoarchaeologist and anthropologist at Arizona State University, said.

“And, things are still chugging along. Temperatures are slowly going up globally, but we haven’t seen a huge, dramatic shift. However, complex systems are potentially vulnerable if you push too much.”

Barton, also a researcher at the School of Human Evolution and Social Change, along with Foundation Professor Sander van der Leeuw and an international and interdisciplinary team, published their analysis on July 29.

The paper was published in the journal Nature Geoscience, which describes past abrupt climate changes, what led up to the “tipping points” for those events, and what followed.

Barton studies Earth’s many systems — specifically the water cycle and landscapes — and how humans alter these systems.

“People tend to look at how far you can push things before suddenly everything changes,” Barton said. “And, that’s what’s considered the tipping point.”

For a complex systems specialist like Barton, almost everything can be viewed as systems or cycles. A tree grows and dies, and the decay returns nutrients to the soil—water cycles through the Earth in different forms like rain, runoff, and evaporation.

Some of Earth’s major systems include the hydrosphere (water), the atmosphere (air), and the cryosphere (ice). All these systems are connected.

This research on tipping points looks at the history of these systems to quantify small changes that can lead up to an abrupt, massive change while also measuring how one abrupt change can trigger abrupt changes in other systems.

The paper explores prior research with sediment cores in the Gulf of Alaska, dust records in North Africa, and ice cores from Greenland. All of this pre-historic data gives Earth system modelers and scientists a better idea of what Earth was really like hundreds of thousands of years ago.

Scientists have also been extensively studying Earth’s oceans. This includes the current levels of salt and oxygen, changes in circulation patterns, and influxes of freshwater from melting ice sheets.

Current ocean conditions can be compared to historical data gathered from the composition of the ocean floor to make inferences about past ocean currents.

The authors are of the view that past instances of extreme climate events happening so quickly that humans either had difficulties adapting or were unable to adapt to the new environment.

For instance, about 1,500 years ago, abrupt cooling occurred in Europe, leading to changes in the vegetation. The authors note the cooling may have been caused by a natural phenomenon — volcanic eruptions.

The vegetation and farming changes were so extreme that people experienced famine and societal reorganization. This timing correlates with the transformation of the Eastern Roman Empire.

The authors note how climate events centuries ago triggered drastic changes or even collapse in ancient civilizations due to unforeseen societal vulnerabilities.

One example is the ancient city of Angkor, which was located in present-day Southeast Asia. The people living in Angkor altered the natural water cycle by diverting water to grow crops.

As the city grew, the water system in that region became so strained that it passed a tipping point. The system couldn’t handle more intense droughts and floods, and the city of Angkor collapsed.

Arizonans know that the last few years have been drier and hotter than usual. Barton said it’s not yet clear whether we’ve passed a tipping point in the Southwest region.

It’s normal to see slight fluctuations in precipitation and temperature year to year. But recent studies of ancient climate make Barton wonder if the drier weather patterns have become the new normal for our lifetimes.

“Past monsoon rains have shifted without warning and for unknown reasons,” he said.

“This can be catastrophic for human populations, as those who depend on the monsoon experience intense drought, while others do not have the infrastructure to handle the influx of water.”

“There are still gaps in this field of research. More raw data needs to be collected and quantified, and some existing data lacks the precision and quality needed to create test models and simulate future abrupt changes.”

The researchers also call for more analysis on the interactions between environmental systems and human societies during periods of climate change.

The authors hope this paper raises awareness of the field and that more people will understand how analyzing the long-term past could help us in the near future.

One component of tipping points research is identifying early warning signals. These are smaller fluctuations in a system before an abrupt change. The authors said these warning signals exist, but when the entire world is the focus, it can be challenging to trace how small changes in one system can warn of an abrupt change in another.

“There is evidence of past warning signals. For example, there were abnormal shifts in the climates of the North Pacific Ocean region and around Greenland before the major melting of Earth’s last ice age.”

“All the components can change really, really fast,” Barton said. “The whole system can drop into a different state. How do we know when we’re getting too close?”

The authors leave the reader with this final thought: “As humans, we try to anticipate the future.”

“We are now well aware that complex systems, including the coupled social and ecological systems that now dominate our planet, can undergo abrupt changes. If we cannot model abrupt changes in the past, we cannot hope to predict them in the future,” Barton said.

This paper is co-authored by 30 researchers across the globe, including Barton and Leeuw.