The infected migrants live in difficult conditions, forced constantly to be on the move, which worsens the problem.
By Eduardo Rubio August 2, 2021
Facebook
Twitter
Linkedin
Email 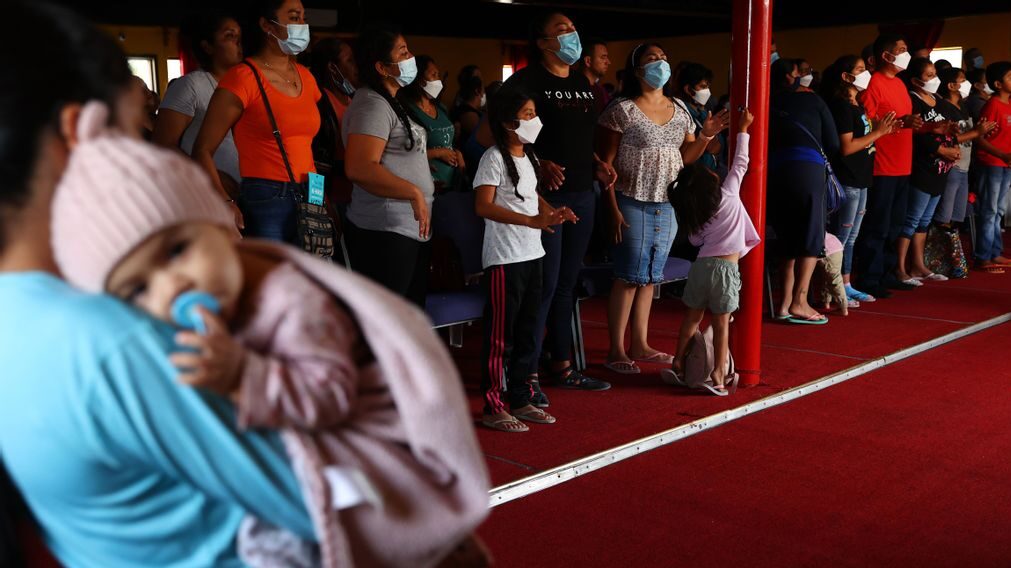 Migrant shelters in Tijuana, Mexico, are experiencing a chickenpox outbreak, in addition to the problems related to COVID-19. (Mario Tama/Getty Images)

Two Tijuana shelters in Tijuana and the migrant camp in El Chaparral registered numerous cases of chickenpox, mainly among boys and girls on July 1.

The Secretary of State Health, Alonso Pérez Rico, said in a press conference that medical personnel are maintaining a presence in the camps. He also said that management of chickenpox in the migrant community is complex due to the conditions in which they must live, and their nomadic lifestyle.

“Those who stay in the shelters do not always stay there. Some wander around, and many adults can have neurological complications,” he said.

The first shelter to send a warning about the health emergency was the Embajadores de Jesús, which reported it a month ago. According to the Ministry of Health, 650 people share the shelter, where 236 are children under 12.

The Integrating Center, which operates under the Secretariat of Labor, reported that there were 11 people from eight families with a high fever. The Ministry of Health confirmed Thursday that there are two minors still in isolation.

“They had come from another shelter and, as soon as the illness was detected, they were isolated,” said Pérez Rico.

The Integrating Center is a large warehouse repurposed to receive Central American migrants while they await their asylum process in Mexico — though nowadays it also receives Mexican migrants. It has a capacity for over 400 people.

In the particular case of the Embajadores de Jesús church, located in a rocky canyon to the west of Tijuana, there have been reports of 12 active cases, all of them underage boys and girls plus a woman who was already in recovery.

“The rest are in remission,” said Pérez Rico, after the tour through the shelters on Wednesday, during which he said that more than 350 minors were vaccinated.

The secretary said that, due to the lack of space and the high infection rate of the disease, they have asked the shelter to stop receiving more people. Those who get infected will not be able to leave until they recover.

At the same time, he downplayed the situation, saying that these are not the only chickenpox outbreaks in Baja California.

He said the main issue lies in complications due to inadequate treatment of the rashes and exposure to street dust.

“If we hadn’t made the epidemiological fences, if we didn’t follow them up, or if we hadn’t cared for the patients as we have had, maybe the outbreaks could have been a problem.”

Regarding the migrant camp set up in El Chaparral for those who seek asylum in Mexico, Pérez Rico said that they had found four cases that are now under observation.

El Chaparral has about 230 boys and girls under the age of 12 among the more than 1,000 inhabitants of the camp. The camp has suffered constant health problems.

The first was coronavirus. Then, the inattention to the camp’s portable toilets caused dysentery. And now, it is chickenpox.

“It’s just a matter of days. The camp will be relocated soon,” said the Secretary of Health about the dozens of tents installed at the border crossing for four and a half months.

He says that, as an authority, he knows about the chickenpox outbreaks and expects that a total of a thousand migrant children will receive the vaccine.

“There is a lot of uncertainty among these children’s parents, whether they were vaccinated. They don’t know what to do,” he said.

The low visibility of migrants’ struggles

The chickenpox outbreak among the migrant population began at the end of June, and it soon spread to five different shelters in a month, which shows a lack of attention from the health authorities in shelters, said Soraya Vázquez, of the binational organization Al otro lado, on its Tijuana headquarters.

She said that the first reported infections at the Embajadores de Jesús shelter, which has received hundreds of migrants, were not treated until the issue came to light.

She says the response from health officials was “so-so” and that vaccines were administered, though officials initially claimed that they did not have them.

“It is concerning that until there is a real crisis and the situation is dire, they do not intervene. That is what bothers people. Why don’t they have controls or do daily reviews of the sanitary situations in the shelters?”

She said that, due to the shelters already being overly saturated, the quarantines in these spaces have further harmed migrants who arrive seeking refuge.

According to the region’s Health Jurisdiction, out of the 232 cases, 95 percent are people in recovery.

Pérez Rico believes that with the epidemiological fences, the situation has already been addressed.

Vázquez said that, so far, they have not received reports of new infections. “Apparently, it is being controlled, but I believe the authorities must follow the outbreak very closely.”

«Previous Post
AstraZeneca Booster Shot Is In The Works, Australia Chief Disappointed In Response To Vaccine»Next Post
Fasting For More Than 5 Hours Could Hurt The Stomach