Vaccination rates are plateauing, but other paths to ending the COVID-19 pandemic are few and far between, say health experts.
By Carlin Becker August 2, 2021
Facebook
Twitter
Linkedin
Email 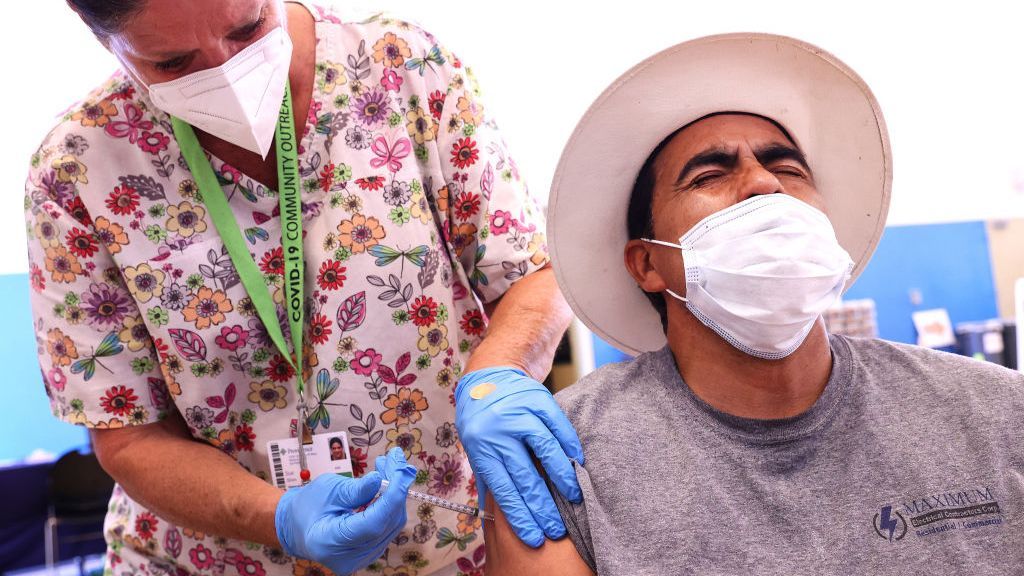 A nurse administers a dose of the Pfizer vaccine to a person at a temporary clinic in Wilmington, California, on July 29. (Mario Tama/Getty Images)

In the wake of the failure to reach President Joseph R. Biden Jr.’s goal of 70 percent of American adults receiving at least one vaccine dose by July 4, the White House has been less forthcoming with benchmarks against which to measure its progress in ending the COVID-19 pandemic.

Yet even as the Delta variant of coronavirus explodes across the U.S. — prompting the return of mask mandates even for the fully vaccinated, who can still spread the virus to the unvaccinated — experts told Zenger the only path back to normality remains getting more jabs into arms.

“It is pretty clear that the only way to ‘get back to normal’ is through vaccination,” said Mark Peterson, professor of public policy, politics and law at the University of California Los Angeles.

“Masking, social distancing, lockdowns and all of the various ways to keep people separated from one another … are only methods of partial mitigation in wait of vaccines.”

Almost a month on from Biden’s ambitious July 4 goal, Centers for Disease Control and Prevention figures on Aug. 2 showed America was finally edging toward his target — an estimated 69.9 percent of adults have now received at least one vaccine jab, with 163.8 million people, or 49.4 percent of the entire population, including children, fully vaccinated.

That still leaves just as many vulnerable to the virus, though — and despite widespread accessibility to both information about the available vaccines and the shots themselves, the nation has seen vaccination numbers stagger in recent weeks.

With the highly transmissible Delta variant now accounting for more than 80 percent of new cases in the U.S., COVID-19 hospitalizations increased nearly 50 percent from July 21 to 27 compared to the week prior. The resurgence of the virus in some 35 percent of U.S. counties, meanwhile, has led to a renewal of some pre-vaccine mitigation efforts.

The CDC, for instance, updated its masking guidelines this week to recommend fully vaccinated individuals wear masks indoors if they live in a place with “high” or “substantial” transmission.

It’s a frustrating return to social restrictions almost 18 months into the pandemic for many Americans — but it’s also one that’s been driven largely by the drop-off in the vaccination rate, said Rachel Nuzum, vice president of federal and state health policy at the Commonwealth Fund, a New York-based group that aims to improve public health care access and quality.

“In the absence of really getting the rest of the population vaccinated, in the meantime, there are things that we can revert back to, such as mask mandates, social distancing, doing more gathering outside, those types of things,” Nuzum told Zenger.

“Getting more people vaccinated is the best option,” said Hemi Tewarson, the executive director of the National Academy for State Health Policy. “In the interim for when there’s high transmissions, we’re going to have to think about masking and social distancing.”

Beyond another complete lockdown, those basic methods of transmission reduction — masks, distancing, and vaccines — remain the only instruments available to policymakers.

“I don’t think that anybody wants to start thinking about shutting down schools and shutting down businesses,” Tewarson told Zenger. “That would just be really difficult to do and really harmful to both kids and workers across the country.”

While Tewarson acknowledged the White House had since July 4 remained mum on its next objectives, she said the answer may lie outside raw “benchmarks, percentages and targets.”

“In terms of a goal or percentage, I think it’s more about how do you target the one-third [of adults] that’s not vaccinated?” she said. “It’s about setting some national strategies that are going to be taken up not just by the federal and state governments, but by others as well.”

One tactic the Biden administration has embraced there is a shift in rhetoric.

While White House press secretary Jen Psaki said last week the president does not want to “place blame” for the continuing pandemic on those refusing jabs, Biden has been less shy.

“We have a pandemic because of the unvaccinated, and they’re sowing enormous confusion,” Biden said on July 27, departing from months of more carefully scripted language about holdouts.

Biden has placed more direct pressure on remaining Americans who have not been vaccinated, and on July 29 took his first step toward mandating mass vaccination by announcing either inoculation requirement or regular COVID-19 testing for federal government employees.

Rules like that could be another way to ramp up numbers in the U.S., said Tewarson.

She noted companies including Netflix, Facebook and Google, as well as The Washington Post and Morgan Stanley, had already followed suit, “to address the concerns around employees who don’t want to have the transmission of the virus as they get back to work.”

New York State last month also unveiled the country’s first and only government-issued vaccine passport, which allows the vaccinated to show proof of inoculation before entering any business that requires evidence. Other states, though, have already banned requirements for such health passes being put in place by businesses — including Florida, Georgia, Alabama and Arizona.

However, there also still remains some low-hanging fruit in terms of raw rates.

COVID-19 vaccination is lower among young adults and children — but mostly because the group have not yet been heavily prioritized, rather than due to any overwhelming refusal.

“Young adults across all racial groups are less likely to be fully vaccinated,” Gabriel Sanchez, an expert in health policy at the University of New Mexico and a nonresident fellow at the Brookings Institution, told Zenger, adding the coming return to school will change that.

“These young adults, including those enrolled in colleges and universities, lack basic information about how to get a vaccine where they live and are highly receptive to small incentives,” he said. “Targeted outreach that addresses this information gap and continued use of incentives can go a long way toward seeing higher vaccination rates.”

“They’re kind of in that moveable middle,” Nuzum said.

Vaccines were not made available to children under 18 until this spring in the U.S., and doses for those under 12 years old are not expected to become available until this fall or winter.

“The majority of parents across the country will follow the suggestions of their child’s doctor,” said Sanchez, “so with more communication from pediatricians regarding the vaccine, we will hopefully see higher uptake among children for whom the vaccine is currently available.”

Beyond that, the options for moving forward from the pandemic are slim.

“Realistically, until we get vaccination rates much higher than they currently are, we will continue to see needless sickness and death,” said Karen Joynt Maddox, the co-director of the Center for Health Economics and Policy at Washington University’s Institute for Public Health.

“That’s not the most optimistic take, but I’m really concerned about the way out at this point,” she said. “We are squandering our best chance to protect ourselves, our loved ones, our communities, and frankly our economy by failing to get vaccination rates as high as they need to be.”