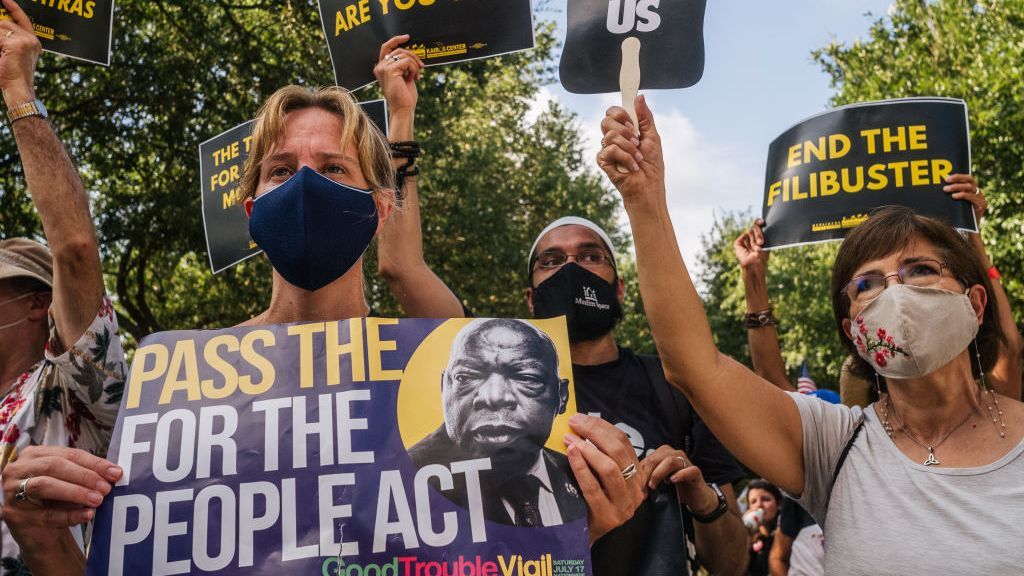 People display signs during the Georgetown to Austin March for Democracy rally on July 31, 2021, in Austin, Texas. Texas activists and demonstrators rallied at the Texas state Capitol after completing a 27-mile-long march, from Georgetown to Austin, demanding federal action on voting rights legislation. (Brandon Bell/Getty Images)

Congress is heading into recess amid a nationwide battle over election security and voting rights.

Democrats and the White House have launched several efforts to combat dozens of new state laws or pending pieces of legislation that restrict voting, with little success so far. Lawmakers in the House departed Capitol Hill on Friday, with their Senate colleagues following suit this week. Neither chamber is expected to return in full until mid-September, but voting rights activists remain hopeful that their fight isn’t over.

“All options are on the table,” Aaron Scherb, director of legislative affairs at Washington, D.C.-based watchdog Common Cause, told Zenger. “There have been and continue to be a lot of family discussions that are occurring in the Senate Democratic caucus. There will have to be a lot of discussions behind closed doors still to figure out a way to get this done.”

Following former President Donald J. Trump’s claims of election fraud after his defeat to President Joseph R. Biden Jr. in November, many Republican-led state legislatures have passed or are in the process of passing bills aimed at strengthening election security with measures such as restricting mail-in ballots and early voting, and imposing more stringent voter identification requirements.

Over 400 bills with provisions that restrict access to voting in 49 states have been introduced during the 2021 legislative sessions, according to the Brennan Center, New York University’s nonprofit law and policy institute. So far this year, at least 18 states have enacted 30 such laws.

Voting rights advocates and Democrats have likened the GOP’s efforts to voter suppression, arguing that the rules intentionally make it harder for Americans to vote.

In response, at least 30 voting rights-related lawsuits have been filed in eleven states this year, including nine in Georgia, where the Department of Justice is challenging a new voting law that contains several significant changes to the state’s voting procedures. Nine additional cases filed in 2020 are ongoing.

At the national level, Democrats in Congress have been trying to push through two major voting rights bills this session that would undo many states’ restrictions.

The For the People Act, a sprawling bill that would establish automatic voter registration and expand early voting, among other provisions, passed in the House in March. Senate Republicans, framing the legislation as a Democratic power grab, blocked a debate on it in the chamber last month.

After passing in the House under a different name in 2019, the John Lewis Voting Rights Advancement Act has since failed to progress any further, with all Republicans in the Senate except Sen. Lisa A. Murkowski (R-Alaska) refusing to bring it up for a vote last year. It aims to restore and strengthen elements of the 1965 Voting Rights Act that were struck down by the Supreme Court’s 2013 decision in Shelby County v. Holder.

Although Democrats now hold a slight majority in the Senate, the bills are still expected to face major hurdles when lawmakers return to session. The bills will have to gain enough Republican support to pass, but some conservatives have argued that their liberal counterparts are merely trying to protect their own political power.

“The For the People Act, despite the recent minor revisions, still amounts to a major Democratic power grab in Washington to the detriment of American voters from both sides of the aisle,” Adam Brandon, president of the liberatarian-conservative advocacy group FreedomWorks, said in a statement.

“National Democratic leaders have identified election integrity bills and this grassroots reform movement as a serious threat to their political power, and they are mobilizing all their resources to fight it,” Anderson said. “The progressive Left has spun up a false narrative to smear the state bills as ‘Jim Crow 2.0’ and repeatedly misled the public about the legislation.”

The act’s difficulty in the Senate “demonstrates that the American people don’t buy this narrative,” Anderson said. “Democrats are now focusing on their backup plan, [the John Lewis Voting Rights Advancement Act]. The details are different from their first bill, but the goal is the same: a federal takeover of election procedures.”

But Common Cause’s Scherb countered that most voters actually support the bills. Recent polling by the think tank Data for Progress shows 69 percent of respondents favor the For the People Act, including a majority of the Republicans surveyed.

“Fifteen or 20 years ago, these bills likely would have had strong Republican support in the Senate. In fact, these bills are bipartisan,” he said. “They’re supported by broad swaths of Americans — Democrats, Republicans, independents — and many of the provisions in the For the People Act have passed in purple and red states already, so it’s really just among congressional Republicans that the bill isn’t bipartisan.”

Still, at least 10 Republican senators would need to be convinced to vote in favor of the bills for either to overcome a 60-vote filibuster in the chamber, which Scherb admitted is unlikely. Filibuster reform, he said, could instead provide the most viability.

For some time, Congressional Democrats have been toying with the idea of eliminating the filibuster to pass major voting rights legislation. But the tactic could prove an impossible feat as some party members, such as Sens. Joe Manchin (D-W.V.) and Kyrsten L. Sinema (D-Ariz.), have already signaled opposition to the proposal. Manchin has noted, however, that he’s open to lowering its vote requirement to 55.

Another filibuster reform option Democrats have floated is adjusting the rules to provide a “carve-out” for voting rights.

The proposal is gaining traction within the party. Sen. Mark R. Warner (D-Va.), who in 2013 questioned then-Senate Majority Leader Harry M. Reid (D-Nev.) for opening the door to changing the filibuster rules for Supreme Court nominees, is the most recent Senate Democrat to endorse an exception to the filibuster for voting rights legislation. A group of House Democrats have also embraced the idea, further feeding optimism that the approach could work.

However, should the federal legislation still fail to pass once Congress reconvenes, both the White House and the Democratic National Committee can take steps to advance their cause.

The Biden administration has made voting rights a major pillar of its agenda, and the president recently tapped Vice President Kamala Harris as the White House’s “czar” on the issue. In her first move, Harris announced earlier this month the “I Will Vote” campaign, which includes a $25 million investment from the Democratic Party to bolster voter education, protection, registration and access.

The money will fund the creation of a DNC team that will use data and other tools to contact people who may be affected by voting restrictions or were purged from voter rolls. The funds will also be used to register voters, litigate voting rights cases and launch an advertising campaign to inform voters on how to register, when and where to vote and to promote Biden administration achievements.

“The White House can harness the power of the government by making federal agencies more active in facilitating access to voter registration and voting,” Corey Goldstone, senior communications manager at the Campaign Legal Center, told Zenger.

President Biden also used a March executive order to expand access to voter registration and election information by compelling the heads of each federal agency to evaluate ways to increase both Americans’ opportunities to register to vote and their ability to obtain information about and participate in elections in a manner consistent with state laws.

While the agencies were given 200 days to develop concrete plans, there are a number of actions already at the administration’s disposal, according to Goldstone. These include utilizing the Department of Education to assist institutions in registering student voters, ballot requests and voting, and the Department of Housing and Urban Development initiating voter registration efforts with its connections to underrepresented voters.

Other avenues include modernizing Vote.gov, the federal website dedicated to providing information to voters, and requiring federal contractors to give their employees paid time off to vote.

The Biden administration has so far largely focused on pushing Congress to pass legislation, promoting the issue through a series of high-profile appearances and speaking engagements, and meeting with civil rights leaders and other voting rights advocates. If unable to make an impact on Capitol Hill, the White House is expected to attempt to overcome barriers at the ballot box by placing a major emphasis on voter turnout after Democrats’ organizing efforts drove a record number of voters to the polls in 2020.

Ultimately, though, it’s the pieces of national legislation that stand to make the biggest impact on future elections — whether or not they succeed.