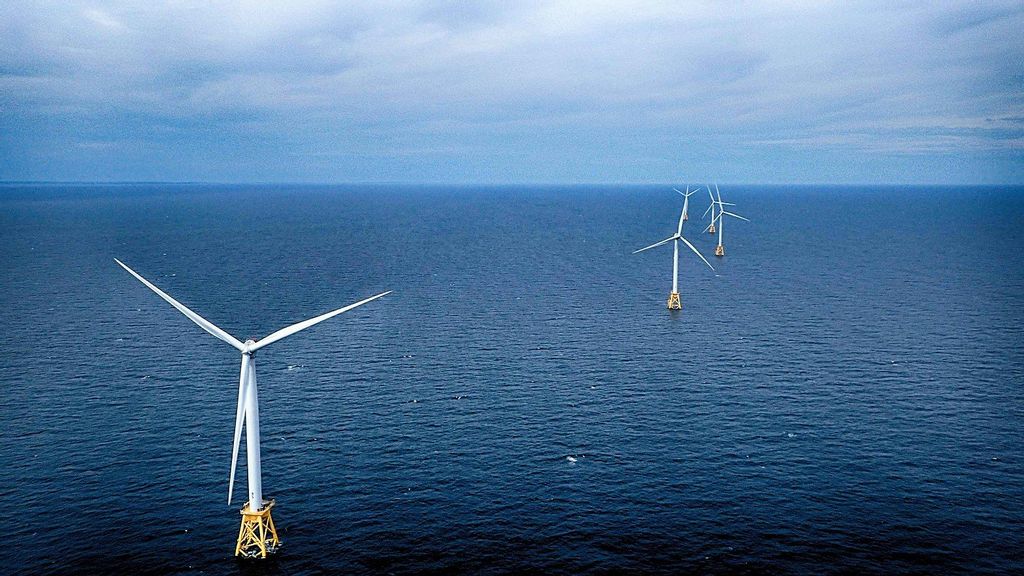 The nation's first offshore wind farm is 3 miles off the shore of Block Island, Rhode Island. The project began operations in 2016. (Wikimedia Commons)

Since the Block Island Wind Farm began operating off the coast of Rhode Island in 2016, many commercial fishermen have pushed back against the industry. They claim the turbines are navigational hazards and obstacles to ocean access.

“There’s no way you’re going to build a major series of structures over any large amount of water without impacting commercial fisheries,” he told Zenger.

Marchetti said commercial fishing takes places year-round, in all weather conditions. Even with radar technology, he said, wind turbines can be navigational hazards in the fog and rain.

Jon Grant, a lobsterman based out of Block Island, said most of the commercial fishermen and lobstermen he knows are against offshore wind farms.

Marchetti said that while developers of the Block Island project worked with fishing groups “more than less,” he is worried about the impact of the Vineyard Wind project off of Martha’s Vineyard, Massachusetts, and the proposed South Fork wind project off of Rhode Island.

A Bureau of Ocean Energy Management (BOEM) report in May on Vineyard Wind said: “Due to the placement of the turbines it is likely that the entire 75,614 acre area will be abandoned by commercial fisheries due to difficulties with navigation.

“The extent of impact to commercial fisheries and loss of economic income is estimated to total $14 million over the expected 30-year lifetime of the project.”

The Rhode Island Fishermen’s Advisory Board voted in 2019 to accept roughly $16.7 million from Vineyard Wind to help mitigate possible economic hardships to Rhode Island fishermen who would have to move their fishing areas.

Marchetti said it is not clear how fishermen will access the money.

South Fork Wind Farm on June 1 agreed to reduce the number of turbines for the project to 12 from 15, and offered Rhode Island fishermen a $12 million compensation package. The fishermen said the package is inadequate.

Vineyard Wind South, a 130-turbine wind energy project being developed off the shore of Massachusetts, faced opposition from fishermen during public meetings in July.

Meghan Lapp, a representative for two Rhode Island commercial fish processor dealers, said at a July 19 meeting that commercial fishermen risk loss of livelihood and loss of life due to the new wind projects.

Among the wind farm supporters was Martha’s Vineyard resident Tom Soldini. He said Vineyard Wind South is “critical” to helping Massachusetts meet its commitment to reducing its reliance on fossil fuels.

Daniel McInerney, representing the International Brotherhood of Electrical Workers, said he looks forward to “a chance to see the region get back a little bit of its luster that it once had” through new job opportunities in offshore wind.

Rhode Island legislators voted last month to advance the South Fork Wind Farm, despite its controversial location in Cox Ledge. The area is an important habitat for Atlantic cod and a prime fishing location, according to Mike Jarbeau, Narragansett Baykeeper for Save the Bay, a nonprofit.

“We only get one chance to do it right,” Jarbeau told Zenger. “All these turbines, once you go in and start drilling and putting in the turbine foundations, you can’t really take that back.”

Some residents of Block Island say the nation’s first offshore wind farm in their backyard is a success — largely because of the amount of input they had.

“There were many, many meetings. There was lots of tearing of hair. There were friends who wouldn’t speak to each other anymore because of opposite positions on this issue,” said Sam Bird, a retired facilities’ manager on the island.

“What we really needed to pioneer was the permitting process: addressing all the issues posed by the stakeholders, and how that overlays with our government processes,” said Bird.

Kim Gaffett, former Block Island first warden who worked on the plan, said the process got all the stakeholders involved, ensured that everybody listened to each other and got people to understand each other’s perspectives.

“Anytime you have something controversial, and you can figure out a way to get all the parties in the room having a conversation as often as possible, that’s a good place to be,” she said.

«Previous Post
A Heavy Message: Native American Activists Deliver 5,000-Pound Totem Pole To Washington DC »Next Post
Women Rot in Prison in El Salvador — Where Abortion is a Crime and Miscarriage Can Look Like One