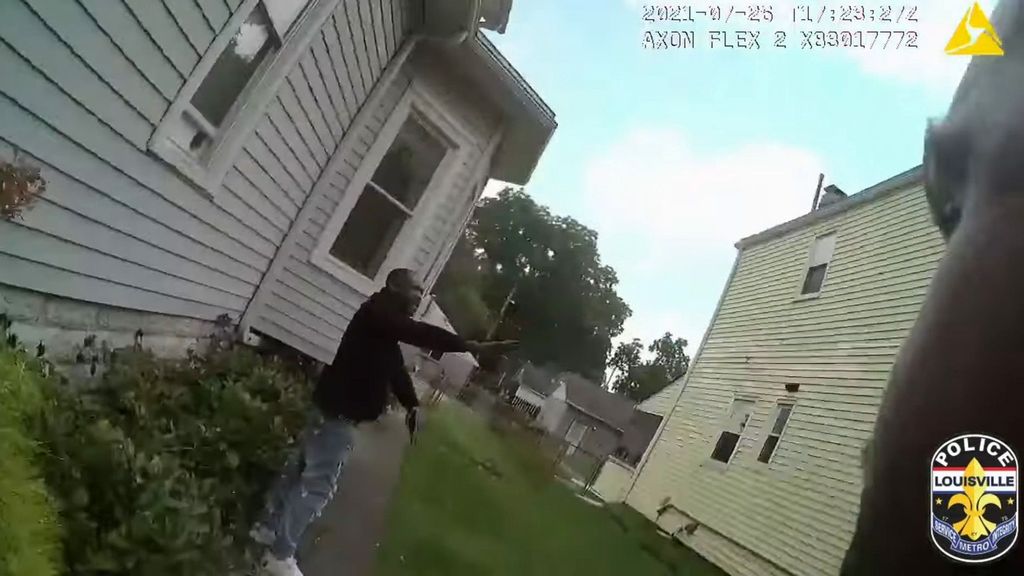 The shooting suspect Laron Weston before being disarmed by police officers in Louisville, Kentucky, on July 26, 2021. (Louisville Metro Police Department/Zenger)

A man accused of shooting two women was tackled to the ground by a Kentucky cop and begged the officer to “kill me please,” according to video of the incident.

The arrest took place on Manslick Road in Louisville, Kentucky, on July 29.

The Louisville Metro Police Department said the man is suspected of shooting two women in a parking lot on Monday afternoon. The two victims were wounded with what police said are likely non-life-threatening injuries.

The suspect, identified as Laron Weston, was spotted by the police on Thursday during a traffic stop, and a car chase ensued that resulted in Weston crashing a Hummer vehicle in the neighborhood of Beechmont. The crash resulted in roughly $1000 worth of damage to another vehicle, according to the arrest report.

In the body-camera video, Weston is seen standing still outside a house as two officers advance on him.

Holding his hands in the air but still in possession of his firearm, Weston is tackled to the ground by Officer Joseph Hardison, and disarmed.

While being detained on the ground, the suspect repeatedly asked the cop to “kill me please.”

As Weston begged the officer to take his life, Officer Hardison removed the suspect’s gun from his grip. The police said it was the same firearm that was used to shoot the two women on Monday.

Approximately 10 to 29 percent or more of officer-involved shootings involve “suicide by cop” incidents, in which a suicidal person purposefully escalates a situation with police to provoke the use of lethal force, according to a 2016 study published in Science Direct. It’s unclear if Weston was previously known to struggle with mental illness.

Officer Hardison was then joined by Officer Mike Faulkner who assisted with the arrest.

Weston was taken to the patrol car in handcuffs and the police said no one was injured during the arrest.

Weston faces multiple charges, including fleeing or evading police, assault, wanton endangerment, and possession of a firearm by a convicted felon.

The police said he also has a criminal record of previous felony arrests outside of Jefferson County. Weston is currently under home arrest after posting cash bail.

Weston had been on probation for a five-year sentence following a felony conviction in 2019, according to the Kentucky Department of Corrections.

If you are feeling suicidal, thinking about hurting yourself, or are concerned that someone you know may be in danger of hurting himself or herself, call the National Suicide Prevention Lifeline at 1-800-273-TALK (1-800-273-8255). It is available 24 hours a day, seven days a week and is staffed by certified crisis response professionals.

«Previous Post
One In Four Prisoners Is Indigenous In Australia State»Next Post
VIDEO: Deputy Under Investigation After Pinning Teen Girl On The Ground