VIDEO: Deputy Under Investigation After Pinning Teen Girl On The Ground

The Texas deputy, who had received calls saying the 18-year-old was jumping in front of cars, believed she might be suicidal. 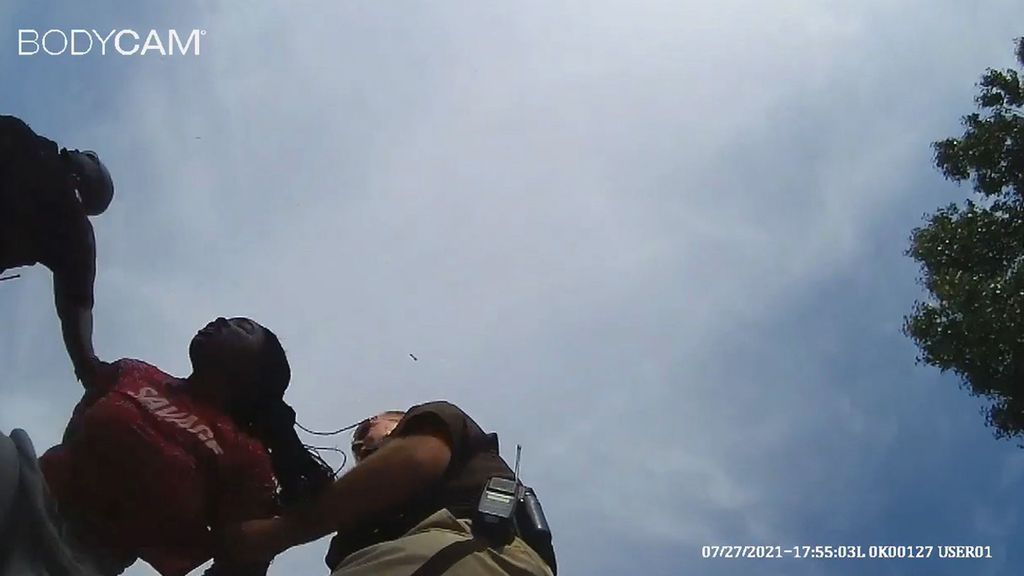 Nekia Trigg is handcuffed by a Kaufman County sheriff's deputy after he asked her not to walk away. “We got a call you were jumping out in front of cars. I can't let you go walking off," the deputy says. (@kaufmansheriff/Zenger)

A sheriff’s deputy in Kaufman County, Texas, has been placed on administrative leave during an investigation of his role in an incident that involved an 18-year-old being pinned to the ground on Tuesday.

The sheriff’s office has body cam video of the incident. In the video, the deputy approaches the young woman, identified as Nekia Trigg, as she walks along the sidewalk, crying. He repeatedly asks her what’s wrong, why she is crying, what her address is, where her mother lives, and says that he is trying to help her.

He takes her arm and says she needs to stay where she is. She repeatedly asks him not to hurt her while he holds her arm.

“I’m not here to hurt you,” the deputy says. “We got a call you were jumping out in front of cars. I can’t let you go walking off.”

He tells her he has to handcuff her and asks her to sit down. That’s when his body camera falls off.

The next scene shows Trigg on the ground, with a group of people standing around yelling and asking the deputy why his body cam went off and why he was “sitting on my daughter.”

Trigg’s mother, Antanique Ray, who soon arrived at the scene, eventually struck the deputy, identified only as Martin.  Ray was arrested on charges of assault on a public servant and interference with public duties, as well as two outstanding warrants. She was released on bond the next day.

Trigg was rolled over on the ground and handcuffed, with the deputy pinning her down with his body and holding her wrists, other video posted online shows. She was taken to a mental health facility for evaluation.

After the body cam video was released, the sheriff’s office said the deputy used a jujitsu restraining technique that did not obstruct Trigg’s breathing in contrast to what she claimed in the video.

“The Kaufman County Sheriff’s Office remains committed to transparency and cooperation with our community. Any complaint against this department is taken with the seriousness it deserves and will be followed with a complete and thorough investigation,” a statement from the office says.

After Ray bonded out of jail, she told local media: “The only thing I was trying to do was to check on my daughter. When I saw the officer on my daughter, it was nothing but God that allowed me to stay as calm as I was. I’m her first protector.”

Former Arlington, Texas, Assistant Police Chief James Hawthorne said he struggled to find any intentional misconduct after watching the video. He said police officers are allowed to take action when dealing with people who are possibly suicidal.

“There are times when you have to do that,” he said. “We try to place them into custody or restrain their movement so that they don’t hurt themselves.”